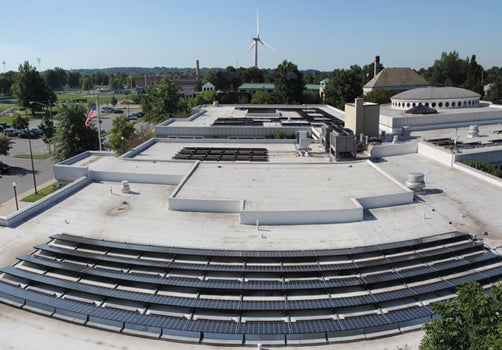 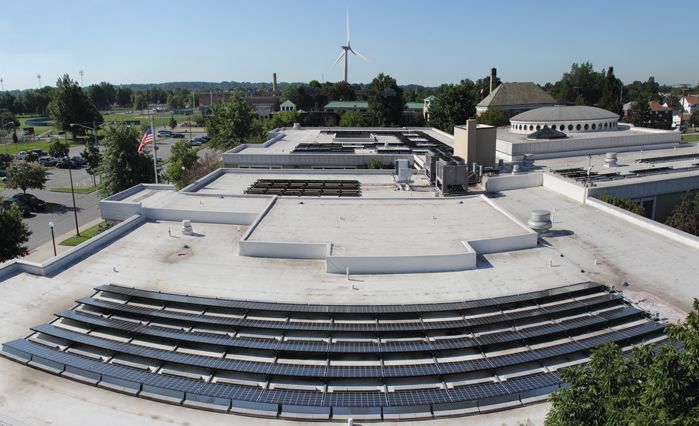 The City of Euclid and Euclid Public Library partnered to install photovoltaic solar panels on their rooftops in one of the largest joint public projects in Ohio. The city and the library worked with Ohio Cooperative Solar (OCS), an employee-owned energy cooperative, by leasing their rooftops to OCS for the installation of the solar systems and by purchasing electricity from OCS.

“We are proud to be partnering with OCS in a cooperative effort to produce clean renewable solar energy and to create jobs in the Cleveland area,” said Mayor Cervenik.

“Being the first library in our state to work on a cooperative solar project is a significant step,” said Euclid Public Library Director, Donna Perdzock. “Both the city and our library are taking large strides toward adopting measures to go green. This project is paving the way toward a more responsible use of energy for the next generation.”

“With utility costs anticipated to continue to increase each year, over the life of the contract the energy produced by the solar systems will cost less than that provided by the utility company, resulting in annual savings to both the library and the city,” Cervenik said.

In addition to offsetting nearly 150 tons of carbon dioxide per year, the project includes an important educational component providing information to Euclid residents and businesses about the potential benefits and cost savings of solar energy. The library and city hall have electronic displays (kiosks) in their buildings that provide “real time” information on the amount of energy being produced and the amount of carbon dioxide being offsetted by using solar panels to generate electricity.

The project was funded in part through an Energy Efficiency and Conservation Block Grant from the U.S. Department of Energy as a part of the American Recovery and Reinvestment Act of 2009. OCS who designed and installed the solar system is a member of the Cleveland-based Evergreen family of cooperatives, which is funded in part by the Cleveland Foundation. The Evergreen Cooperatives are pioneering innovative models of job creation, wealth building and sustainability.

Mayor Bill Cervenik concluded the ceremony by stating, “From wind turbines to solar panels, from building upgrades to efficient traffic lights, from habit restoration to curbside recycling, the Euclid community cares about their environment and economic future. Going green is about sustainability, not only environmental sustainability. All of these projects are good for our planet but they are also good for our economy and budgets.” The work that public and private members of the community are undertaking shows that Euclid is taking its environmental and economic well-being in its own hands and steering the course for a prosperous future.