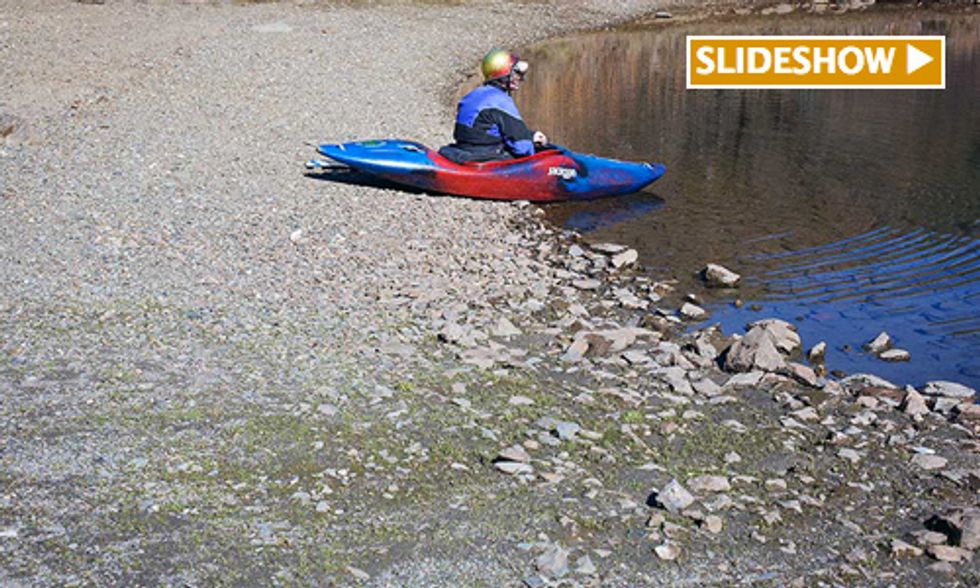 The historic drought in California has dredged up old feuds over who can lay claim to water in a thirsty state. As the powerful lobby for the agricultural industry—which currently consumes 80 percent of California's water supply—cries for more water to be pumped to their farms in the arid regions of the Central Valley, just who would be left high and dry?

California's record-breaking drought brought many things long submerged back to light when the water line dropped. Long abandoned cars were discovered in shallow rivers, ghost towns emerged at the bottoms of lake beds, and glints of gold in the near-dry streams sent amateur prospectors hotfooting it back into the hills.

What also re-surfaced were the old and ugly battles over who can claim rights to what has historically been California's most precious resource: water.

On Jan. 17, Gov. Brown (D-CA) declared a drought emergency, announcing the lowest total rainfall in the state's 163-year history and asking residents to voluntarily reduce their water use.

Buried in the declaration was a clause that suspended water quality protections, allowing the California Department of Water Resources and the state's Water Boards to let saltier, warmer water flow through the rivers and estuaries, putting endangered fish species like the delta smelt at risk.

At the heart of California's water politics is the Sacramento-San Joaquin Rivers Delta, which, together with the San Francisco Bay into which it flows, is the largest estuary on the west coast of the Americas. The Delta supplies water to farmland that produces almost half the nation's fruits and vegetables. It is also home to hundreds of species of plants and animals, some found nowhere else on Earth.

Gov. Brown has been championing a massive tunneling proposal that would divert water directly from the Sacramento River, bypassing the Delta and sending it south, primarily to Kern County and the Westlands Water Districts, two water agencies that currently receive the majority of the freshwater exported from the Delta.

The shortfall of fresh water flowing through the Delta would further degrade an already taxed ecosystem, jeopardizing both native species and the local economy. Brown, who was also governor during the 1977 drought, proposed a similar water funneling plan at that time. That project, dubbed the Peripheral Canal, was rejected by voters in a 1982 ballot measure, but became the focus of a north-south battle over water.

The latest drought has reignited old water rights tensions as politicians and corporate interests seize upon the scarcity of water as a political tool. Standing in a parched field in California's Central Valley in January, U.S. House Speaker John Boehner (R-OH) referred to the catastrophe as a “man-made drought” and called for more freshwater to be pumped from the Delta to corporate agriculture.

“How you can favor fish over people is something people in my part of the world would never understand,” Boehner said.

Had he looked around, he would have seen the faces of many other farmers, fishermen, Native Americans and consumers whose lives would be disrupted by a mega-water grab.