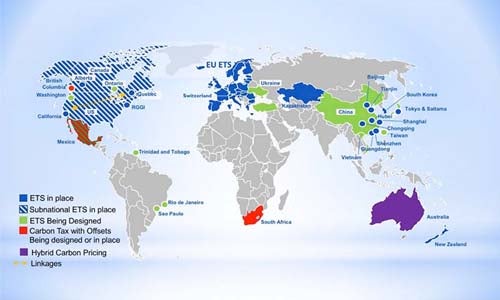 Worldwide, carbon pricing has become a cornerstone policy tool for tackling climate change. Regions pricing carbon have grown exponentially since 2009—with the majority of this “bottom-up” growth taking the form of greenhouse gas cap-and-trade programs.

According to the International Carbon Action Partnership’s Status Report 2016, 40 percent of global GDP is covered by an emissions trading system (ETS)—a figure projected to increase to 49 percent in 2017. By this time next year, some 16 percent of global emissions will be covered by ETS, up from only 4 percent in 2004. Eyes are especially glued to emerging market developments across the Pacific Rim, including the world’s largest GHG emitter, China, which plans to launch a national cap-and-trade program in 2017.

At the international level, additional momentum for carbon markets came with the adoption of the Paris agreement at the 21st Conference of the Parties (COP21) to the United Nations Framework Convention on Climate Change (UNFCCC). Article 6 of the final agreement signals a clear role that markets will play to help countries reach their national post-2020 climate targets (or “Nationally Determined Contributions” in UNFCCC speak). Specifically, Article 6 allows for cooperative efforts or emissions trading among “bottom-up” carbon markets and sets the general framework for a new UN global crediting mechanism to support sustainable development.

Paris also resulted in 18 national signatories, including the U.S., Canada and Mexico, to the New Zealand-led Ministerial Declaration on Carbon Pricing. The joint declaration supports the role of markets in the Paris agreement and will see signatories collaborate to on future market design, linking and common standards, rules and best-in-case tools.

On April 22, a number of countries will reconvene when the Paris agreement officially opens for ratification. This high-level New York ceremony is an important milestone, signaling the dawn of a new era for global climate cooperation and action. But after New York, the real work begins: negotiators now face a mountain of agreement implementation activities (e.g., form and governance of a new UN sustainable crediting mechanism) and governments must now follow through on national measures to achieve promised climate targets.

Today’s action-packed North American carbon landscape gives reason for optimism. However, the regional fragmentation—combined with ebbs and flows of policy, politics and macro-economic trends—reminds us that considerable uncertainty remains to (and through) 2020.

The continent is characterized by a “mixed-bag” of subnational carbon pricing policies. In British Columbia, we see a carbon tax alongside a newly-implemented benchmark ETS (with only BC-based offsets) for growing industrial emissions. In Alberta, we see a long-standing, but now swiftly-evolving, benchmark ETS (with only Alberta-based compliance offsets) for facilities emitting more than 100 kt CO2 a year. We also have cap-and-trade programs in California-Quebec (and soon to be Ontario and Manitoba) and the Regional Greenhouse Gas Initiative, covering power sector only emissions across nine U.S. North East states.

Nationally, Canada has entered into a brave new climate world with a changing of the guard at the federal level. Prime Minister Justin Trudeau met with all 10 Canadian provincial and territorial Premiers in early March, resulting in the Vancouver Declaration—an agreement that commits federal and provincial governments to collaborate on a Pan-Canadian climate plan, which includes a future carbon pricing approach. Canadian leaders will reconvene in October 2016 to finalize the plan.

Beyond those listed above, many states are exploring emissions trading (or “trading ready”) options to help meet future compliance with the U.S. Environmental Protection Agency’s (EPA) Clean Power Plan (CPP) rules. But, in a recent blow to some of this state-level momentum, February saw an unexpected decision by the U.S. Supreme Court to “stay” further CPP action by the federal Agency. As a result, states are no longer required to submit their initial CPP compliance plans until outstanding legal questions, namely related to EPA exceeding its regulatory authority, are resolved—questions unlikely to be answered until 2017 or 2018.

In the meantime, developments at the subnational level will continue to define North America’s climate landscape:

In late-February, Ontario unveiled its provincial cap-and-trade regulatory proposal and enabling legislation. The province plans to hold its first allowance auction in March 2017, then link to Quebec and California as soon as possible and practical.

Another U.S. federal twist was added when, mere days after the Supreme Court decision, Justice Antonin Scalia, one of the strongest Court opponents to CPP, passed away. The plan’s future now becomes entangled with the highly-politicized process of nominating Scalia’s replacement amid a heated election year.

Although North America has been slow to embrace emissions trading as a tool to fight climate change, the swell of activity in recent years is encouraging. The fact that more policymakers are turning to markets instead of other pricing instruments is testament to the many virtues of cap and trade, such as lower cost, flexibility and achievement of environmental goals. The stage is set for markets to get even bigger in the Americas and beyond.

Katie Sullivan is the director of The Americas and Climate Finance at the International Emissions Trading Association.