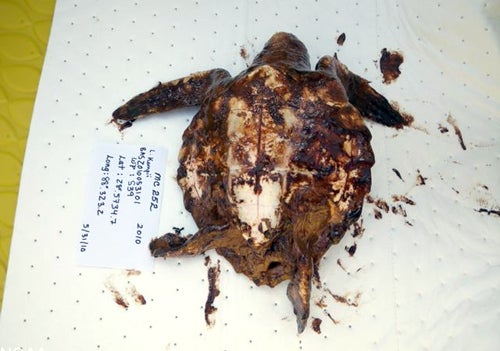 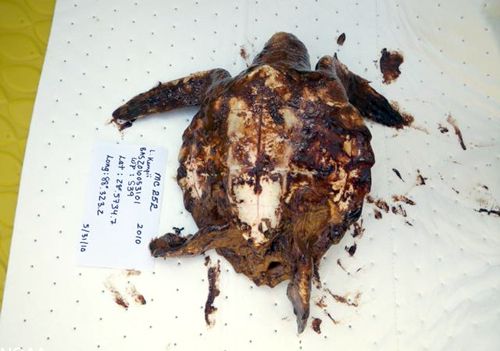 Greenpeace today released shocking photos that show graphic evidence of the destruction done to endangered sea life in the Gulf by the 2010 BP oil disaster. The photos, just received via a Freedom of Information ACT (FOIA) request filed in August 2010, appear to be part of the effort to collect evidence for the prosecution of BP and others, but have never been published by the government.

The images—oil-covered sea turtles, sperm whales and dolphins—call into question claims made by BP and the White House about the damage done to endangered and threatened Gulf species.

“These images of dead sea turtles, completely covered in oil, present a very different picture than what we were told by U.S. officials,” said John Hocevar, a marine biologist with Greenpeace. “While the White House was trying to keep the emphasis on rosy stories of rescued animals being released back into the wild, they were sitting on these images of garbage bags full of Kemp’s Ridley sea turtles.”

On Friday, BP won a delay for the civil trial that would assign damages from the disaster, the worst marine oil spill in U.S. history, and further U.S. legal actions to apportion accountability for the disaster have yet to get fully underway. The money from these decisions will largely go to help clean-up and restoration efforts for these critically endangered habitats, which makes their delay all the more troubling to environmental groups.

“We remain concerned about what else BP and the government scientists saw, what else they documented but never showed the public,” Kert Davies, Greenpeace research director said. “These photos are a grim reminder of the real damage that reckless oil corporations cause and also remind us never to stop pushing for transparency and accountability from Big Oil and the government that supposedly regulates its activities.”

Greenpeace sent a letter to prosecutors at the Department of Justice and Attorney General Eric Holder, copied to the chairs of the Congressional Judiciary Committees, ensuring that they see these images and requesting that the Justice Department follow up in order to hold those responsible accountable for the disaster.

The letter states, in part: “We’re writing today to state clearly our conviction that any resolution of the [BP] disaster short of full criminal prosecution of all responsible parties will be a dereliction of duty by your department and a betrayal of the trust placed in this administration by American citizens.”

Greenpeace submitted more than 50 different FOIA requests to various State and Federal agencies starting in May 2010. We continue to receive documents from those requests which are published on Greenpeace’s PolluterWatch on an ongoing basis.

This is the original FOIA request that produced these photographs.