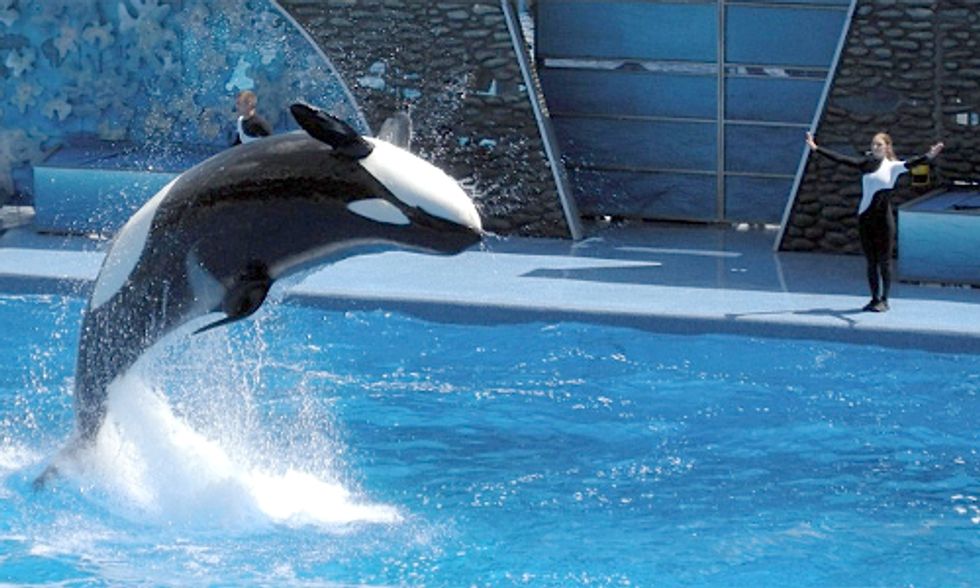 The tide of public opinion appears to be taking a serious turn against marine parks like SeaWorld as concerns about the consequences of keeping whales and dolphins in captivity continue to grow. Now members of Congress have added fuel to the fire with a letter criticizing the U.S. Department of Agriculture (USDA) for failing to address regulatory upgrades for marine mammals in captivity for almost two decades.

“Sound, modern science should inform our regulations on marine mammal captivity,” said Rep. Huffman and Rep. Schiff in a joint statement. “Unfortunately, USDA has refused to act for nearly two decades, endangering humans and orcas alike. It’s unacceptable that our regulations protecting orcas and other marine mammals have not been updated to reflect the latest science. It is past time for USDA to address this issue.”

According to the letter, in 1995 a committee advised the USDA on revisions for marine mammals regulations, but it never came to a consensus for sections about indoor and outdoor facilities, water quality, space requirements and swim-with-the-dolphin programs.

In 2002, the USDA asked the public to weigh in on proposed updates to standards for the care of captive marine mammals and received input from “the animal exhibitor industry, animal welfare groups, scientific community and the public” recommending improvements. Yet, 12 years later it still hasn’t taken any action to update regulations or implement changes.

Animal advocates have been raising concerns about the facilities and conditions whales and dolphins are kept in at marine parks and aquariums for decades, citing complaints that range from insufficient protection from the sun, hazards in the environment and tanks that are too small or don’t meet minimum standards for size.

One well known case is Lolita’s; advocates argue that Lolita is being kept in a tank that’s not just too small for an animal her size, but illegally small under federal guidelines, at the Miami Seaquarium.

In their letter, lawmakers also noted the increase in attention these issues are getting, thanks in part to the documentary Blackfish, which they point out “argues that keeping orcas in captivity and regularly requiring them to perform for the public is cruel and causes enormous physical and psychological pain.”

According to the results of two recent opinion polls, public sentiment is shifting against captivity for public display, particularly for orcas, to reflect what we’ve learned about the dark side of the industry and the harmful effects removing them from their family groups and denying them the opportunity to engage in natural behaviors.

A poll commissioned by the Animal Welfare Institute (AWI) and Whale and Dolphin Conservation (WDC) shows that half of Americans now oppose keeping orcas in captivity, while only 21 percent were in favor. According to AWI, there was a significant increase of 11 percentage points in the number of Americans opposed, as well as a 5 point drop in those expressing support since the last opinion poll was conducted in 2012.

“It is clear from the poll that the arguments supporting the maintenance of orcas in captivity have lost their luster and are increasingly failing to convince the American public of the value of this practice,” Courtney Vail, campaigns manager for WDC, said in a statement. “The poll clearly indicates the public’s ever-growing disaffection with captivity.”

Fortunately, opinions aren’t just changing in the U.S. A similar poll conducted in May on behalf of responsibletravel.com and the Born Free Foundation also showed that the majority of British tourists are crossing seeing whale and dolphin shows off of their vacation to do lists. A whopping 86 percent of people surveyed said “they would not wish to visit a marine park to see whales and dolphins as part of an overseas holiday.”

SeaWorld continues to deny the Blackfish effect and the growing public opposition, but people are protesting, artists are refusing to perform there, its attendance and profits are dropping and major shareholders are getting out.

With lawmakers pushing on one side and the public pushing on the other, long-overdue change is in the air, or really the water, for the captivity industry. Members of Congress are now urging the USDA to take swift action to update humane standards of care for marine mammals to reflect the latest science by bringing the proposed rule back to the public for comment and quickly finalizing it.