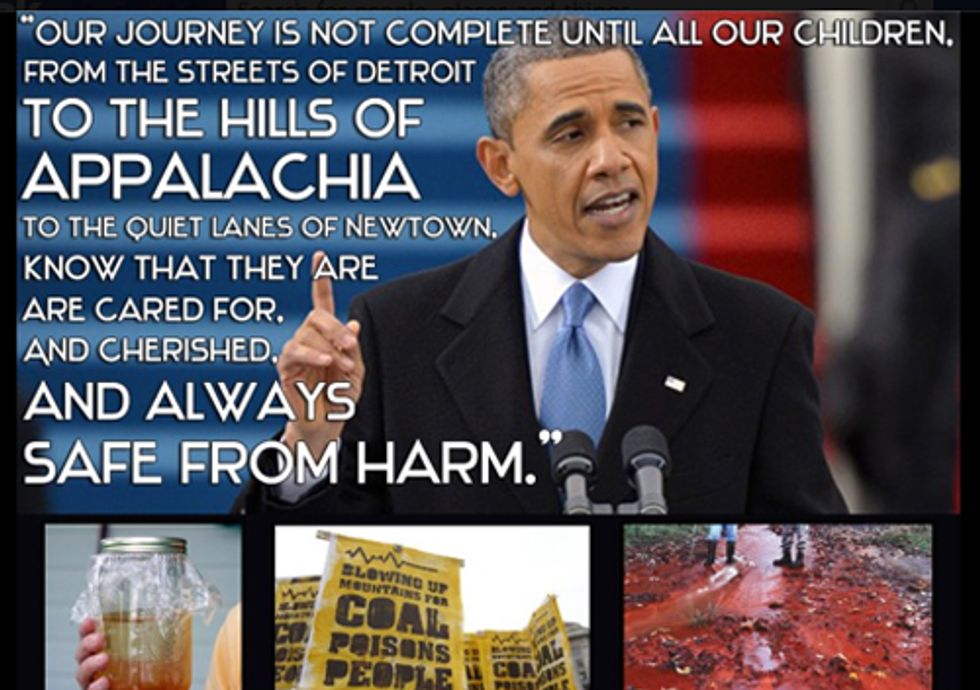 Given its 40-year rap sheet, and 20 peer-reviewed academic studies on the devastating health impacts of mountaintop removal, the job-killing mechanized form of strip mining that only provides 5-7 percent of all U.S. coal production, the ACHE Act simply asks Congress to do what it should have done back in 1971: Place a moratorium on new mountaintop removal mining operations while the first comprehensive federal study of the health dangers is conducted.

Yes, a no-brainer: Especially when Big Coal, like the Patriot Coal Company, now recognizes the health crisis from mountaintop removal and agrees to phase out large-scale operations, and support for the bill comes from big green groups like the Sierra Club and Earthjustice and religious groups like Christians for the Mountains.

Kentucky Rep. Yarmuth kept it simple: "If it can't be proven that mountaintop removal mining is safe, we shouldn't allow it to continue."

If President Obama and the U.S. Congress are committed to keeping the children in the hills of Appalachia—or the coal country on the Navajo Nation, the heartland and West, for that matter—"always safe from harm," as the President noted in his inaugural address last month, they need to wake up and deal with the daily reality of terrifying birth defect rates, cancer risks, chronic cardiovascular diseases and even fly rock on our nation's most vulnerable citizens—kids.

"The U.S. Geological Survey has advised us not to eat the vegetables or fruits from our gardens because toxic fallout from mountaintop removal blasting has contaminated our soil," said Laura Antrim Caskey, founder of Appalachia Watch, Rock Creek, West Virginia. "We need swift passage of the ACHE Act."

"I have fought the impacts of mountaintop removal (MTR) on my home and health for 18 years," added Maria Gunnoe, a West Virginia-based organizer with Ohio Valley Environmental Coalition, and the 2009 North American Goldman Prize recipient. "Now science is showing that it's killing me and my community, and Congress needs to listen. Cancer here is as common as the cold. The fact is this is not about who is winning; it is about who is dying from the violent impacts of mountaintop removal."

Rep. Slaughter, a New Yorker raised in Harlan County, Kentucky and the nation's only microbiologist serving in the US Congress, spelled it out:

"Every American has a right to live and work in a community free from environmental health risks. And it is our duty to ensure that this right is not infringed upon by industries that consider community health and environmental protection to be less important than their profit margins. Given the growing field of evidence that people living near mountaintop removal coal mining sites are at an elevated risk for a range of major health problems, we should place a moratorium on further mountaintop coal removal activity until we can ensure the health and safety of families in these communities."

Appalachia has not cornered the marketing on coal mining misery; industrial strip mining got its birth in my Illinois woods in the 1850s, and after 150 years of non-stop plunder of our farms, forests and communities the heartland is now facing an unabashed coal rush. Last month, Dine (Navajo) residents traveled to Peabody Energy headquarters to remind the nation of a half-century of destruction and corruption on Black Mesa. The largest strip mine in the East is now expanding unfettered by regulations across Indiana. The colossal Powder River Basin in the West is ramping up efforts to export to the Asian markets.

In the 20-odd states beholden to strip mining, Congress would be wise to create a Coalfields Regeneration Fund like Great Britain to jump start clean energy manufacturing and transition coal mining communities into a sustainable economy.

In the meantime, the ACHE Act is the first step in addressing the long-overdue health costs in Appalachia, and hopefully beyond.

"The failure to do so," as President Obama referred to the threat of climate change, "would betray our children and future generations."