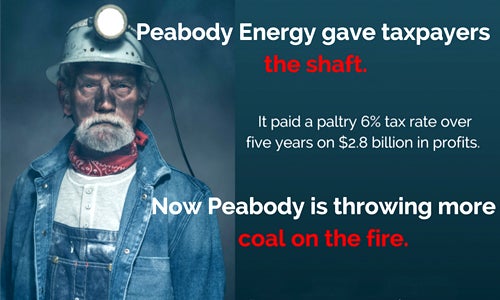 Peabody Coal‘s long-awaited concession that bankruptcy lies ahead signals the curtain fall on the long-running, silent and secret bailout of the management of the U.S. coal industry. As one analyst put it when Peabody announced that it faced a “going concern” letter, “It’s the end of the era of publicly traded coal companies.”

Peabody is about to join Arch, Murray, Alpha and other coal producers in bankruptcy. The total market value of the U.S. coal sector since 2011 has plunged from more than $70 billion to barely $6 billion and most of the remaining value is natural gas operations owned by Consol Inc. Coal stocks have dropped far faster than coal consumption, because the industry, ignoring competition from renewable energy and dismissing pressure to clean up the air, recklessly invested in far greater mining capacity than the market needs. Coal prices dropped by 75 percent.

But even as King Coal inescapably rushes towards bankruptcy, the companies are being showered by regulators and judges with extraordinary largesse. This is not a bailout like GM and Chrysler, (or even the banks), when the taxpayers took very large risks but gained a good shot at rescuing operating enterprises and the value they create. This bailout largesse to coal, largely driven by Republican politicians, is showering down on shareholders and management of enterprises which cannot and will not be rescued, just to postpone the moment at which they are reorganized, thus fattening management and shareholders before the evil moment.

And who pays? The general taxpayer for sure, but more spectacularly sick and retired mine workers and their communities.

I know, Republican politicians, other than Donald Trump, offer as an article of faith that they stand up against bailouts. In fact, the Club of Growth in its first attack on Trump, made a core issue of the idea that Trump has supported the Wall Street Bailout.

Except bailout opposition, it seems, falters when it comes to fossil fuels. Republicans took vicious exception to the Obama Administration’s willingness to use federal loan guarantees to help renewable energy companies – most spectacularly Solyndra—even though these loan guarantees, overall, came in under budget, and cumulatively created a powerful clean energy sector, but still, as you have heard thousands of times, taxpayers lost $535 million dollars when Solyndra failed.

So you would expect an enormous conservative outcry if major multinational corporations exploited loopholes in federal law to stick the taxpayers not with hundreds of millions, but with bills for billions for their business mistakes? Right?

Well, maybe not. Because the nation’s coal mining companies have been doing exactly that, with the active cooperation not of liberal Democrats but of judges and regulators in conservative Republican states like Missouri, Wyoming and West Virginia. Coal companies hold in trust the funds that pay their workers’ pensions and health care. But over the past few years companies like Peabody Coal divided themselves into bits and pieces. Certain bits kept the parts of the coal business Peabody thought were money makers. Other bits (with sexy names like Patriot Coal) got assigned mines that were no longer profitable, along with bundled liabilities like retiree pensions and health care. When Patriot Coal, predictably, filed for bankruptcy it stuck the taxpayers and the workers with the obligations.

In one elegantly vicious move, 208 retired coal miners who had no connection to Patriot Coal, had never worked for it, and whose pensions were fiduciarily sound, saw their retirement siphoned off to pay for legal fees and other bankruptcy costs. In essence, Alcoa, which is not going bankrupt, paid Patriot, which was, to assume pension obligations for these 208 miners. Alcoa gave Patriot reasonable money. But instead of using the funds to pay for pensions, Patriot is using it to pay lawyers, which, in a bankruptcy, it thought it could get away with. Eventually, it had to back down. But 12,000 other mine workers, with more direct relationships with Peabody, face the loss of their hard earned pension and health care benefits.

Coal companies are also required to post bonds to pay for reclaiming strip mined land. But those with creatively puffed up balance sheets were allowed by states to “self bond” and guarantee their own obligations. Arch Coal, for example, was allowed to qualify for “self-bonding” only four months before it went bankrupt. Alpha Resources has obligations of almost a half billion dollars. But over the past three years even “strong” coal companies like Peabody have plummeted towards bankruptcy, making it impossible for them to actually pay their accumulated reclamation costs. Yet state regulator’s took no effective action to make them put up bonds for the reclamation costs everyone knew were coming. More than 75 percent of Wyoming’s massive clean up bill is “self-bonded” by companies most of which no longer exist or will shortly no longer exist.

Now given Republican Congressional rhetoric about President Obama’s “war on coal” and the latest indignation about Hilary Clinton‘s clumsily phrased honesty in recognizing that a lot of coal companies are going out because the market no longer needs the coal they produce, you might think that Democrats had been fierce in cracking down on coal company scofflaws. Alas, until very recently both parties have looked the other way. Obama’s Interior Department continued to award sweetheart coal mining leases of publicly owned coal with no competitive bidding. It permitted coal companies to create shell companies to avoid paying legally obligatory royalties. It allowed the states the play along with the “self-bonding” rip-off. And the Justice Department took no effective action to prevent the coal industry from shifting its pension and health care debts to the taxpayers and workers.

This 24-year-old citizen activist is running for Congress

Finally, in February 2015, the Administration moved, proposing a “Power Plus” plan to help protect miner’s pensions, health care and the economic based on coal dependent communities. (It also moved in the same month to reform royalty abuses).

But, of course, by this time such aid required Congressional appropriations. Bankruptcy courts had already let Patriot and other companies dump their pension and health care obligations. The same Republican leaders who blasted Obama for making war on coal denounced the new plan. Leading the charge? Kentucky Senator and Majority Leader Mitch McConnell, who made it clear that his hostility towards the United Mines Workers trumped whatever concern he might have had for Kentucky coal miners. In December, McConnell personally blocked efforts to include community and pension rescue efforts in the budget deal Republicans cut with Obama.

Here there is a partisan difference. Democrats who are waging “War on Coal” favor keeping the promise America made to coal miners. Hilary Clinton has strongly advocated help for the workers and communities.

How do conservatives justify this stand? By calling any effort to ensure that miners get the pensions they earned yes, “a bailout.” But conservative attacks on such efforts to protect pensions simply don’t mention the shenanigans by which companies like Peabody got rid of their debts. These are actually worse than bailouts. In a bailout the calculation is that a healthy enterprise emerges. But there is no prospect in these cases that Patriot, Arch or Shortly Peabody is going to bounce back.

These are give-aways. What is hard to calculate is how big and costly they are. The UMW Pension fund, for example, protects more than 100,000 coal miners and former miners. It has $3.8 billion in assets, but must pay out about $600 million a year—so if it goes bankrupt, (ignoring the likely collateral damage to the whole U.S. pension insurance system) over a decade $6 billion could be transferred from the coal industry to the public—12 Solydras! How much are the reclamation costs being forgiven? Well, an earlier generation of mining reclamation costs are now estimated to cost $17 billion—34 Solyndras. And the pending defaults on self-bonded mining costs seem likely to run another $2.7 billion. So the total give-aways to coal companies as they race towards bankruptcy seems to be over $25 billion—almost 50 Solyndras. That’s quite a bailout—the GM bailout cost taxpayers only $11.2 billion, less than half as much and the taxpayers got a healthy GM out of the deal—we get nothing from coal give-aways.

So the next time some economist earnestly lectures you on the need to avoid subsidizing clean energy, or a Republican says government shouldn’t pick winners and losers, ask them to show you where—and how loudly—they denounced the Big Coal Bailout of 2016.