The Antidote to Farmer Suicide in Southern India 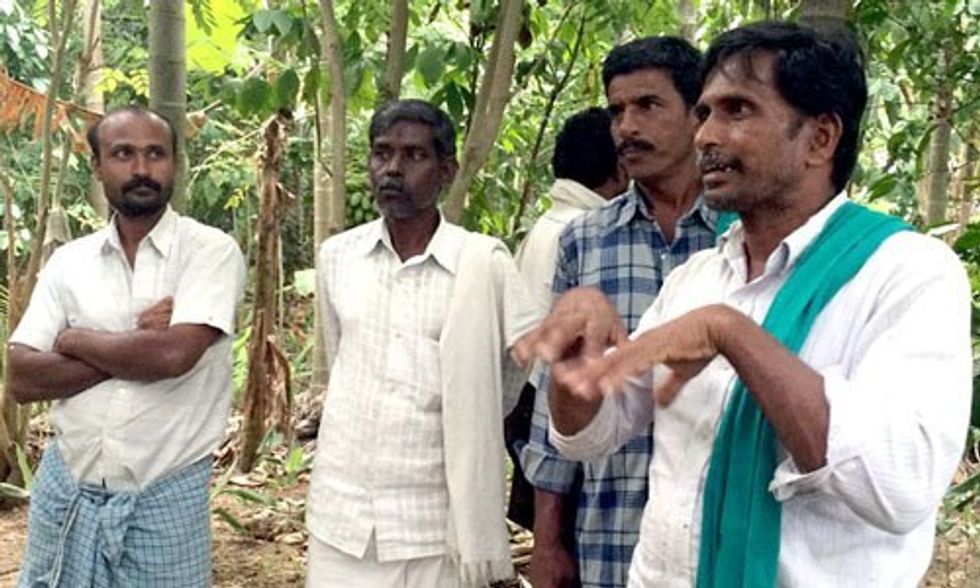 It is late-July. A car drops us off at the edge of a patchwork of agricultural fields on the outskirts of Mysore in a village called Bannur in the South Indian State of Karnataka. Despite the oppressive heat, the women clad in colorful saris, and the sacred cows—more plentiful than potholes—artfully dodged by cars and motorbikes every 20 yards or so along the road, I am reminded of the Midwest.

No matter that there is no corn or soybean in sight and that parcels measure 5 acres instead of 400. It's the neatly defined fields in perfect rectangles that resemble what you see when you fly over Iowa. The field adjacent to the road where the car left us boasts a weed-free plantation of banana trees, the one next to it is lined with straight rows of sugar cane and the one just across the walking path that traverses the fields is recently sown with rice.

We walk a good half mile to the farm we're meant to visit. Leading the way are seven men on motor bikes ranging in age from 30 to 60, wearing flip flops and fabric the size of table cloths wrapped around their waists in typical farmer garb, at least two of them are boasting bright green scarves thrown over their shoulders, symbolic of the social movement they're connected to that promotes “natural farming."

We're headed to Krishnappa's farm, a member of this green-scarf social movement referred to as KRRS, or the Karnataka Rayja Raitha Sangha. Founded in 1980, this peasant farmers' movement is rooted in Gandhi's philosophy of swadeshi, or home economy, meaning that political and economic power can only be just when it is governed by democratic assemblies organized at the village level. KRRS believes that by relying on a localized economy (local production and consumption) for village needs, everyone has the opportunity and the resources to work and create a dignified life.

As we approach the edge of Krishnappa's 5-acre farm, the outward appearance is strikingly distinct from his neighbors' parcels. It seems to be overgrown by weeds and unruly plants of varying heights defending their access to sun and water. The parcel looks like an island of chaos floating next to the neat rows of plantings all around us, waiting stoically and well-behaved on scorched earth for the rains to come. But nothing could be farther from the truth. Within minutes of stepping onto Krishnappa's land, we become privy to an intricately designed coupling of various food-producing plants and intercroppings that bloom into a veritable food forest—the healthiest and most productive land we've seen in India during our short sojourn.

Krishnappa, the proverbial “poster child" of Zero-Budget Natural Farming (ZBNF), has been growing food according to this straightforward yet scientifically-based method for 15 years. KRRS credits Zero-Budget Natural Farming from saving Krishnappa from the fate of so many other farmers that were featured on the front page of the The India Times almost daily during the time we were in Karnataka. These farmers had tragically succumbed to suicide in the face of unrelenting debt. Farmers in India have been forced to take on high-interest rate loans to purchase seeds and chemical inputs from banks that are profiting from agribusinesses' strategy of dictating the methods necessary to produce cash crops such as rice and sugar cane. Like the more than 3,000 farmers in India who have committed suicide in the past three years (50 suicides in 15 days in July of this year in the state of Karnataka alone) Krishnappa was feeling trapped and impotent, a victim to the whims of the loan sharks and unpredictable markets that either paid nothing or too little to make a dent in debt mounting season after season, let alone feed his family.

It was about this time that Krishnappa learned of a workshop to teach farmers an alternative to the chemical-based mono-cropping techniques, a central feature of the Green Revolution that has led to a decline in the total number of small landholders, an increase in the costs associated with farming, and a decrease in the amount of land used to grow food for local consumption in favor of cash crops. The Green Revolution has proven to be a false panacea, whose promise of a reduction of hunger and poverty was short lived. What piqued Krishnappa's interest the most in this workshop was the term “zero-input." Was it possible to recover the health and productivity of his small but adequate parcel without investing in inputs that required cash or loans? The workshop was sponsored by KRRS and was an introduction to Zero-Budget Natural Farming (ZBNF), given by the pioneer of this methodology, Subhash Palekar. The two main features of ZBNF are:

According to Krishnappa, there were more than 1,000 farmers at the start of this week-long intensive workshop he attended some 15 years ago. By the end of the week, there were only 13 farmers left standing and only one of those farmers was willing to take the risk of implementing ZBNF. That was Krishnappa, who now hosts regular learning exchanges on his land as word has spread through radio, newspaper and word-of-mouth about his ability to produce a multiplicity of food crops in soil that is dark and rich with microbes, requires zero cash investments and needs virtually no outside labor.

Krishnappa shares with local farmers that he believes Zero Budget Natural Farming is the antidote to the epidemic of farmer suicides in India. Photo credit: WhyHunger

The five farmers that accompanied us on the farm tour that day, in addition to Krishnappa and a fellow ZBNF farmer, were—like us—walking his farm for the first time, too. They were fellow farmers who told us they were looking for a way out of the debts they were facing, the chemicals they and their family members were routinely exposed to, the depletion of the soils on their land and for a life that afforded them the dignity to feed their families.

There are currently close to 1,000 farmers growing with the ZBNF method in Karnataka and 100 in Krishnappa's district alone. It was easy to see why Krishnappa has become a walking-talking advertisement for Zero-Budget Natural Farming. If anyone could sell the virtues of meticulously collecting and culturing cow dung and urine into liquid gold that incites the Earth to fulfill its promise of a healthy bounty, it would be the charming and loquacious farmer we encountered that day who kept us on his farm scribbling furiously in our notebooks for hours until the sun set on the patchwork of fields around us.

“Food and income in three months, Sir!" became Krishnappa's enthusiastic mantra throughout the day. Without the proof of the bounty of fruits, vegetables and fibers we witnessed as we walked the entire length of his 5-acre farm, it would be easy to confuse him for a snake oil salesman. I don't even own one acre of land in the U.S., let alone India, and I was ready to acquire my own local breed of cow and start cultivating. I was ready to sign on the dotted line and become a ZBNF disciple that very afternoon!

The longer we walked and talked; the more times we knelt to touch, small and even taste the soil; the more birds and butterflies we encountered; the more we scanned the land from the soil to the sky—from the microbes to the earthworm to the tubers, to the beans, to the sugar cane, to the limes and finally to the coconuts ripening in the top of the trees—the less “plug-and-play" this ZBNF method became.

Productivity isn't just dependent on the jeevemrutha, it turns out. The farmer's approach to caring for the land and his or her capacity to learn is equally critical to success. And, according to Krishnappa, learning means gathering knowledge through failures and then sharing those lessons. It is important to assume ignorance in the face of the natural world, he said, so as to be able to ultimately comprehend and trust in scientific principles that dictate the designs of nature.

“It's only the farmers that are using chemical inputs that are committing suicide," Krishnappa reminds us. He proclaims on more than one occasion that all a farmer in Karnataka needs is a local breed of cow and some seeds saved by and gifted from another farmer to get started in ZBNF. He believes ZBNF is the antidote to the epidemic of farmer suicides in India. And what's more: “Farmer-to-farmer interaction and shared learning is the only way to grow the number of farmers practicing ZBNF." He went on to profess: “All the scientific knowledge I have now, I have learned through practice. I am an uneducated farmer. I didn't go to school. For me, failure is an important method of learning."

As darkness crept over the fields and we wended our way back to the road where our car was parked, the visiting farmers now climbing astride their motorbikes seemingly satisfied and sufficiently inspired by having come to see for themselves the unfathomable—that one could heal the land and grow food in abundance without incurring debt—Krishnappa, this farmer-cum-philosopher invoked us to recall something he said early on in the afternoon: “There are two kinds of truth: One that is unknowable and one that is proven through practice. Sir, food and income in three months!"