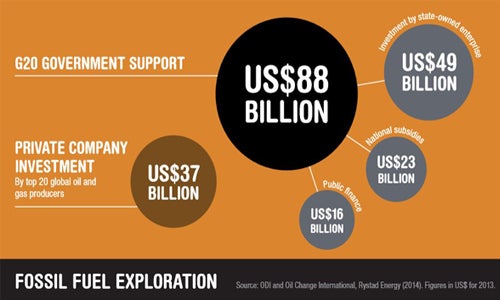 In the debate over climate change and the transition to a clean energy economy, there remains an elephant in the room.

Many developed nations talk about ending our addiction on fossil fuels, about the need for radical cuts in carbon dioxide in order to avoid catastrophic climate change and yet, at the same time, they continue to subsidize the exploration of fossil fuels. 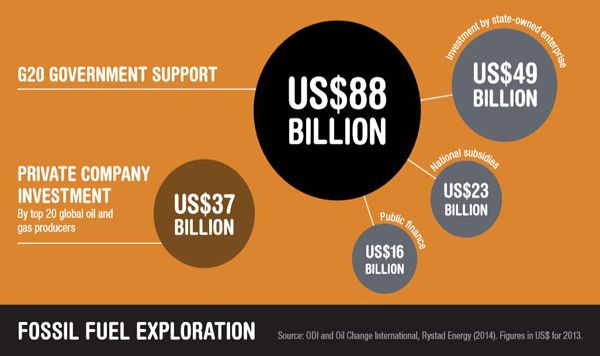 Despite repeated pledges to end subsidizing fossil fuels, governments are still spending billions doing so. Five years ago, the G20 pledged to the phase out of ‘inefficient’ fossil fuel subsidies and re-iterated the call last year in Saint Petersburg in 2013.

Yet a new report by the Overseas Development Institute and Oil Change International, published on the eve of this year’s G20 Leaders’ Summit, on Nov. 15 -16 in Australia, has found that governments are still spending a whopping $88 billion every year supporting fossil fuel exploration.

The madness of the situation is that the governments know that the majority of the oil and gas that is discovered needs to be kept in the ground if we are to avoid dangerous runaway climate change.

Indeed, the report argues that, by providing subsidies for fossil-fuel exploration, the G20 countries are creating a “triple-lose” scenario: They are directing large volumes of finance into high-carbon assets that cannot be exploited without catastrophic climate effects; whilst diverting investment from economic low-carbon alternatives such as solar, wind and hydro-power.

And finally they are undermining the prospects for an ambitious climate deal in 2015.

It shows that with rising costs for hard-to-reach reserves, and falling coal and oil prices, generous public subsidies are propping up fossil fuel exploration which would otherwise be deemed uneconomic.

The worst villain is, not surprisingly, the U.S. which splashed out $5.1 billion annually in subsidies for fossil fuel exploration in 2013—ironically almost double the level in 2009 when the G20 pledged to phase out fossil fuel subsidies. Although President Obama has proposed to cut subsidies, the oil-washed Congress has failed to pass any subsidy cuts.

Next up is Australia, which is providing $3.5 billion a year for the development of fossil fuel resources both onshore and offshore. President Putin’s Russia provides $2.4 billion in subsidies annually, including in the Arctic, the first region we should be disinvesting from and where the ravages of climate change are already being felt.

Not to be outdone, and trying to prop up its ailing North Sea reserves, the United Kingdom gives more than $1.2 billion in subsidies. Many of the companies receiving tax breaks are international companies such as Total, Statoil, Centrica and Chevron.

Perversely you end up with a “merry-go-round” of countries supporting each others’ companies. The US subsidizes exploration in Columbia, Nigeria and Russia, while Russia is subsidizing exploration in Venezuela and China, which in turn supports companies exploring Canada, Brazil and Mexico.

The report also highlights US$521 million in public finance is being channelled into fossil fuel exploration by the G20 through multilateral development banks, of which the World Bank Group is responsible for two-thirds.

Oil Change International’s Director Stephen Kretzmann says of the new research, “Five years ago, G20 governments pledged to both phase out fossil fuel subsidies and take action to limit climate change. Immediately ending exploration subsidies is the clearest next step on both fronts.”