Why Thanksgiving Is the Perfect Time to Give Up Meat 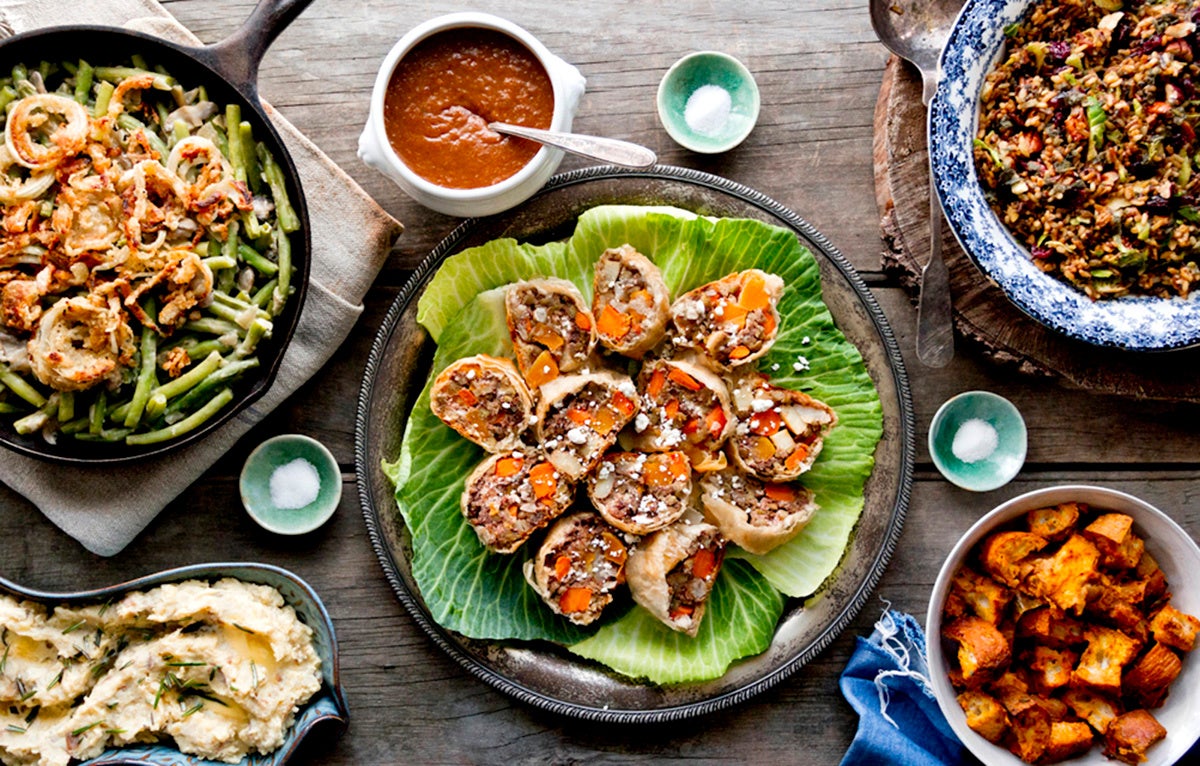 Of all our holidays, Thanksgiving is my favorite. It’s a time out from the frenetic pace of life, a time for families to slow down and gather in the kitchen—to just be. It doesn’t lend itself to the garish onslaught of commercialization. (You can sense the capitalist frustration and over-compensation in that oddest of add-ons, Black Friday). And for me, Thanksgiving was the perfect time to finally give up meat.

My journey to vegetarianism has been one of gradual awareness. In college, while living off campus, I discovered the wonders of cooking Indian food. Because the one cookbook I owned was from the Vaishnava tradition, my Indian cookery was strictly vegetarian. At a formative period of my life, I fell in love with the flavors of India. Those dishes never wanted for meat.

A few years after college, my wife, Sharon, and I began practicing vipassana meditation. On our first 10-day silent retreat—hard, mind-blowing work—we took comfort from the simple and delicious vegetarian meals provided by the meditation center. The code of conduct in the vipassana tradition is geared toward not harming other beings. This means no meat. Over the years, Sharon experimented with vegetarianism a few times, but it’s hard to be vegetarian when married to a meat eater.

At some subconscious level, I realized my actions weren’t consistent with my principles. But I grew up a meat eater in a meat-loving society. It’s not easy to step out of lifelong norms, but it’s very easy to rationalize. For nearly a decade I told myself, “I’ll become vegetarian someday.”

That’s where Thanksgiving comes in.

The day after Thanksgiving in 2011, I was in line for lunch at my favorite Mexican food truck at Caltech. While hungry, I also felt heavy from all the turkey the night before. So instead of my usual carnitas burrito, I ordered the veggie. It was superb. As I ate, I had a thought: Why “someday”? Why not today?

And so I went for it: I decided to try vegetarianism for a month, until Christmas Eve. Not one totake a hard line, I ate meat a couple of times during the trial period. Afterward, I’d feel heavy and slow. I began to experience that a vegetarian diet gave me more energy. I also experienced that food in general tastes better. So after Christmas I just kept going.

I wondered which I’d miss more, bacon or sushi? It turns out I miss neither.

Vegetarianism, of course, is also easier on the planet—and climate. Roughly 15 percent of global greenhouse gas emissions come from animal farming. In 2010, I made simple estimates of my own emissions, which yielded two huge surprises. First, the vast majority of my emissions came from flying. And my second largest source of emissions, by far, was from food. By becoming vegetarian, I cut my food emissions in half.

While moving the 7.5 billion people on this overcrowded, overheating planet toward plant-based diets is no silver bullet solution, it’s certainly an important part of climate mitigation.

There’s a spiritual aspect, as well. I’ve benefited greatly from a more conscious, intentional relationship with food. I’ve come to realize that gratitude is a necessary condition for happiness, and I know of no better way to cultivate gratitude than through food, whether it be plant or animal. Food is gift.

This, perhaps, is what makes Thanksgiving such a good time to experiment with a conscious shift in diet. Gratitude for food is baked into the holiday’s very name. It’s a time to reflect on our relationship to food—which is to say, our relationship to the biosphere—which we perhaps don’t do often enough.

Peter Kalmus is a climate scientist at NASA’s Jet Propulsion Laboratory (speaking on his own behalf). He lives in suburban Los Angeles on one-tenth the fossil fuel of the average American. His book is Being the Change: Live Well and Spark a Climate Revolution. Twitter: @ClimateHuman.