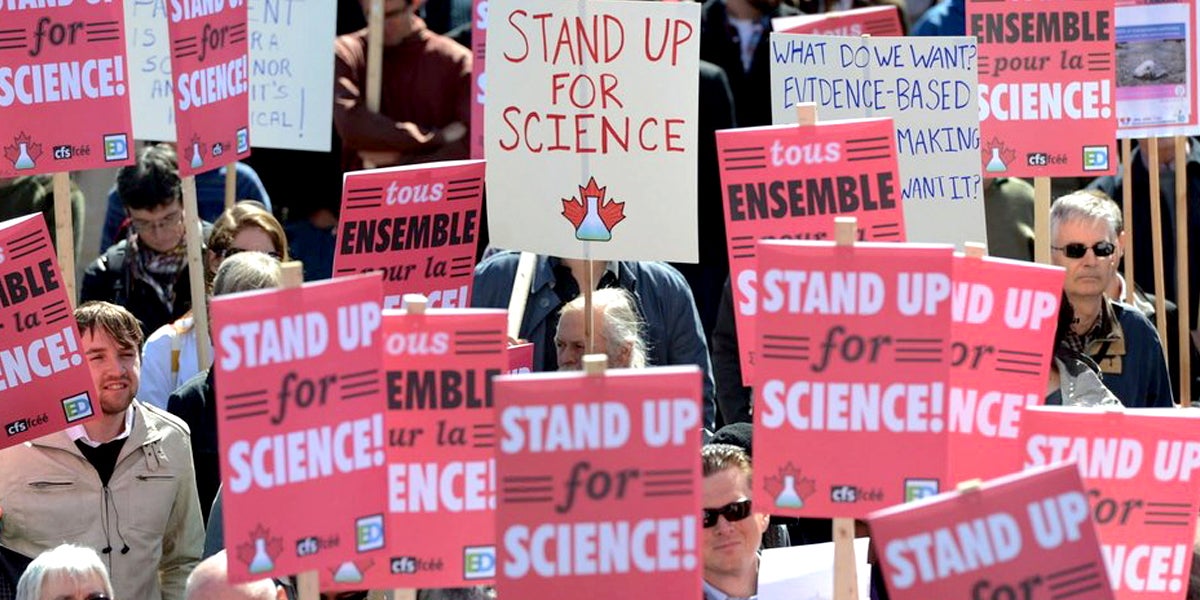 President Trump signed an executive order Monday mandating that for any new rule issued from an agency, two would have to be revoked. Such a proposal is absurd, illogical and threatening to our public health and safety.

Last week, the Trump Administration also issued a government-wide hiring freeze, instituted a far-reaching gag-order and stopped the normal flow of grants and contracts issuance at federal agencies. All of these actions were major hindrances to government employees’ ability to do their jobs.

But actions like these affect us all. When it comes to science-based agencies and the scientists that work there, it is worth reminding ourselves of the crucial role they play in in our daily lives.

Here are six reasons you should thank a government scientist today:

1. Did You Check the Weather Forecast Today?

Did you thereby know how cold it was? Or if it would rain? Or whether there were hurricane force winds outside? You can thank a meteorologist at the National Oceanic and Atmospheric Administration (NOAA).

Scientists at NOAA’s National Weather Service work across the country and around the clock to monitor weather conditions and warn you about life-threatening severe weather events, protecting life and property. And how do they get their information?

It is NOAA and its supercomputers that run complex atmospheric models to predict future weather at all points on the globe and it is NOAA that makes the model results publicly available. It is NOAA and the National Aeronautics and Space Administration (NASA) that work together to launch weather satellites that provide real-time information on weather patterns day and night and again, this information is publicly available.

Where do you think your weather app gets its information? It is this freely available data from the government that allows your app, that TV station and any private forecasting company to produce weather forecasts. Did you think you think your app was running atmospheric models? There’s not an app for that.

2. Did You Eat Something Today? Did You Avoid Food Poisoning?

You can thank a food scientist at the U.S. Department of Agriculture (USDA). Scientists at the USDA inspect meat, poultry and eggs at plants around the country. Scientists at the Food and Drug Administration (FDA) do the same for our fruits and vegetables and dairy products.

These scientists work to make sure the American public doesn’t get sick from contaminants in food. And when food-borne illness does happen, they work quickly to find the source and stop its spread. Remember that time you had to read Upton Sinclair’s The Jungle and learn about the horrible conditions inside industrial agricultural operations at the start of the 20th century? Luckily we don’t have this kind of nightmare of a food system anymore because scientists at the USDA and FDA maintain standards that keep us safe from food-borne illnesses.

3. Did You Take Any Medications Today? Did They Work? And Did They Not Kill You?

You can thank a doctor at the U.S. Food and Drug Administration. Scientists at the FDA carefully review new drug applications from pharmaceutical companies and use all available scientific information to determine if the drugs are both safe and effective. Only if drugs are proven to be both by FDA experts and their scientific advisory panels do they reach the market.

Remember when some governments thought giving pregnant women Thalidomide was a good idea? It wasn’t. And thankfully the U.S. FDA didn’t approve thalidomide for use in the U.S., preventing countless babies from being born with debilitating birth defects. Thanks, FDA scientists!

4. Did You Use Any Products Today?

You know, everyday items like a hair dryer, a couch, a door, a swivel chair, a TV, a bicycle, a jacket, a coffee mug. Were you able to use such products without them catching on fire, choking you, cutting you or otherwise harming you?

You can thank a scientist at the Consumer Product Safety Commission (CPSCI)! Scientists at the CPSC study product safety. They make sure that products can be used safely and don’t create unintended dangers, especially for babies and children who can more easily choke, be strangled or be crushed by products meant for adults.

When CPSC scientists notice major problems associated with products, they can issue recalls and rules to prevent products from harming more people. You might not often think about the potential for your desk lamp to burst into flames or for your coffee mug to lacerate you (both of these recalls were issued this month!), but that’s exactly the point. CPSC scientists are working to keeping the products in our homes safe for us and our families before they cause widespread harm.

5. Did You Go Outside Today? Were You Able to Breathe Easily?

You can thank a scientist at the U.S. Environmental Protection Agency (EPA). Scientists at the EPA study air pollution, its sources and its impacts on human health and the environment. They look at the vast amount of scientific literature to determine what air pollutant standards are protective of the public, especially vulnerable populations, like the young, the old and those with respiratory diseases.

Remember that time the air pollution was so bad that you hacked up a lung and couldn’t see your neighbors house? Me neither. That’s because the U.S. has science-based air quality standards that have been phenomenally effective.

This country has enjoyed decreasing air pollution levels and thereby death and sickness, for the last half century. Do you think that energy companies have decreased their stack emissions and car companies have decreased tailpipe emissions out of the goodness of their heart? Of course not. It is the EPA’s strong air pollution standards that have led us to develop technologies like the catalytic converter and power plant scrubbers that save us money and energy and also cut pollution emissions. It is all thanks to the EPA and its scientists.

6. Did You Spend Your Day Not Thinking About the Potential for a Global Pandemic and How You Might Avoid Catching It?

You can thank an epidemiologist at the Centers for Disease Control and Prevention (CDC). Scientists at the CDC closely monitor the spread of infectious disease around the world. They know that we need to stay a step ahead of any virus or bacteria that stands to take down or at least weaken the human population. They study diseases in the lab so we will know how to react, they track mutations to existing infectious diseases and they maintain facilities and infrastructure that work to produce vaccines from emerging threats.

Do you think it’s annoying that you have to get a flu shot every year? Do you know what would be more annoying? Any global pandemic. And it wouldn’t even have to be at the scale of the monkey in the movie Outbreak or the fever in Contagion to cause widespread panic and inconvenience. Remember how much we freaked out about SARS, Bird Flu and Swine Flu. Nature can do much worse. Thankfully, CDC scientists are ready and watching to react to the next global threat.

When we talk about cutting back on “regulations,” these are the kind of public protections we’d lose. President Trump’s 2-for-1 regulations proposal would force government scientific experts to choose between which public health and safety threat to prevent and which to allow to cause harm.

I want to be clear: Thank you, government scientists!

P.S. This is not an exhaustive list. Do you know other federal scientists who are working to keep us safe and healthy every day? Let me know in the comments!

Gretchen Goldman is a lead analyst in the Center for Science and Democracy at the Union of Concerned Scientists.