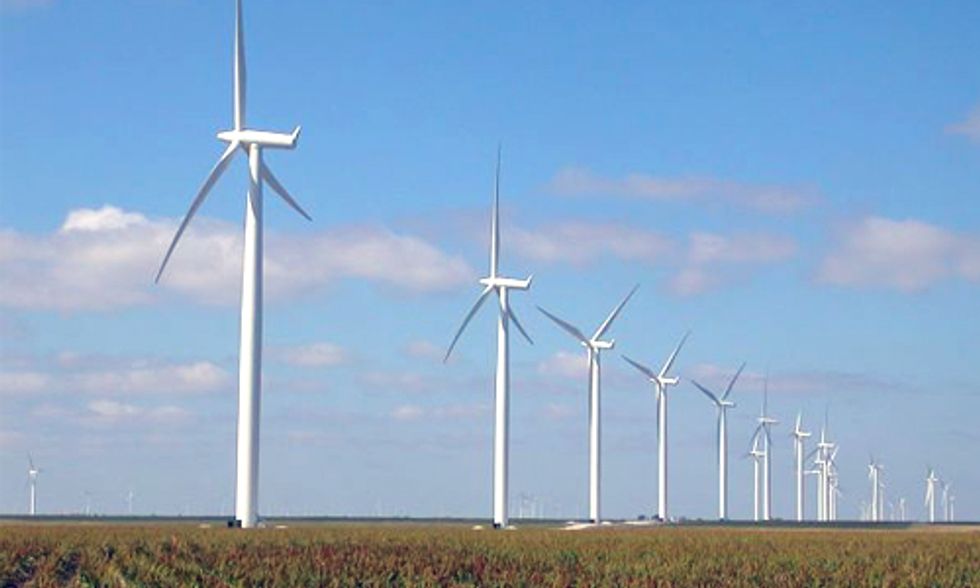 When you think of "energy" and "Texas," you probably think "oil." But those wide-open spaces sitting on those lucrative oil fields also make it a prime location for another form of energy generation: wind.

The Roscoe Wind Farm in Texas has an operational capacity of 781 megawatts. The wind farm started operations in 2009 and has 627 turbines installed.

Texas' own top power source by far is gas (50 percent), followed by coal (32 percent) and nuclear (9 percent). But it is also the nation's leading producer of wind energy—and growing. While the state is home to the 3rd and 5th dirtiest power plants in the U.S., it also produces nearly a quarter of the country's total wind power. It has created the second largest number of green jobs after California. Currently, wind is the power source for 3.3 million Texas homes, driven by private investment, a deregulated and competitive electricity market, federal incentives and Texas' own clean energy goals to reach 10 GW of renewable energy generation by 2025, according to research done by the Pew Charitable Trusts, released at a webinar today.

“Pew’s research demonstrates that a reliable electricity grid requires both a diversified mix of affordable generation sources such as wind and government policy to foster deployment,” said Jeff Clark, executive director of the Wind Coalition. “Texas consumers are benefiting because the state has capitalized on the federal production tax credit to build its wind industry, which provides more than 177,000 jobs.”

“Texas illustrates how state and federal policy can complement one another to spur deployment of clean energy and attract private investment," said Tom Swanson, manager of Pew's clean energy initiative. "The outcomes include job creation across the state, energy and cost savings for businesses, and reliable, affordable energy for residential customers.”

According to the Pew report, Texas is also the leader in industrial energy efficiency technologies which produced heat and power from a single source or capture wasted heat to generate electricity. "These technologies can help manufacturers reduce energy consumption, costs, and water use—all of which are critical in Texas given the state’s high electricity prices and chronic droughts," said the Pew report.

Texas is leading the nation in installed wind capacity and is coming up rapidly in solar generation as well. Image credit: Pew Charitable Trusts

"Texas has emerged as a clean energy leader, with its unparalleled wind and solar resources and a large manufacturing industry ideal for exploiting industrial energy efficiency," Pew asserted. "With further policy support, the state can continue to tap into this potential and use it for economic growth."

But further policy support is the big question mark. While Texas surpassed its renewable energy goal for 2025 in 2010, there are signs of possible retrenchment.

According to an interactive tool released last week by Earthworks, "A bill is pending that would eliminate the renewable portfolio standard and strip the Public Utilities Commission of its authority to regulate trading of renewable energy credits." That's part of a coordinated nationwide push by heavily fossil fuel-funded groups like the Heartland Institute, Americans for Prosperity and the American Legislative Exchange Council (ALEC). Similar legislation has been introduced in about two dozen states with only one scalp so far: Ohio froze its clean energy standards in July and its legislature is currently considering repealing them entirely.