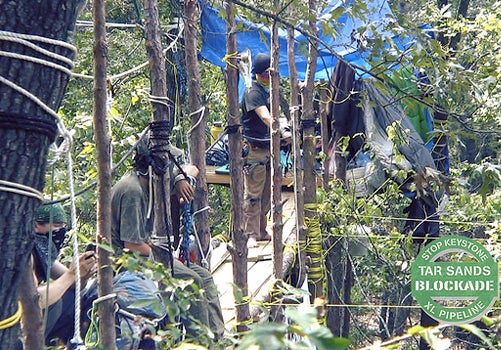 In a remote corner of northeast Texas, there are people living in trees because, they say, they’re trying to protect the planet from increased carbon emissions over the next century to help slow climate change. Challenging this treehouse blockade (see video below) is the advancing Keystone XL pipeline whose owners, the Canadian power company TransCanada, say they’re trying to save the oil industry from worsening economic conditions over the next decade.

TransCanada started building the Texas section of the XL pipeline in early August. Since then, efforts to slow construction by a coalition of landowners, environmentalists and others, calling themselves the Tar Sands Blockade, have gone from protest demonstrations and lawsuits to non-violent civil disobedience actions including an elaborate blockade of treehouses on Sept. 24 in the path of pipeline construction in Winnsboro, Texas.

Because the pipeline is intended to bring toxic tar sands crude oil, heated and under pressure, from the tar sands of Alberta, Canada to the Texas refineries of the Gulf Coast for export to foreign markets, resistance along the route through the American heartland has grown more intense over the years. And the company and the state have responded with violence, jailing, extreme bail amounts and over-charging on arrest.

“Game Over for the Climate?” “If Canada proceeds, and we do nothing, it will be game over for the climate,” wrote James Hansen, director of the NASA Goddard Institute for Space Studies, last May in the New York Times. Hansen has been calling for measures to ward off or at least mitigate the effects of climate change since he first testified about the dangers before Congress in 1988.

He concluded his piece in the Times saying: “The science of the situation is clear—it’s time for the politics to follow. This is a plan that can unify conservatives and liberals, environmentalists and business. Every major national science academy in the world has reported that global warming is real, caused mostly by humans, and requires urgent action. The cost of acting goes far higher the longer we wait—we can’t wait any longer to avoid the worst and be judged immoral by coming generations.”

Tar sands oil is toxic from the moment it leaves the ground, leaving a devastated environment behind, wasting water in processing, destroying forests, threatening vast water tables with pipeline failures, spreading carcinogens, and finally doing far more damage than regular oil to the atmosphere and the global climate.

The oil industry, having announced plans to invest $379 billion in tar sands development, argues that it’s all benign.

Does It Take a Movie Star to Get Attention? 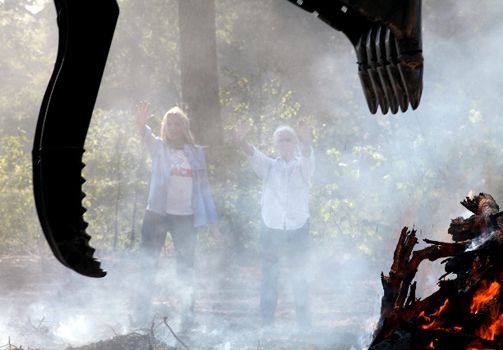 As the Tar Sands Blockade tree village enters its third week, mainstream media have ignored it almost entirely outside the region. Even on the internet there is limited coverage, with such exceptions as firedoglake.com and several environmental websites.

CBS News, USA Today and People showed some interest in the story when Darryl Hannah was arrested on Oct. 4, but CBS did no original coverage, only running an Associated Press story. All three reports ran Hannah’s unattractive mugshot, but none of them mentioned the treehouse blockade or the protestors’ underlying motivation, the dangers of tar sands oil.

Hannah was arrested for criminal trespass and resisting arrest for standing passively in front of TransCanada construction equipment, holding up her hands for it to stop. Hannah said a TransCanada private security guard hurt her wrist. Arrested with her was 78 year old great-grandmother Eleanor Fairchild. Fairchild, who also stood passively with her hands up, was charged with criminal trespass even though she was on her own land.

TransCanada had taken an easement across her land by eminent domain, so in the eyes of Texas law, that part of her land was no longer hers.

TansCanada’s use of eminent domain is under court challenge, but construction continues. The challenge is based in part on the facts that the law intends for eminent domain takings to be for the public good, whereas TransCanada is a multi-billion dollar, private, foreign corporation.

TransCanada also a faces a court challenge to its permits from the U.S. Army Corps of Engineers for this leg of the pipeline. A Sierra Club suit argues at length that TransCanada did not comply with the terms of federal environmental law, in part by failing to file a proper environmental impact statement. A federal judge denied the Sierra Club’s request for an injunction, and the construction continues.

In Winnboro, TransCanada has now encircled the treehouse blockade and shines floodlights at the protestors all night. Police and private security have been taking cameras away from people on the ground. When an important story is happening out of sight of the media, it’s hard for it to make an impression.