Texas Oil Spill Expected to ‘Get Much Worse’ for Wildlife 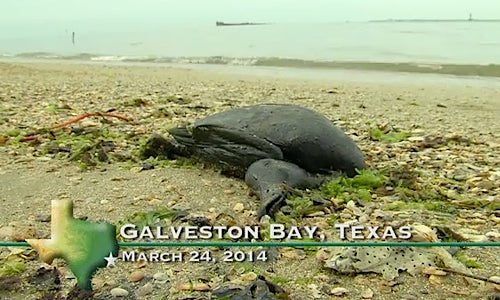 The oil spill off the coast of Galveston, TX, has the potential to get a lot worse than previously expected. The 168,000 gallons of thick, sludgy fuel oil that escaped a barge—whose hull was breached after a collision with another ship—is proving extremely difficult to contain. As of yesterday morning, oil was reported as far as 12 miles from the site of the collision.

From the start, wildlife experts have said this spill could not have been in a more sensitive spot in Galveston Bay. The area, particularly a Globally Important Bird Area called the Bolivar Flats, hosts huge numbers of migrating birds from a wide variety of species. The collision occurred in the Houston Shipping Channel. It has bird nesting and roosting sites on both of its banks.

“We expect this to get much worse,” Jessica Jubin, a spokeswoman for the Houston Audubon Society, told the Houston Chronicle. Houston Audubon is the manager of the Bolivar Flats preserve. Experts are concerned the true toll of the spill will be known over a period of years, not days. 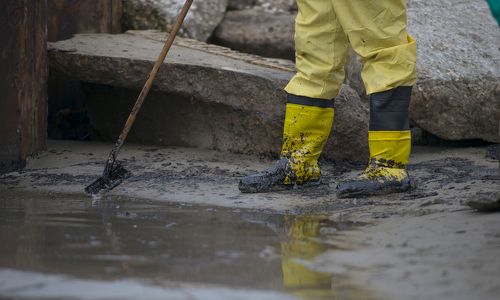 It’s not just the location of the spill that has scientists worried. The spill is occurring at a really bad time. Tens of thousands of wintering birds are collecting in Galveston Bay, especially Bolivar Flats. Clean-up crews are in a race against time to keep the oil from reaching the shoreline and to keep birds out of harm’s way.

Many shorebirds dive to catch fish to eat, during which they pass through potentially-oil-clogged water. And shorebirds are not the only species of concern. Birds that fish in open water, including pelicans, loons, grebes and many species of terns, ducks and gulls are at especially high risk. Although oil has begun to was ashore, it still seems to be concentrated in open water.

If the spill is not contained—and as mentioned previously, there are signs it is traveling far—waterbirds that utilize marshland will be at risk. These include herons, ibises, spoonbills and egrets.

As with many coastal marshlands, sea level rise has caused marshes around Galveston to recede in recent years. Marshes are essential habitat for a host of plant and animal species. They are also vital for a wide range of ecosystem functions, from filtering water and providing nursery grounds for sea life to storing carbon and protecting inland areas from storm surges.

Embattled by sea level rise, erosion, development and the incursion of saltwater, Galveston’s marshes are far less resilient than they once were. An oil spill of this magnitude will wreak terrible damage if it gets to them.

By Monday night, officials expressed concern that changing currents and winds were pushing oil out into the Gulf of Mexico, as well as onto Galveston Island. Indeed, already about half the oil has escaped into the Gulf, aided and abetted by the bad weather and heavy currents. As the oil spreads, the oil recovery effort expands in geographical scope.

Forecasts for today show heavy winds (up to 40 mph) and currents continuing to move swiftly out toward the Gulf. Seas are expected to reach six to eight feet near the Texas coasts, further baffling the 70,000 feet of booms set up to block the oil from the shoreline. The effectiveness of booms so far has been mixed at best. 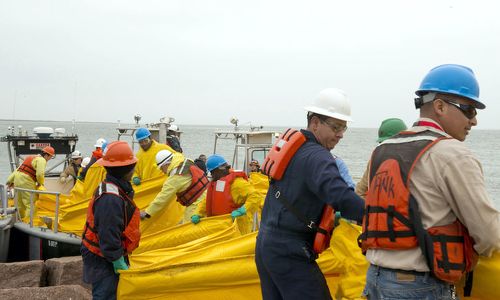 Crews have set 70,000 feet of boom, which is proving only partly effective at protecting shorelines. Photo credit: Greenpeace

Coast Guard Capt. Brian Penoyer, who is captain of the port, agreed that the weather did not favor oil spill recovery at this time of year, confirming that the weather had broken the oil slick into patches. “The weather doesn’t favor us this time of year,” he said. As it continues to be exposed to the elements, the viscous fuel oil—which is known as IFO 380—may become denser than water, making it even harder for skimmers and detectors recover it.

Debbie Patton, of the National Oceanic and Atmospheric Administration, reinforced concern for birds and other animals who spend their time at the water’s surface, agreeing that the type of oil was a concern, “It’s heavy and sticky and stays on the surface. That’s a bad thing if you’re a bird or any species that comes up through the surfaces like dolphins or turtles.”

This is all bad in and of itself. But the sting is only made worse by the fact that the tugboat that was towing the barge has been reported to the Coast Guard for twenty incidents in the past twelve years, including prior accidents. The tugboat, known as Miss Susan, was towing both the barge that crashed and another barge, and it was doing so in dense fog.

According to the Houston Chronicle, the barges and the Miss Susan are owned by a Houston-based company called Kirby Inland Marine. The Chronicle also reports that government records show Kirby operates a huge fleet of barges and “is heavily involved in oil transport nationwide.” 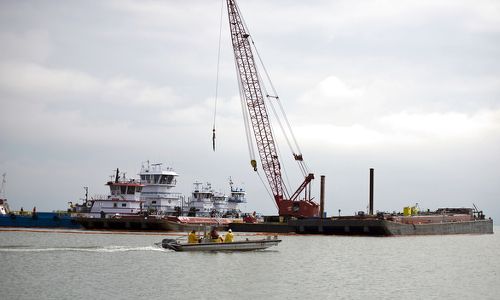 It Just Goes to Show

The Galveston spill happened right as we at Greenpeace USA were setting up our coverage of the 25th anniversary of the Exxon Valdez spill. We posted a piece by Rick Steiner, who has been campaigning against oil spills and oil transport for decades. We know that the spill in Galveston is its own tragedy, one that doesn’t need to be held up to any other to bring it into relief.

However, a number of things that Rick said in his post have been borne out by the spill in Galveston, namely:

Of course, it remains to be seen whether many of Rick’s observations will be reinforced through this spill. These include oil spills can cause long-term environmental damage and that oil spill restoration is impossible.

We at Greenpeace believe the others—including the need to increase liability limits, the need to shift from a dependence on oil, the need to move toward a sustainable society and the fact that oil money corrupts democracy—are self-evident.