Texas Pipeline Spills 600,000 Gallons of Oil One Week Before DAPL Is Approved 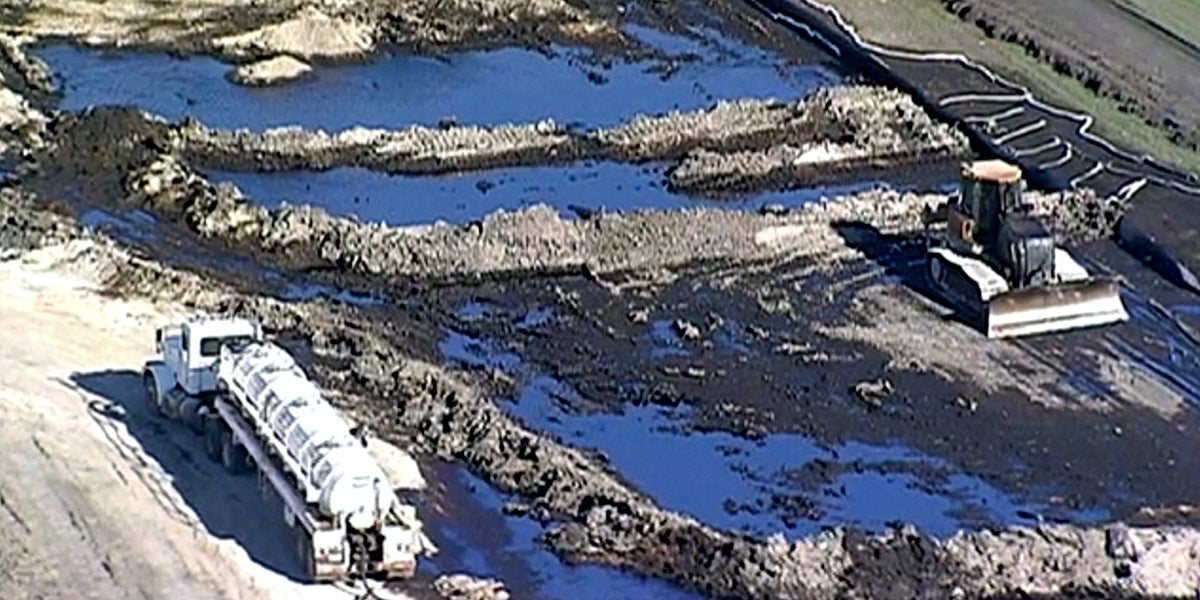 Seaway is half owned by Enbridge and serves as the final leg of a pipeline system DeSmogBlog has called the “Keystone XLClone,” which carries mostly tar sands extracted from Alberta, Canada, across the U.S. at a rate of 400,000 barrels per day down to the Gulf of Mexico. Enbridge is an equity co-owner of the Dakota Access Pipeline, which received its final permit needed from the U.S. Army Corps of Engineers on Feb. 7 to construct the pipeline across the Missouri River and construction has resumed.

The alignment of Native American tribes, environmentalists and others involved in the fight against Dakota Access have called themselves “water protectors,” rather than “activists,” out of concern that a pipeline spill could contaminate their drinking water source, the Missouri River.

Brittany Clayton, who works at a nearby gas station in Blue Ridge, which is 50 miles from Dallas, Texas, was close to the scene of the spill when it occurred.

“You could just smell this oil smell. A customer walks in and says ‘nobody smoke.’ You could see it just spewing,” Clayton told KDFW-TV, the local Fox News affiliate in the area. “It was just super huge. It was like a big cloud. The fire marshal said, ‘This is like a danger zone. You guys have to evacuate immediately.’ I was totally freaked out. I kept texting the boss man.”

Enbridge and co-owner Enterprise Products Partners said in press release that the spill had been contained and it resumed service on Feb. 5.

“The incident … resulted in no fire or injuries and the pipeline has been shut down and isolated,” the companies said. “Seaway has mobilized personnel and equipment to the site and is working closely with emergency responders, law enforcement and regulatory authorities to conduct clean-up operations and develop a plan to resume operations as quickly and safely as possible.”

According to KDFW, the Texas Department of Transportation (TxDOT) and the U.S. Environmental Protection Agency (EPA) intend to do water and environmental testing in the coming days. TxDOT also told the local National Public Radio affiliate, KETR-FM, that it would take “several weeks” to complete a full cleanup.

“It remains too early in the investigation to know where final blame lies for the accident,” wrote KETR, also noting that “it is also too early to tell how much the cleanup and loss of product will cost.”

TxDOT referred DeSmog to the Texas Commission on Environmental Quality (TCEQ) for details on the spill, cleanup and related issues. We have reached out to TCEQ and will update the article as details come in and have also filed open records requests to learn more about the spill.

Chris Havey, Lieutenant Sheriff for the Collin County Sheriff’s Office, confirmed with DeSmog that a spill investigation is ongoing under the umbrella of the EPA and the Texas Railroad Commission, which is the state’s oil and gas regulatory agency.

“The Sheriff’s office is not conducting any parallel investigation,” said Havey. “As to whether or not the line has been shut off/capped, it’s my understanding that within an hour after the line ruptured it was successfully shut off.”

Neither the EPA Region 6 Office nor the Texas Railroad Commission responded to a request for comment. EPA, though, has been ordered not to speak to media by President Donald Trump‘s White House until the agency has a new administrator, likely nominee Scott Pruitt and senior-level staff in place.

As momentum and tensions alike mount surrounding oil and gas pipeline projects around the country, this oil spill is a reminder of the risks and consequences that come with them.