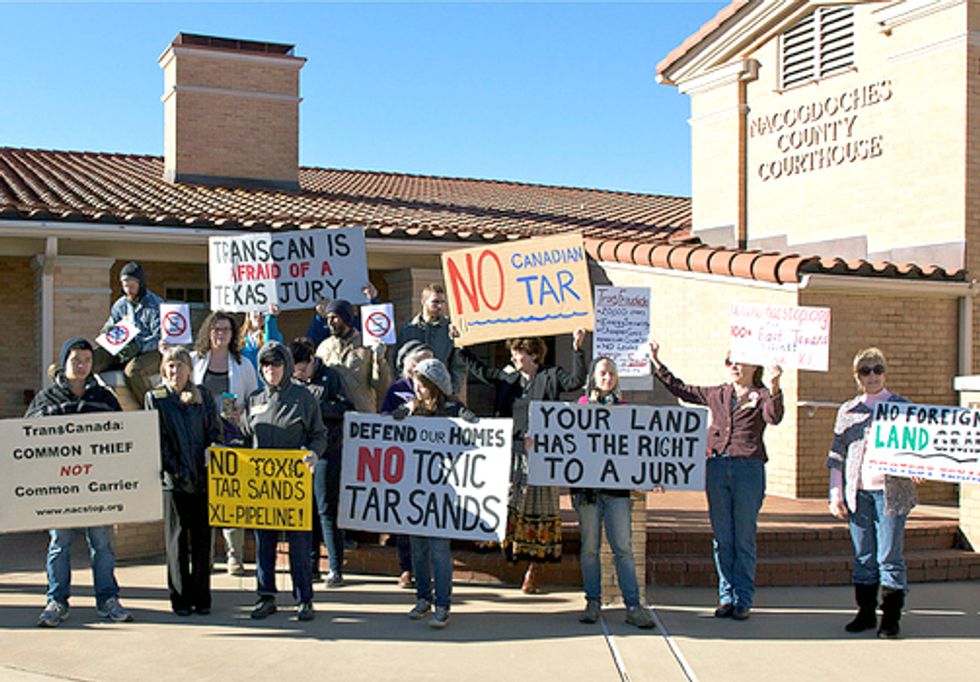 In a blow to landowner’s rights, Texas communities’ waterways and the climate, a county judge in Texas this morning ruled to allow construction of the toxic Keystone XL tar sands pipeline to continue on a landowner’s property until a hearing on Dec. 19. Nacogdoches County Court at Law Judge Jack Sinz reversed the Temporary Restraining Order (TRO) he granted to landowner Michael Bishop from Douglass, TX earlier this week by dissolving the TRO at the behest of TransCanada.

Representing himself pro se, Bishop contends that TransCanada defrauded him and other local landowners in the path of the pipeline about the contents of Keystone XL before threatening to employ eminent domain and other intimidation tactics to seize their land. Bishop will seek an injunction on construction at the Dec. 19 hearing.

Unlike conventional crude oil, tar sands is a heavy, corrosive substance that must be diluted with toxic cancer-causing chemicals and pressurized before being transported through pipelines like Keystone XL. Tar sands extraction alone produces three to five times more carbon pollution than conventional oil.

Bishop and grassroots community groups had the following statements in response to Judge Sinz’s ruling:

Michael Bishop, a retired chemist, Marine Corps veteran and landowner whose land would be crossed by Keystone XL, said: “TransCanada executives may be smirking over Judge Sinz’s ruling today, but they’ve got another thing coming if they think I’ll just roll over for its dirty pipeline. I didn’t pick this fight, but I refuse to sit idly by while a multinational corporation tramples my rights and that of other landowners all along Keystone XL’s path in the name of deepening its profits.”

Vicki Baggett, a member of Nacogdoches County S.T.O.P. (Stop Tar sands Oil Permanently), said: “Today’s court ruling is a strike against our rights to clean water and a safe, healthy future but we remain undeterred. Tar sands isn’t your grandfather’s oil. It’s toxic and dangerous. I refuse to allow my community to become a sacrifice zone for the dirtiest fuel on Earth.”

Ron Seifert, a spokesperson for Tar Sands Blockade, said: “From the streets to the courts, we will not rest until Keystone XL is stopped for good. Michael Bishop’s case is a textbook example of TransCanada bullying and bankrupting any landowner or community member brave enough to say ‘no’ to this monstrous project. We’ll continue to stand with landowners like Mr. Bishop in this David versus Goliath fight to defend our homes and climate from toxic tar sands.”