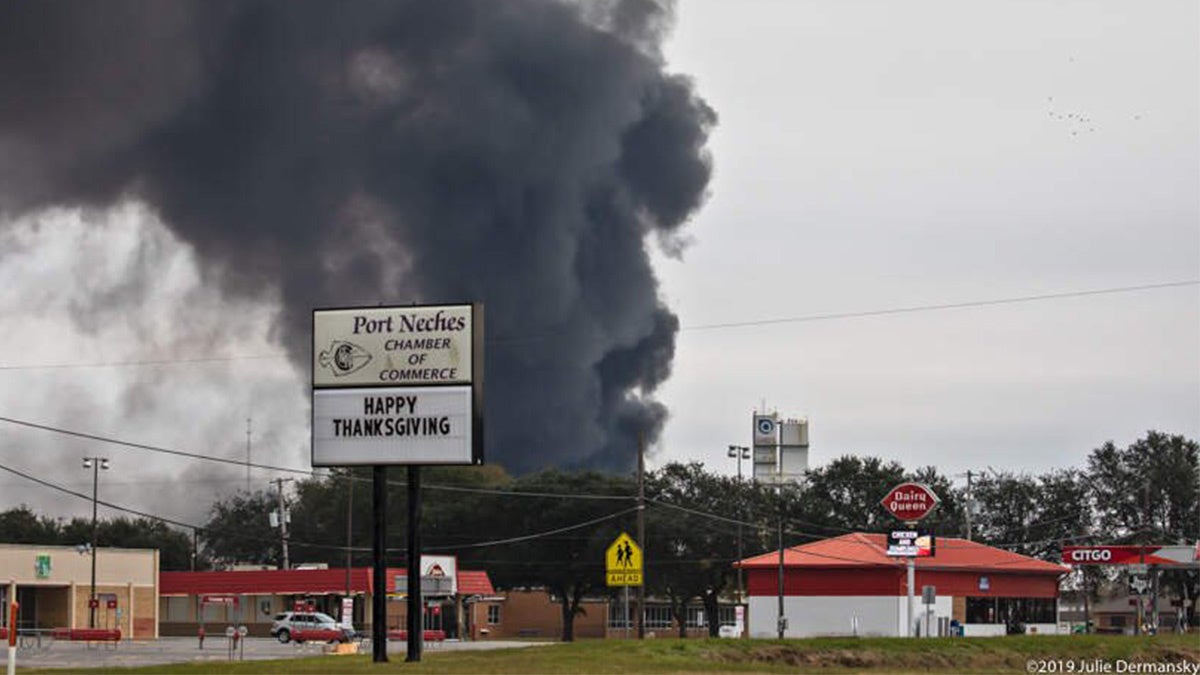 A sign in Port Neches, Texas, on Thanksgiving, with smoke billowing from the TPC plant explosion in the background. All photos and video by Julie Dermansky for DeSmog

A plume from the Texas Petroleum Chemical (TPC) plant hung over Port Neches, Texas on Thanksgiving as emergency workers continued to fight the fire following explosions at the plant on Nov. 27. A mandatory evacuation that called for 60,000 people within a four-mile radius from the plant to leave their homes the day before the holiday was lifted on Nov. 29.

However, officials warned that returning residents be aware of the plume’s location because elevated levels of particulate matter associated with the plume near the plant could be “harmful to sensitive groups,” and direct exposure could result in respiratory irritation.

I visited the evacuation zone on Thanksgiving, figuring not everyone would heed the order. I wanted to see what it was like to be there on one of America’s most widely celebrated holidays. Driving in from Louisiana, I spotted the plume from ten miles to the east in Bridge City, Texas, close to the Louisiana state line.

Although it was clear that many residents had left, it wasn’t hard to find people who remained. I photographed homes within a half-mile of the plant and chatted with residents who were out on the street sharing holiday greetings with their neighbors. They were talking about damage to their homes and the size and the direction of the plume. 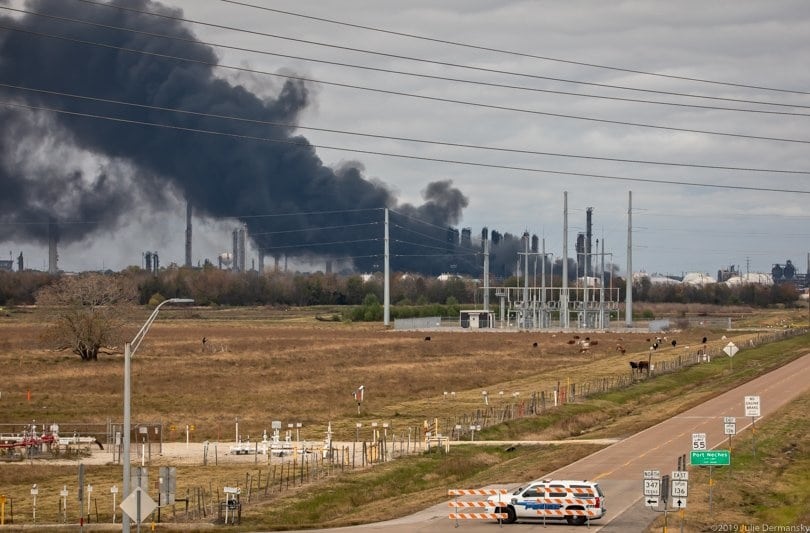 Police block a road leading to the TPC Plant, in Port Neches, Texas. 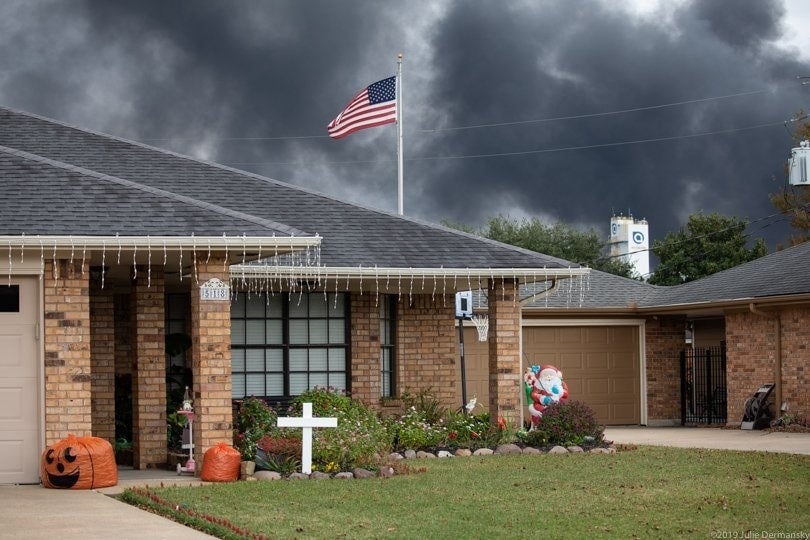 Home about half a mile away from the TPC Plant, in Port Neches, Texas.

TPC’s plant manufactures highly flammable 1,3 butadiene, a known human carcinogen used to make rubber tires and plastics. The explosion was a reminder of the potential risk for those that live near petrochemical plants.

Environmental advocates are questioning if the Trump administration’s rolling back of standards established by President Barack Obama’s administration following the 2013 West, Texas fertilizer plant explosion, could be responsible for the 2019 explosion.

The Texas Tribune reported, “as authorities investigate the cause of Wednesday’s explosions, it’s difficult to say whether the Port Neches incident could have been prevented if the rule had been in effect.”

But Heather McTeer Toney, who was an EPA regional administrator under the Obama administration, said, “What we can say with all certainty is that rules like this are critical to ensuring that we’re at least aware and are doing everything that we can to prevent these types of explosions.”

Charles English, who was working at the TPC Plant during the shift just before the explosion, expressed thanks that he was not there later, because if he had been he could be dead now. He hopes things get back to normal soon, so he can get back to work. 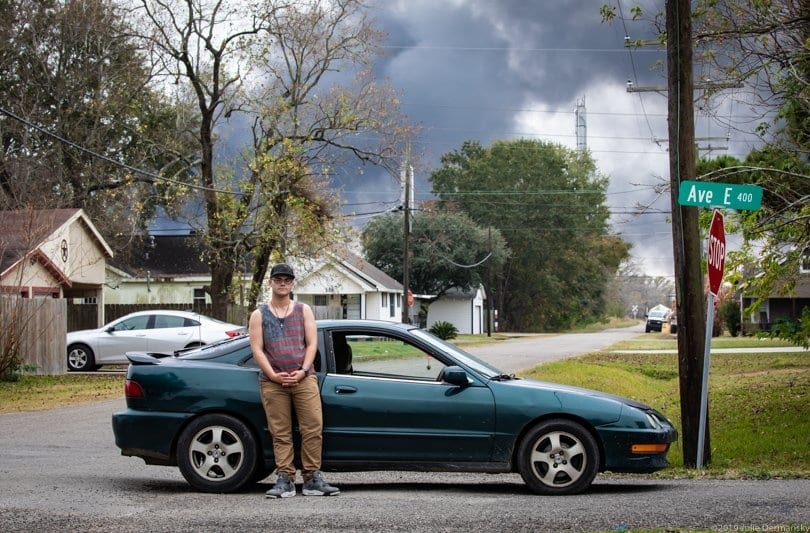 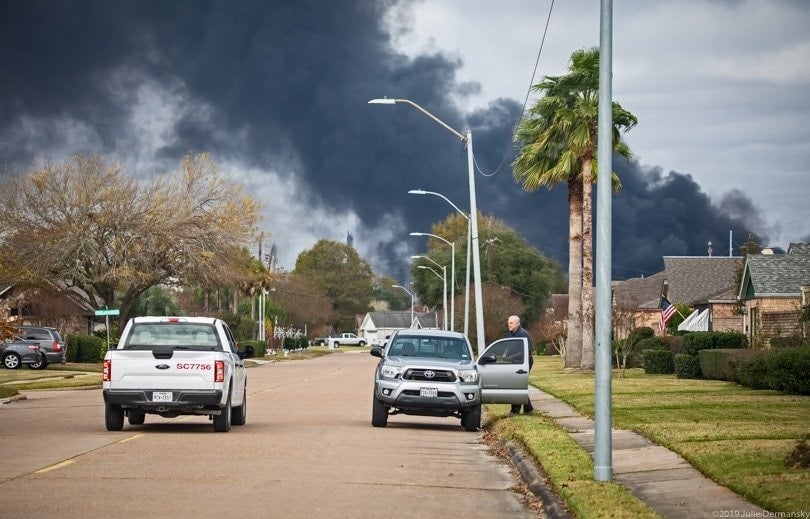 Neighborhood near the TPC Plant in Port Neches on Thanksgiving.

Rodney Gouthier, a longtime Port Neches resident whose house is about a half mile from the plant, told me that in the 32 years he had lived on his block, he never experienced anything like the explosion. “We were blessed not to have more damage than we did,” he said. “Rumor is it was a freak accident. They have always been good neighbors.”

Though Gouthier described TPC as a good neighbor, the company’s record says otherwise. The Texas Tribune reported that the TPC plant “has been considered a high priority violator by the U.S. Environmental Protection Agency (EPA) for more than two years, and been out of compliance with federal clean air laws since the agency’s last inspection in August 2017.”

“Together, the EPA and the Texas Commission on Environmental Quality, the state’s environmental regulatory agency, have fined TPC for air emissions violations more than half a dozen times in the past five years after finding many of the missteps preventable. The last federal censure TPC faced was in 2017 when it was ordered under a consent decree to pay a civil penalty of ,187, make various equipment upgrades and spend no less than 5,000 on fenceline monitoring for butadiene.” 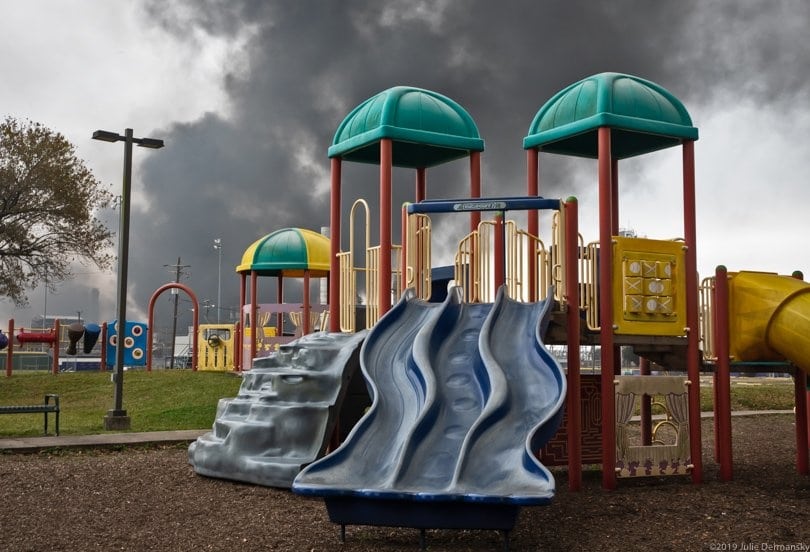 Plume from the TPC Plant moving over a park across from the plant in Port Neches, Texas. 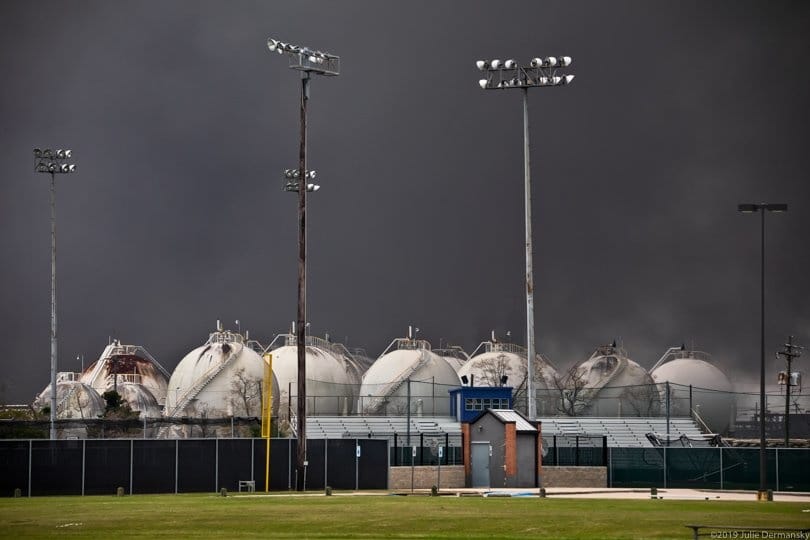 Tennis courts next to the TPC Plant in Port Neches, Texas in front of a giant plume.

Since the explosion, the TCEQ has stated that its air monitoring indicates no human health concerns, even though its website warns that “the incident is causing the release of chemicals called volatile organic compounds (VOCs). Elevated levels of VOCs from this facility are odorous. Short-term exposure to high concentrations of VOCs can cause eye, nose, and throat irritation, shortness of breath, headaches, and nausea.”

Sharon Wilson, Texas coordinator of Earthworks, thinks that looking to the Texas Department of Environmental Protection for help isn’t a good bet considering its track record.

“The Texas oil and gas and petrochemical facilities have one disaster after the other, driving the globe further into climate crisis and causing local communities intense health impacts,” she told me following the incident. “The TCEQ and EPA cannot regulate existing facilities yet they continue to permit more fracking and more oil and gas infrastructure. It’s past time for Texas to stop permitting new oil and gas and rapidly transition to clean renewable energy,” Wilson said.

“I woke up this morning tired, depressed and scared. I cannot be the only person terrified of this disastrous path we’re on,” Angela Blanchard, a Houston-based long-term disaster recovery expert and Brown University senior fellow, told me in an email. She is known for her work as head of the nonprofit Baker Ripley, that helped countless people after Hurricane Harvey by rapidly opening shelters.

Although she has been committed to developing solutions for community challenges that the rest of the country will face due to sea level rise from climate change, she didn’t offer any of the optimistic, uplifting thoughts she usually dispenses.

Instead she concluded, “The plant expansions continue at a record pace. We are committing a kind of collective suicide.” 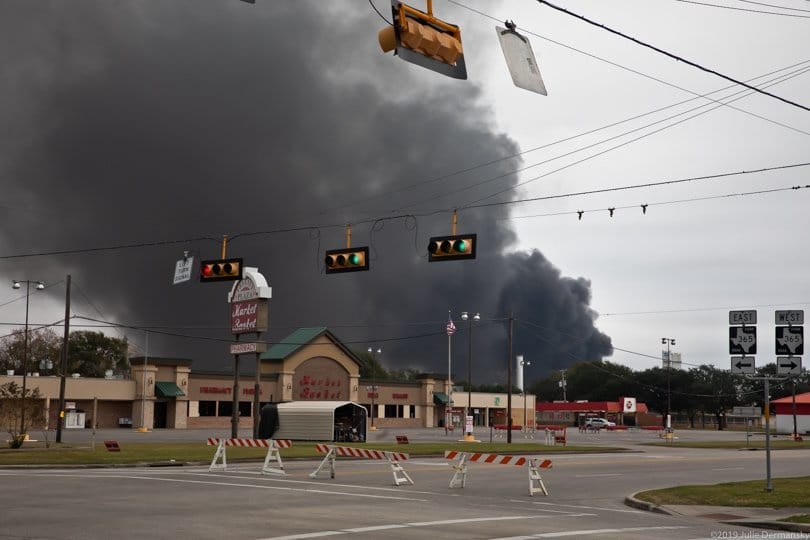 Blocked off intersection in Port Neches, Texas on Nov. 28. 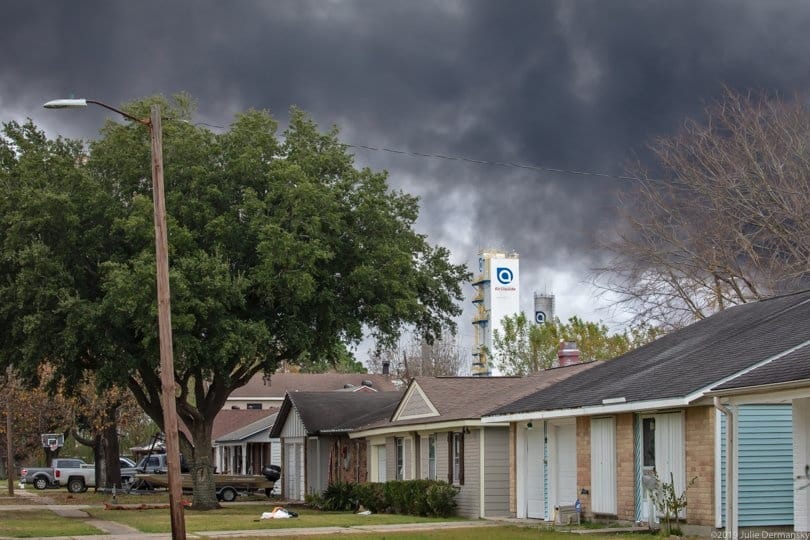 Plume coming from the TPC Plant on Nov. 28.