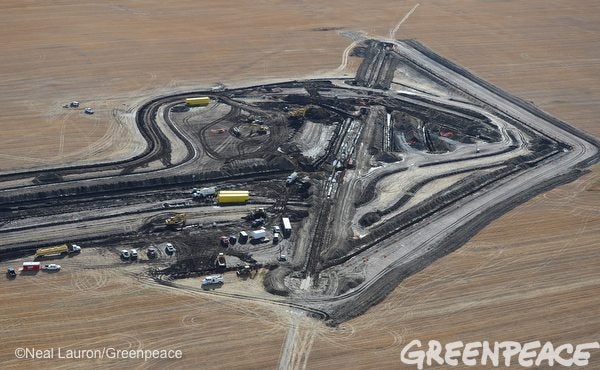 In September 2013, a Tesoro Corp. pipeline ruptured in a wheat field near Tioga, North Dakota, spewing 840,000 gallons of fracked oil from the Bakken Shale, causing one of the biggest onshore oil spills in recent U.S. history. More than three years later, only a third of the spill has been recovered. To make matters worse, as the Associated Press reported, Tesoro has not even set a date for clean-up completion despite ’round-the-clock work to fix the break.

Cleaning up the spill will set Tesoro back an estimated $60 million. Crews have had to dig 50 feet underground to remove hundreds of thousands of tons of oil-tainted soil, North Dakota Health Department environmental scientist Bill Suess told the AP, adding that he worries that much of the oil may never be completely removed.

Critics of oil pipelines argue that spills are not just a question of “if” but “when.” Spills are a common occurrence across the country. In fact, there have been more than 3,000 significant incidents since 2006, at a cost of $4.7 billion.

“The fact that crews are still trying to clean up Tesoro’s spill from over three years ago shows just how unsafe these pipelines are,” Greenpeace spokesperson Perry Wheeler told EcoWatch.

“There have been well over 200 significant spills across the country in 2016 alone, yet we continue to see fossil fuel companies downplay their impacts and rush them through approval processes,” Wheeler added.

There have already been 220 'significant' pipeline spills already this year. https://t.co/8f5iciNgkc via @EcoWatch

On Dec. 5, a pipeline operated by the Belle Fourche Pipeline Company leaked more than 170,000 gallons of crude oil into a tributary of the Little Missouri River and into a hillside. The spill is significant because it occurred just 200 miles away from the Water Protectors’ stand against the heavily contested Dakota Access Pipeline (DAPL).

“What happened to us happened and we can’t go back,” Patty Jensen, who first discovered the Tesoro spill in 2013 on her farm, told the AP. “But I get really upset when I hear of a new one and I wonder what is being done to prevent these spills.”

The oil industry also seems to think that pipeline spills are inevitable. Following the Tesoro break, North Dakota Petroleum Council President Ron Ness commented to KQCD, “You know, this is an industrial business and sometimes things happen and the companies are certainly responsible to take care of these things when they happen.”

Energy Transfer Partners, the company building the DAPL, insists that their pipeline is safe. Compared to the Tesoro and Belfield pipelines made of 6-inch steel, the DAPL is made of 30-inch steel.

Energy Transfer Partners CEO Kelcy Warren said in an interview, “Our pipeline is very, very safe” and has vowed to move the pipeline’s construction forward despite the Army Corps of Engineers officially denying the easement earlier this month, which is needed to complete the project.

The Army Corps’ decision was a major victory for the Standing Rock Sioux and for the Keep It in the Ground movement that urges a transition away from fossil fuels and towards renewable energy.

“The resistance we have seen at Standing Rock must be replicated across the country,” Wheeler concluded. “There’s no such thing as a safe pipeline. They will always jeopardize someone’s land and water supply. We must keep the world’s remaining fossil fuels in the ground and move quickly to clean energy.”

The momentum towards sustainable energy will need as much support as it can get once President-elect Donald Trump is in office. Trump’s pick to head the Department of Energy, former Texas Republican Gov. Rick Perry, is on the board of Energy Transfer Partners.