Tesla Model S for Kids Gets Next Generation Pumped About EVs 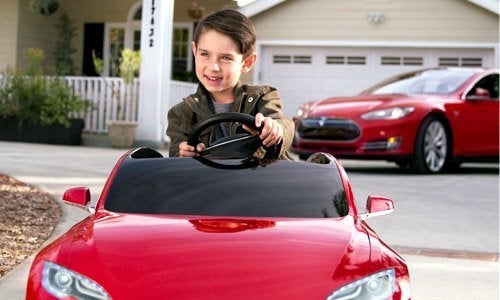 The toy company that brought you the classic red wagon has developed a Tesla Model S for Kids. Toy company Radio Flyer partnered with Tesla Motors to create the first and only ride-on car for children to be powered by a Flight Speed lithium ion battery.

The Tesla Model S for Kids comes in red, blue or silver and can go up to six miles per hour. Photo credit: Radio Flyer

Designed for children ages 3-8, the car reaches a max speed of six miles per hour and the battery can be recharged in just three hours. Just like the adult-sized version, customers pick out the paint color, performance, accessories and personalization.

The car comes in silver, blue or red and features working headlights, a frunk (front trunk) and a sound system that can plug into mobile devices. The basic model costs $499, but customers can make upgrades such as a more powerful battery for “50 percent more playtime per charge.” You can pre-order now with shipping beginning in May.

This baby Model S really is quite fun https://t.co/40W5sS5bKI

There are other competing electric toy car brands, such as the $599 Arrow Smart-Kart from Actev Motors and $525 kid-sized Mercedes Benz model. And while some may write these toys off as a luxury product for wealthy families, these kid-sized cars could encourage the next generation to get excited about electric vehicles and push to expedite a low-carbon, renewable energy future.

Last month, a USA TODAY/Rock the Vote Millennial Poll found that the under-35 generation ranked converting to renewable energy and taking action on climate change as two of the most pressing issues the next president will face.

And Elon Musk’s Tesla and SolarCity are working to revolutionize the energy grid. The two companies partnered up last year to fit rooftop solar panels with Tesla’s batteries, which store the energy produced by the panels during off-peak time for later use. That technology allows users to generate energy from the sun during the day and store it until they need it later at night, say, to charge their adult- or kid-sized electric cars.