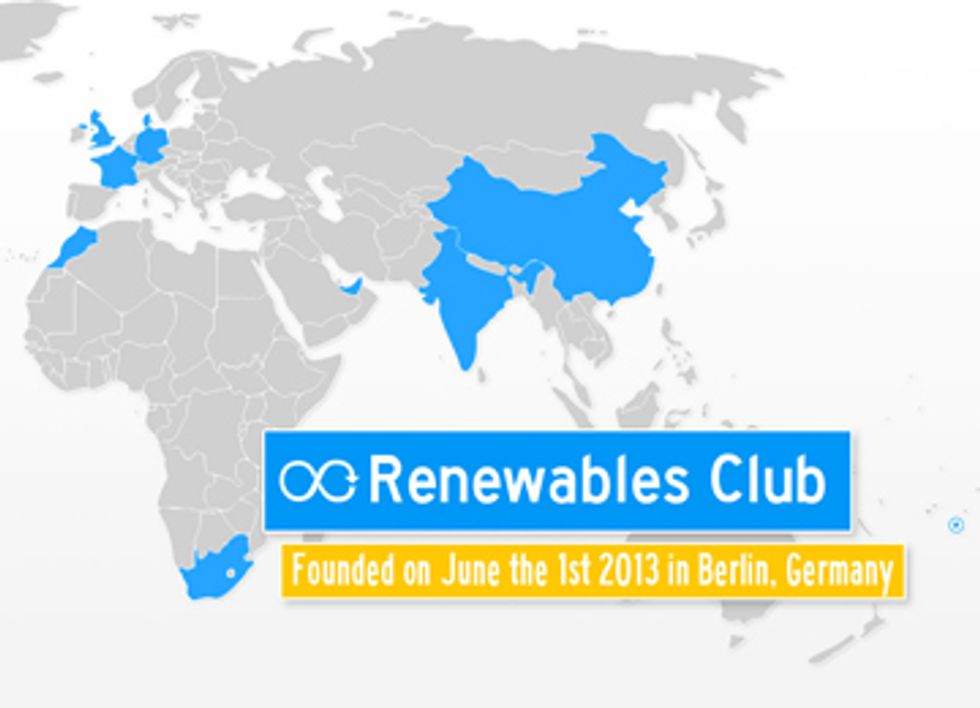 On the invitation of the German Environment Minister Peter Altmaier, high-level representatives from 10 countries have gathered in Berlin to establish the Renewables Club on June 1. Their common goal is to scale up the deployment of renewable energy worldwide. Founding members of this pro-renewable alliance are China, Denmark, France, Germany, India, Morocco, South Africa, Tonga (as a representative of small and medium-sized island nations), United Arab Emirates, United Kingdom and the director-general of the International Renewable Energy Agency (IRENA).

Members of the Renewables Club at the launch on June 1, in Berlin, Germany.

“As members of the Club, we aim to lead by example,” said Minister Altmaier. “The Renewables Club is a political initiative of pioneering countries that are united by an important goal: a worldwide transformation of the energy system.” In such a system, renewable energy should play a key role in the future global energy supply.

“We are determined to work together as advocates and implementers of renewable energy at global level,” said Altmaier. “We in Germany do not stand alone with our Energiewende [energy transition], but are a part of a strong group of leaders.”

The Renewable Club's purpose is to supplement and support IRENA.

“Renewable energy is not only a good way of combating climate change, it also contributes to prosperity and supply security throughout the world,” said Minister Altmaier. “Especially at a time of growing energy demand, this is the attraction of renewable energy for countries all over the world.”

The Renewable Club members agreed to unite in putting renewable energy on the political agenda in the future. At the next UN climate conference, club members plan to jointly present the advantages of renewable energy for prosperity, climate and sustainable development. As a network and driver of ideas, members also aim to generate incentives for projects promoting the global transformation of the energy system.

While the formal foundation of a club of pro-renewable energy nations did not come with any binding targets nor joined projects, it does send out some very powerful messages. One of the most important messages is probably the fact that 10 diverse nations publicly declare that the world has to move to a renewable future at this moment to deal with many of the challenges of our time. The following is a statement from the Renewables Club:

We recognize that, with the global energy demand predicted to rise  tremendously in the years to come, countries are facing investment and infrastructure decisions on a scale that will define the development of generations to come. We also recognize that the current energy system as it stands right now poses risks to the climate, environment, poverty eradication, energy security and development, in particular in most vulnerable countries.

We are convinced that renewable energy, including transmission and interconnection infrastructures, is an essential part of the solution to the existential challenges we are facing and the means to transform the path to sustainability. We stress that renewable energy has entered into a virtuous circle of falling costs, increasing deployment and accelerated technological progress, renewable energy technologies now representing economical choices in an increasing number of countries and regions.

What is even more impressive than the refreshingly clear language are some of the statistics and facts on the Renewables Club, even in its current 10-member set up:

In all fairness, the establishment of this club is perhaps just some symbolic low-level political “noise,” but it might also be the beginning of an important international institution that acts as a strong voice for the proven working solutions to many of the world’s problems, and as a spearhead against many of the political barriers that hinder progress today.

Perhaps a good indication of the latter is the fact that the formal foundation of this “coalition of the willing” or “axis of renewables” initiated by the German government was precluded by many bilateral agreements, cooperation treaties and even explicit development projects.