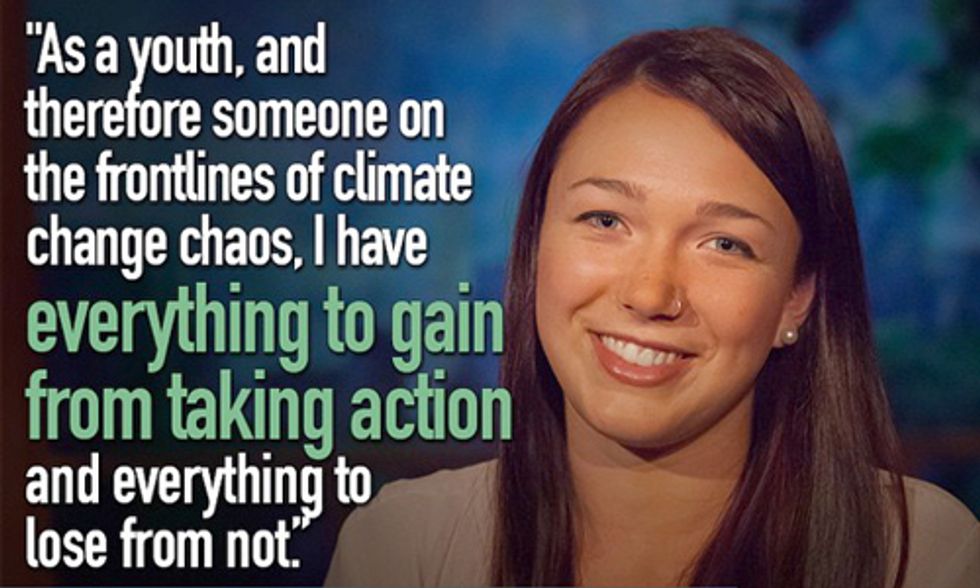 Many young people feel they have too much at stake to wait for our leaders to get their act together and take meaningful action on climate change. In the words of one young climate activist, Alec Loorz, we need to demand our political leaders "govern as if our future matters." With their future at stake, many youth have taken their case to the courts in the hopes that the judiciary will require the legislature to take action.

Kelsey Juliana is one of the young plaintiffs in the Oregon case that is asking her state government to bring down carbon emissions in compliance with what scientists say is necessary to avoid catastrophic climate change. Photo credit: Dale Robbins / Moyers & Company

"We are all in imminent danger," Loorz, who founded the nonprofit Kids vs. Global Warming, told Outside Magazine. "Scientists have said we have 10 years to make changes if we want to stabilize the climate by 2100—and that was back in 2005 ... We care more about money and power than we do about future generations. The judicial system is the only branch of government not bought out by corporate interests."

On Bill Moyer's show last month, Mary Christina Wood, law professor at the University of Oregon and author of Nature's Trust: Environmental Law for a New Ecological Age, explains what is being called the "Children's Climate Crusade."

What exactly are these young people asking for? "Every suit and every administrative petition filed in every state in the country and against the federal government asks for the same relief," Wood says. "And that is for the government ... to bring down carbon emissions in compliance with what scientists say is necessary to avoid catastrophic climate change."

The young plaintiffs simply want the courts to require "the legislatures and the agencies to do their job in figuring out how to lower carbon emissions," says Wood. Do these litigants have any legal grounds to stand on, though?

Turns out, yes. "You find it in case law going back to the beginning years of this country," says Wood. "The U.S. Supreme Court has announced the Public Trust Doctrine in multiple cases over the years and it's in every state jurisprudence as well."

The Public Trust Doctrine says "the government is a trustee of the resources that support our public welfare and survival," according to Woods. The doctrine "requires our government to protect and maintain survival resources for future generations." Relying on this long-standing legal principle, young plaintiffs have cases at the state and federal level.

At the federal level, five teenagers, and two non-profit organizations—Kids vs. Global Warming and WildEarth Guardians—partnered with Our Children's Trust to file a federal lawsuit. Their petition for their case to be heard by the U.S. Supreme Court was denied in December, but the plaintiffs vow "to advance their climate claims in lower federal courts until the federal government is ordered to take immediate action on human-made climate change."

At the state level, there are cases pending in Oregon, New Mexico, Pennsylvania, Massachusetts, Washington and Colorado. Courts in Alaska, Texas, Arizona, Kansas, Montana and Pennsylvania have issued "developmental decisions on which the pending cases are in part based." Youth plaintiffs supported by Our Children's Trust have filed administrative rule-making petitions in every state in the country.

“I think there are a lot of kids here in Colorado and around the world who would be so excited to get the gift of clean air and water, snow in the mountains, abundant wildlife and safe communities," said Xiuhtezcatl Martinez, one of the young plaintiffs in the Colorado anti-fracking case, after learning the court rejected the Colorado Oil and Gas Conservation Commission's request for dismissal of their lawsuit. "New York showed us all [by banning fracking] that a state can value the health of kids as a top priority. That’s what this whole thing is about, making Colorado a safe place to live for ours and future generations."

Oregon's and Massachusetts' cases are moving forward. Legal arguments began last month in Oregon's case and will culminate in a court hearing before Judge Rasmussen once again on March 13.

The Oregon Court of Appeals ruled last summer that "The court must decide whether the atmosphere is a public trust resource that the state of Oregon, as a trustee, has a duty to protect along with recognized public trust assets such as estuaries, rivers and wildlife." Now the plaintiffs will argue in the Circuit Court that not only does the state have a duty to protect the atmosphere, "but that it is violating its trustee obligation to present and future generations if it does not."

Kelsey Juliana, one of the young plaintiffs in the Oregon case, said, "As a youth, and therefore someone on the front lines of climate change chaos, I have everything to gain from taking action and everything to lose from not."

In Massachusetts, Judge Gordon will hear oral arguments on March 9 in a case brought by four young litigants who say that the Massachusetts Department of Environmental Protection is "failing to fulfill its legal obligations to reduce Massachusetts' greenhouse gas emissions, as required by the Massachusetts Global Warming Solutions Act."

Watch these videos from the iMatter campaign, an initiative of Kids vs. Global Warming and Our Children's Trust to see what's at stake for young people and how they are driving change: