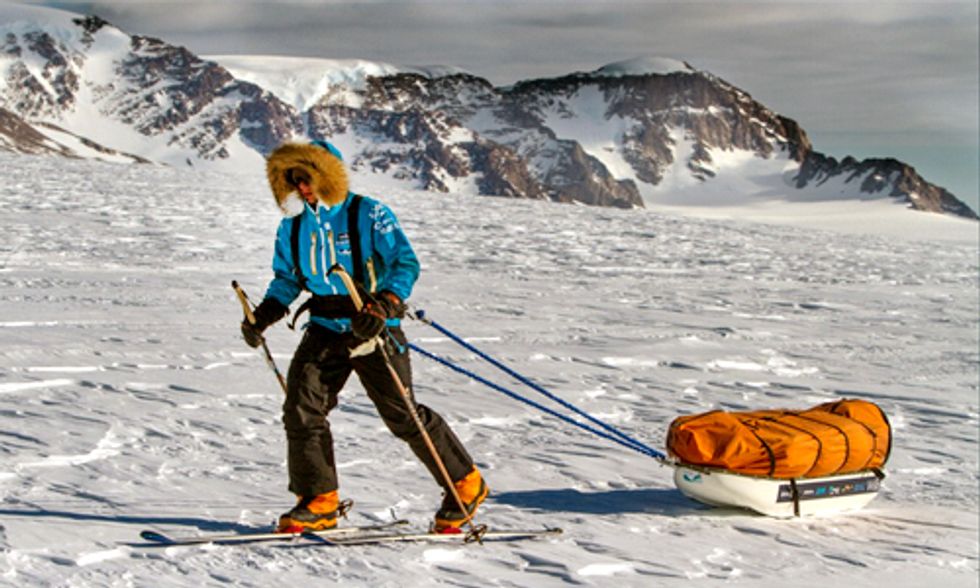 Regardless what you were doing at age 19, there's a great chance it differs greatly from Parker Liautaud's experience.

On Dec. 3, the Yale University sophomore began his attempt at breaking a world record for the fastest ski trip from the coast of Antarctica to the South Pole. The 397-mile expedition is expected to take at least 22 days. Yesterday, Liautaud's expedition blog—hosted by trip sponsor and insurance broker Willis Group Holdings—said he had been braving -4-degree temperatures with more than 200 nautical miles remaining to reach the South Pole.

The 22-day record attempt is one portion of the 2013 Willis Resilience Expedition, which includes an additional 18 days of collecting scientific, climate data over the course of a 1,900-mile hike from Union Glacier to Leverett Glacier. With the help of veteran explorer Doug Stoup, Liautaud is completing a study with snow samples, measuring and transmitting climate data with the pilot model of the ColdFacts-3000BX weather station.

Aside from responses about the frigid conditions, Liautaud mostly wants to talk about one thing—climate change. By skiing across a territory most people only read about, he hopes to demonstrate the parallel between his own perseverance and the endless possibilities and potential of our planet and the people who live on it. If a Palo Alto, CA native can make it to the South Pole, let alone break a record, surely we can tackle a complex but manageable issue like climate change.

"There are many people who believe that climate change is an issue that is just too big a challenge for us to overcome, but we cannot be intimated by the scale of the challenge," he said about a year ago when he announced his journey.

"We must remember that success in the face of difficult circumstances depends on our ability to take one strong step forward at a time."

Liautaud has maintained that attitude for about a week now, even going as far as to say he's "lucky to be here" in his latest blog entry. Liautaud has hiked to the North Pole three times since he turned 15, but that doesn't make this adventure any easier. He pulls a 180-pound sled for much of his 12-hour days, sometimes facing winds traveling at 20 to 30 knots.

There's room for loneliness, too. Stoup is the only person accompanying him. A six-wheel Toyota Hilux serves as the communications hub for the expedition and follows the two men, filming, streaming and providing data.

"In the 24 hour daylight of Antarctica, they will experience temperatures up to -40 degrees centigrade and one of the most hostile environments on earth," according to the Willis Resilience Expedition website.

According to Willis, the attempt is unsupported because the truck provides no assistance Liautaud and Stoup. They planned to change into their skis at Leverett Glacier to begin the ‘Coast to Pole’ speed record. Liautaud also has a chance to become the youngest male to achieve that feat.

Parker and Doug set off from the Ross Ice Shelf and worked their way towards the Leverett Glacier on Dec. 6. Photo credit: Willis Resilience Expedition

Liautaud partnered with academic institutions on each of his trips to the North Pole to gather climate data. As an ambassador for One Young World, he has already begun bonding with other young leaders from around the world who are concerned about the dangers of climate change.

He has addressed more than 1,200 delegates from 190 countries with One Young World and is buddies with Al Gore, who deemed him "an inspirational young man" via Twitter after the two spoke at the Social Good Summit in September.

Liautaud came face to face with climate change during one of those North Pole trips, where he came about 15 miles short of reaching the pole.

"The temperature got really, really high, there was drift away from the North Pole, and the summer melting period started a little early," he told his student newspaper, The Yale Herald, earlier this year.

That led him to focus on research, until his ongoing expedition, of course. The geology and geophysics major wants to become a scientist and be the catalyst for productive conversations regarding climate change.

"By productive, I mean actually engaging policy makers, and we did that a little bit last year," he said. "We created a campaign [named Wake-Up Call], in 87 countries.

"We changed policies in countries like Nepal [and] Algeria."

On day No. 2 of the world record attempt, Parker and Doug did 18.1 nautical miles in 11 hours and 45 minutes. That was around one mile less than day No. 2, as the duo had to get up to 5,200 feet in altitude. Photo credit: Willis Resilience Expedition

In order to break the record, Liautaud and Stoup will need to travel about 18 miles per day. The previous record is just two years old, set by Christian Eide of Norway. His coast-to-pole trek took 24 days, one hour and 13 minutes.

"I’m happy with our progress so far. It’s been mentally challenging at the end of each day," Liautaud said in his blog for day No. 4.