Ted Glick: It's Time to Seize the Moment and Ratchet Up the Pressure 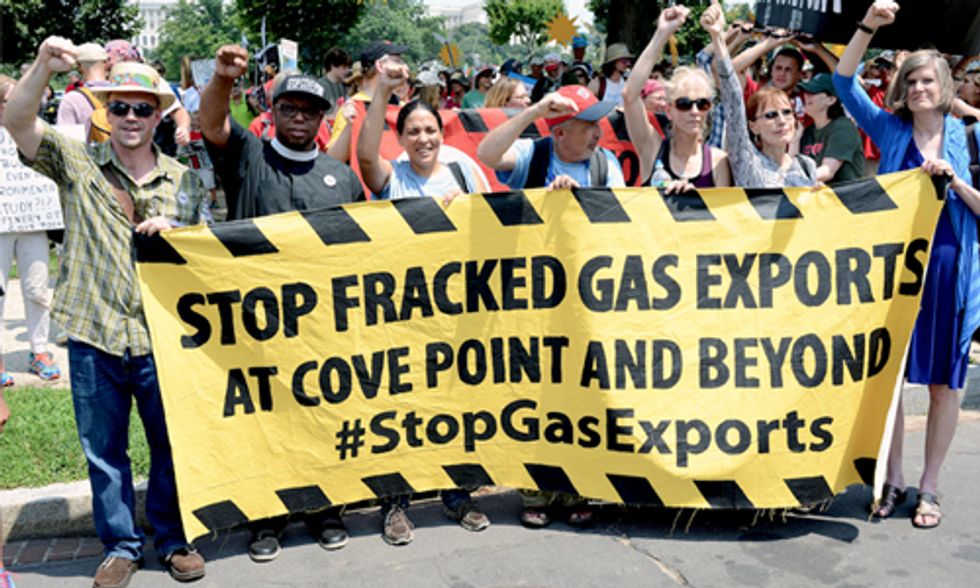 For the third time in less than two years, I met yesterday with the chair of FERC, the Federal Energy Regulatory Commission. I was not alone. With me from the “good guys” side were Tracey Eno, leader of Calvert Citizens for a Healthy Community in Cove Point, Maryland; Jocelyn D’Ambrosio of Earthjustice and; via phone because her plane arrived late due to weather, Sandra Steingraber from We Are Seneca Lake.

On the “power” side were FERC chair Cheryl LaFleur and literally eight other FERC staff from various parts of their bureaucracy.

More than 2,000 climate justice activists assembled for a rally and march—in Washington, DC at The National Mall on July 13, 2014—to the Federal Energy Regulatory Commission in opposition to the expansion of a natural gas transfer and storage facility at Cove Point on the western shore of the Chesapeake Bay. Photo credit: Stephen Melkisethian/Flicr

My first time meeting with the then-FERC Chair Jon Wellinghoff was in May of 2013. The second time was last June with Cheryl LaFleur. In both cases, as was true of this one, the meetings happened after I and others had gone to one of FERC’s monthly commissioners’ meetings and made our presence felt.

A month ago, after going to FERC with representatives of Green America for a meeting they had set up with Commissioner Phillip Moeller, I was “banned,” the security guard’s word, from the FERC building, escorted out of the meeting room on the 11th floor we had been taken to just as the meeting was about to start. However, several hours later, after contacting someone I knew in the press, I got a call from the executive director of FERC apologizing and telling me I was not banned.

The meeting yesterday was requested just before my temporary banishment. It was requested on behalf of Beyond Extreme Energy, which has been ratcheting up the pressure and putting a public spotlight on the many serious problems with the way FERC works. Robert F. Kennedy, Jr. has called it “a rogue agency.”

What was our hope in requesting the meeting? Our hope, slim as we knew it to be, was that perhaps in the context of a “civilized” sit-down in this way, we could see some signs that the campaign that has been building over the last couple of years to make FERC work for the people and not the fossil fuel industry has had some impact.

There was little sign of that yesterday. After we raised our well-reasoned criticisms of FERC, their rubber-stamping of proposed gas infrastructure expansion projects, their minimal efforts to prioritize wind and solar technologies, they didn’t have much to say. After we pushed it, LaFleur did reference some rule changes they had made to make it easier for those technologies to become part of the electrical grid, and another person did want to know more of our thinking about what they should be doing in the area of renewables. But as Steingraber said afterwards, LaFleur’s main response was to say, in effect, “We’re trying to take it in, we are listening,” little more.

The one exception to this was in the area of FERC’s processes—their website, the meetings they set up and how they deal with administrative appeals after granting a permit for gas infrastructure expansion. There was a bit more, not much, back and forth with FERC staff in these areas. Perhaps, over time, we will see some modifications. Time will tell.

The meeting made crystal clear that we need to sieze the time and ratchet up the pressure. Fortunately, Beyond Extreme Energy is doing so, moving forward with its week-plus of action at FERC from May 21-29. That’s when our growing movement can show our power and speak the truth in powerful ways to those using theirs wrongly. Our children and grandchildren are calling upon us to step it up right now!

The Speech I Gave to FERC From Baggage Claim Area 3