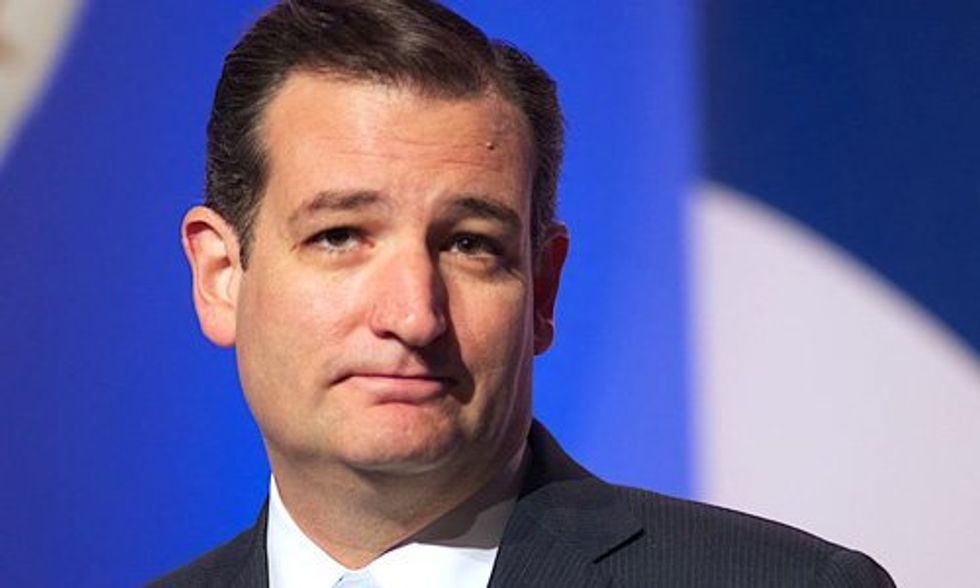 In the U.S. Senate, witnesses at committee hearings swear to tell the truth. Unfortunately, the senators grilling them don’t take the same pledge, so Sen. Ted Cruz (R-Texas) won’t be sanctioned for misleading a Judiciary Committee panel this week with claims of a supposed “pause” in global warming, which he hopes will sow doubt about the accepted science behind climate change.

During his hearing this week, Sen. Ted Cruz ridiculed the idea that 97 percent of climate scientists agree that human activity is contributing to the warming of the planet. Photo credit: Flickr user jbouie

This isn’t the first time Cruz and the climate denier community have focused on a disputed claim that there has been no increase in global temperatures over the last 15 to 18 years, nor is it the first time actual scientists have had to debunk his conclusions. A March 27 Fact Checker column in the Washington Post looked at Cruz’s comment on a late night TV show that “satellite data demonstrate for the last 17 years, there’s been zero warming.” The Post delved into the science behind the issue and gave Cruz three out of four Pinnochios, finding his claim was “mostly false.”

Carl Mears, a physicist and senior scientist at Remote Sensing Systems whose work was cited by the senator’s staff in defending Cruz’s claim, has since come forward in the Post to reject the way his data is being used by Cruz:

Mr. Cruz … likes to cite statistics about the last 17 years because 17 years ago, the … observed temperatures were substantially above normal … When one starts their analysis on an extraordinarily warm year, the resulting trend is below the true long term trend. It’s like a pro baseball player deciding he’s having a batting slump three weeks after a game when he hit three homers because he’s only considering those three weeks instead of the whole season.

Even more recently, the National Oceanic and Atmospheric Administration released a study concluding that there has been no pause in global warming during the years cited by Cruz. “The new data include more extensive and improved surface air temperature observations taken at thousands of weather observing stations over land, and for ocean sea surface temperature there are new observations from commercial ships and drifting surface buoys,” writes Antonia Herzog, deputy director of the Climate and Clean Air Program at the Natural Resources Defense Council.

During his hearing this week, Cruz also ridiculed the idea that 97 percent of climate scientists agree that human activity is contributing to the warming of the planet, saying the figure had been discredited. But when watchdogs such as PolitiFact look into it, they find climate deniers are cherry-picking evidence for that claim. A review of nearly 12,000 climate abstracts published between 1991 and 2011 found that more than 97 percent of papers expressing an opinion on the matter endorsed the consensus that human activity contributes to climate change. NASA has long backed up the claim of overwhelming scientific consensus on man-made climate change, and a recent study of the broader scientific community found nearly 92 percent of non-climate scientists agree. There is overwhelming scientific agreement that the energy choices we make have a significant influence on our climate.

Scientists don’t ignore new evidence when it contradicts earlier theories, but it seems Sen. Cruz and the climate deniers are not interested in any data or study which contradicts their own ideology or threatens the party line fed to them by their fossil fuel industry benefactors. That allows them to stand before the American people and refuse to tell the truth, the whole truth and nothing but the truth.

Michael Bloomberg and John Kerry: All Climate Change Is Local