Taxpayers Footing the Bill for the Nuclear Renaissance in Florida 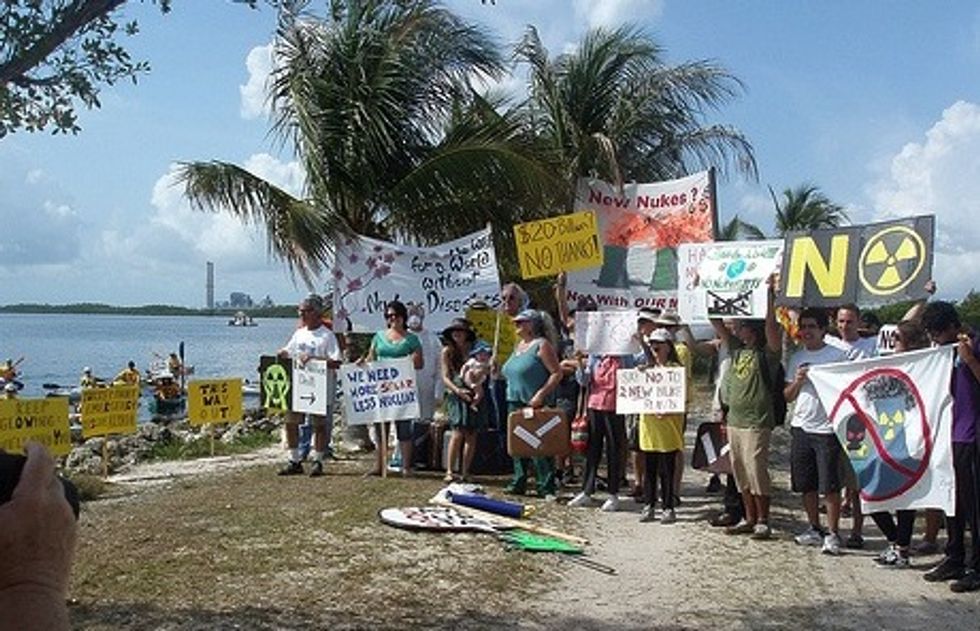 The Wall Street Journal trumpeted the news late last week that the “nuclear renaissance” is alive and well, explaining how the Florida legislature has been instrumental in bringing this point home to its citizens. The problem is, the citizens of the Sunshine State didn’t really have much of a say in the matter.

Actually, it is doubtful that most even knew about the nuclear cost recovery legislation that has been hidden in the energy bills of customers of Florida Power & Light (FPL) and Progress Energy (now a Duke subsidiary) since 2006. The legislation is a way to get new nuclear power plants up and running on the backs of taxpayers. No one denies this. What has been denied is the rights of the people to know the costs that have been hoisted on their backs and what this means in terms of actual benefits. This is what the nuclear renaissance looks like.

Alex Flint of the Nuclear Energy Institute, as quoted in the Wall Street Journal article, was quick with his praise for this encouraging example from the ethically-challenged Florida politicians, for his preferred brand of “democracy”:

Florida's legislators did the right thing in allowing utilities to preserve the most effective option to finance new nuclear energy facilities if warranted by the state's utility regulators. Doing so gives the state the means to supply reliable, affordable, clean energy for future generations of Floridians.

Reliable? Affordable? Clean energy for future Floridians? Perhaps, the people over at the Nuclear Energy Institute don’t read the frightening reports coming daily from Fukushima, or perhaps they do and don’t give a damn. They can afford excellent health coverage and certainly don’t need to be concerned about their state legislators telling the federal government there is no need to extend Medicaid to its impoverished and uninsured citizens (another low-light from the Florida legislature’s most recent session).

If the average Floridian wanted to tune into the mildly-heated debates in the Florida House, they might have learned that one of the amendments added by opponents would have required a clear reference to the "recovery costs" on the utility customer’s bills. The majority of representatives in the House and Senate would not hear of it. They instead opted for the "idea" of functional representative democracy, as opposed to the practice. By claiming that the legislation was all about saving ratepayers money, many in Tallahassee were patting themselves on their backs for their achievements when the session ended last Friday.

Instead, the truth about their leadership and the notion of a nuclear renaissance is rather obvious. Genuine democratic institutions and the marketplace would never go ahead and accede to a nuclear renaissance in the age of Fukushima and the recent news reports about the Hanford site in Washington, San Onofre, and a host of other problematic plants around that should be shut down immediately. The cleanup costs for nuclear plants are astronomically excessive, especially in a time of austerity budgets. There is still no remotely responsible method of dealing with nuclear waste; the recent Federal court decision against the Department of Energy (DOE) that ultimately punishes the U.S. taxpayers for a political deadlock surrounding the dangerous issue of extremely toxic materials. Under the Nuclear Waste Policy Act of 1982, the DOE is primarily responsible for figuring out a solution to this mess. The environmental and economic legacies (inextricably linked) that we are leaving for future generations should be regarded as criminal, in a just world.

Returning to Tallahassee, since no insurers are willing to back these projects and the costs always spiral out of control, Florida had to go about it another way. The lawmakers there were told by their real constituents in the energy industry that the public simply had to pay for plants that shouldn’t and probably won’t ever get built. The bill SB 1472 was sent to Gov. Rick Scott for signing and the utility companies had to pretend that they were on the “losing side” of this “struggle.” After all, now they will have to march all the way over to the Public Service Commission every year to prove that they actually intend to finish the tax-payer funded utility projects. Poor fellows. However, because of loopholes in the law, these utility companies are able to make huge profits if the projects fail and permanently cease. In other words, they win no matter what.

How much are Florida utility customers paying exactly? It is estimated that around $1.5 billion has been raised since the law first came into play over six years ago. Yet, costs are projected to be around $50 a month per household by 2020 and, if you talk to the average Floridian, they probably couldn’t tell you what this money is for and certainly couldn’t tell you where is it going. Yet, these figures obscure some more obscene realities about nuclear power in this state.

For example, the plant at Crystal River, some 80 miles north of Tampa, closed earlier this year after a long and dangerous history. The plant was plagued by a host of problems making the “watch list” and considered one of the worst-run reactors in 1996. The original operators, Florida Progress Corporation, were cutting corners way back in the early days and this led to a history of problems with reinforcement in the containment building. Eventually, the plant would close multiple times and for long stretches. Duke Energy, a major U.S. nuclear company, had no choice but to close it down for good after it reviewed some very questionable repair estimates upon completing its merger with Progress, thereby forming the largest U.S. utility, in 2012.

On a recent trip to the Crystal River area of western Florida, replete with several national and state parks and a lot more beauty to discover aside from the famous manatees, a few locals told me all these expenses were unnecessary. The Crystal River nuclear plant’s closure was actually due to an absurd plan to replace steam generators, a routine upgrade that was done in dozens of other U.S. reactors by either one of two contractors. Progress wanted to cut costs and in an attempt to save $15 million dollars decided it would do the replacements itself. The ill-fated upgrades in 2009, and maintenance since then, now add up to devastating $1.3 billion, according to Tampa Bay Times. This reckless decision-making surely factored in the taxpayers unwitting support in case a bailout was required.

Meanwhile, the company has plans to build another nuclear power plant nearby in Levy County but costs keep skyrocketing. From original estimates of $5 billion in 2006, current estimates are roughly five times that amount. Worse yet, the date for going online was pushed back from 2016 to 2024. Citizens are outraged and the many seniors in the area are backed by the American Association of Retired Persons, which is opposed to the nuclear costs recovery scheme. Does that affect the overall outcome of the debate around this bilking of taxpayers? Predictably, no.

Florida Power & Light is also planning two new reactors in the Everglades as an addition to their Turkey Point nuclear plant. They are fresh off a public relations victory based on an expansion and upgrades to their existing reactors at Turkey Point and up further north near Port St. Lucie, FL. These plants are in some of the least seismically active places in the country so don’t fret about earthquakes. What is worrisome though are the hurricanes that come sweeping through, with increasing intensity predicted. Hurricane Andrew gave the Turkey Point nuclear plant a thrashing in 1992 when the main water tank and smokestack that were destroyed, in addition to a loss of off-site power. As Alan Farago has pointed out on Counterpunch, there is also the issue of rising seas to contend with and he offers us a glimpse of the nightmarish future in the beautiful and unique swamplands of southern Florida:

Long after seas rise to flood everything around Turkey Point but the 300 acre fill pad to be elevated 20 feet above sea level, [it will look] to future generations like a gargantuan, radioactive flat-topped Mayan temple.

This is what the nuclear industry in a dramatically changing climate looks like.

To circumvent the criticism about this that may come from the camps of Monbiot-bots out there, clearly if nuclear power plants continue to get shut down (Kewaunee in Wisconsin has just been officially closed and California’s San Onofre’s inevitable closure seems likely to follow) the power source must get replaced. It will more than likely get replaced with natural gas and that means more fracking. Of course, this is a terrible choice and I am not about to argue the lesser of two evils. It appears that U.S. citizens need to seriously evaluate the power of their utility companies and challenge them every step of the way forward. They are uniquely influential when it comes to mapping out our energy futures. If left unchallenged, they will make terrible choices that are in their very narrow interests, to hell with their own and everyone else’s grandchildren.

Florida’s energy sector is a classic example of this ridiculous dance the legislators and power company executives do around the citizenry, proclaiming all that hard work of legislating and developing, operating and maintaining power plants is for us. Meanwhile, they grow ever richer and less accountable and average people pay costs that are well beyond the financial realms of existence. Fossil fuels and nuclear are both incredibly dangerous to the health of our planet and species, especially when exploited at the magnitude they are in the 21st century. They threaten our children and our children’s children’s children, unborn and unnamed. They need to be stopped. There is a need for a renaissance but it is of a popular grassroots nature that will roar with intensity and be shaped by the strength and beauty of the affected, who bare their scars and redefine the nature of power.