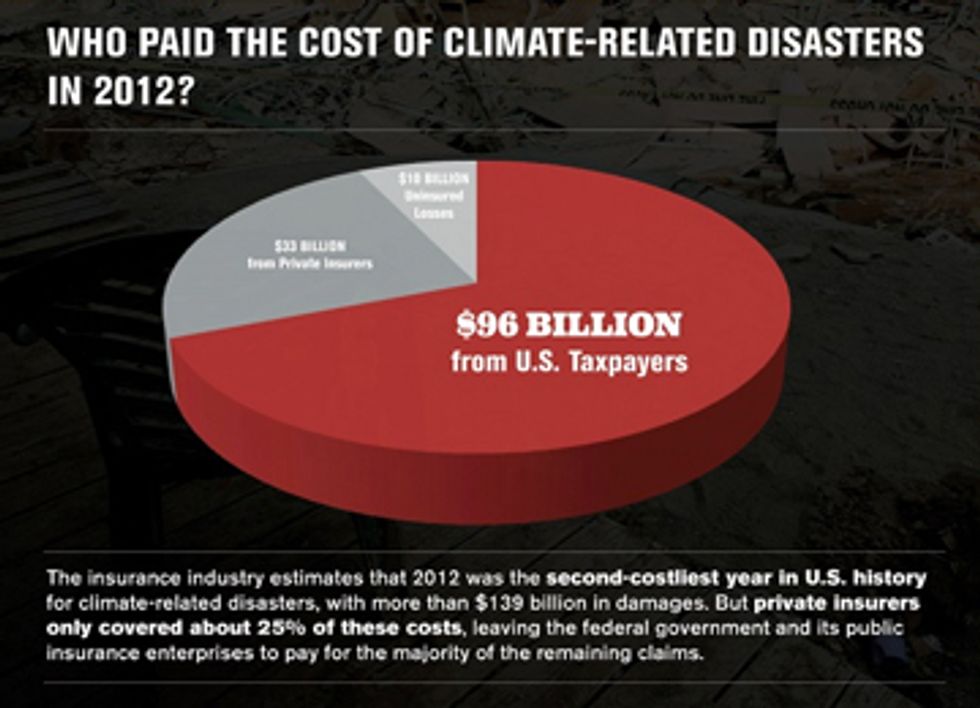 With all the debate on the federal budget in Congress, climate change rarely gets mentioned as a deficit driver. Yet dealing with climate disruption was one of the largest non-defense discretionary budget items in 2012. Indeed, as the Natural Resources Defense Council (NRDC) shows in Who Pays for Climate Change?, when all federal spending on last year’s droughts, storms, floods, and forest fires are added up, the U.S. Climate Disruption Budget was nearly $100 billion, equivalent to 16 percent of total non-defense discretionary spending in the federal budget—larger than any official spending category.

Overall the insurance industry estimates that 2012 was the second costliest year in U.S. history for climate-related disasters, with more than $139 billion in damages. But private insurers themselves only covered about 25 percent of these costs ($33 billion), leaving the federal government and its public insurance enterprises to pay for the majority of the remaining claims. As a result, the U.S. government paid more than three times as much as private insurers did for climate-related disasters in 2012.

That reflects a major shift in liabilities with respect to climate change away from private insurers to public alternatives that began in earnest following the $72 billion hit the industry took in 2005 from hurricane Katrina.

Spending related to storms includes appropriated funds for the Federal Emergency Management Agency as well as emergency supplemental appropriations following major disasters, such as Superstorm Sandy. It also includes the National Flood Insurance Program, which is supposed to be self-supporting, but is increasingly under water.

The figure below shows how the federal climate disruption budget breaks down.

While some of these federal programs—such as forest fire prevention, crop insurance, flood coverage and disaster preparedness—offer wider benefits to the country, it should be noted that these liabilities have largely been assumed by the public sector due to a lack of private sector alternatives. The true scorekeepers of climate risk—the insurance industry—realizes it can’t win when the dice are increasingly loaded with carbon pollution, so it’s walking away from the table, leaving taxpayers holding the bag. Last year that cost amounted to over $1100 per taxpayer, and we can expect to see even higher costs in future as carbon dioxide concentrations continue to soar past 400 parts per million.

Even as the budget to clean up climate disruptions hit a record high in 2012 and is expected to continue to grow, the budget for programs to fight climate disruption—such as environmental enforcement, energy efficiency, clean energy vehicle research and the Advanced Research Projects Agency-Energy—suffered cuts of more than $100 million the “sequester” that went into effect in March and remain under continued pressure from the budget-cutting process.

Our climate plan is, in effect, to cut critical investments now for the sake of small short-term deficit reductions and send our children the tax bills to clean up the mess.