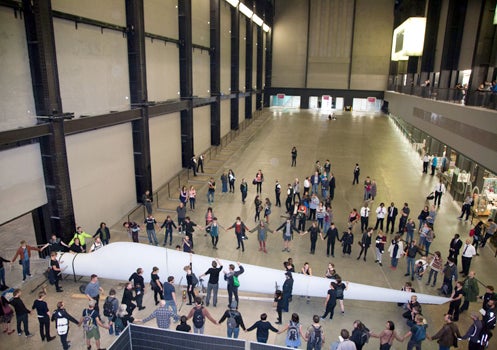 Sometimes the best things in life are so simple.

What better way to protest against the sponsorship of the arts by Big Oil than to undertake your own protest art installation?

And what is more fitting than a real wind turbine—a symbol of renewable energy—for the huge modern turbine hall of the Tate Modern in London.

For years, a loose collection of artists and activists have been protesting about BP’s sponsorship of the Arts in London, including at the Tate.

The wind turbine, which weighs one and a half tons, had been transported hundreds of miles after being decommissioned in Wales.

It was officially submitted to be part of Tate’s permanent collection, as a protest against BP’s ongoing sponsorship. Predictably, the Tate was having none of it and it was later removed by the Tate’s security staff.

The artwork, called The Gift, was installed by more than 100 members of the group that has become renowned for artworks aimed at ending the relationship between the Tate and Big Oil. 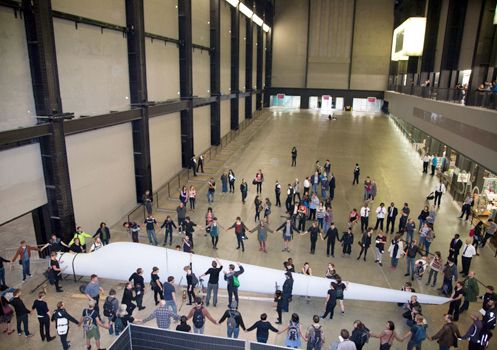 Sharon Palmer from Liberate Tate said: “For more than 20 years Tate has been used by BP to present an image of corporate benevolence while the oil company has been involved in environmental and human rights controversies the world over.”

She added: “Liberate Tate has created this artwork using an icon of renewable energy with an express wish that Tate will have the courage to take leadership in addressing the threat of catastrophic climate change and end its relationship with BP.”

Chris Sands, a participant in the performance, added that “the Tate is forcing climate-conscious gallery-goers into an uncomfortable position of complicity with BP, one of the most environment-destroying corporations on the planet.”

The reason activists are targeting BP is due to its catastrophic Gulf of Mexico spill, but also because it is expanding into the dirty tar sands in Canada.

Taking money off Big Oil is becoming a serious headache for the Tate. Earlier this year the Tate confirmed in a response to a Freedom of Information Act request that it has received more concerns about BP’s sponsorship than any other issue since the oil company became linked with the gallery in 1990.

Last December, 8,000 people signed an open letter to the head of the Tate, Nicholas Serota, about BP’s sponsorship. If you want to add your voice to them, click here.