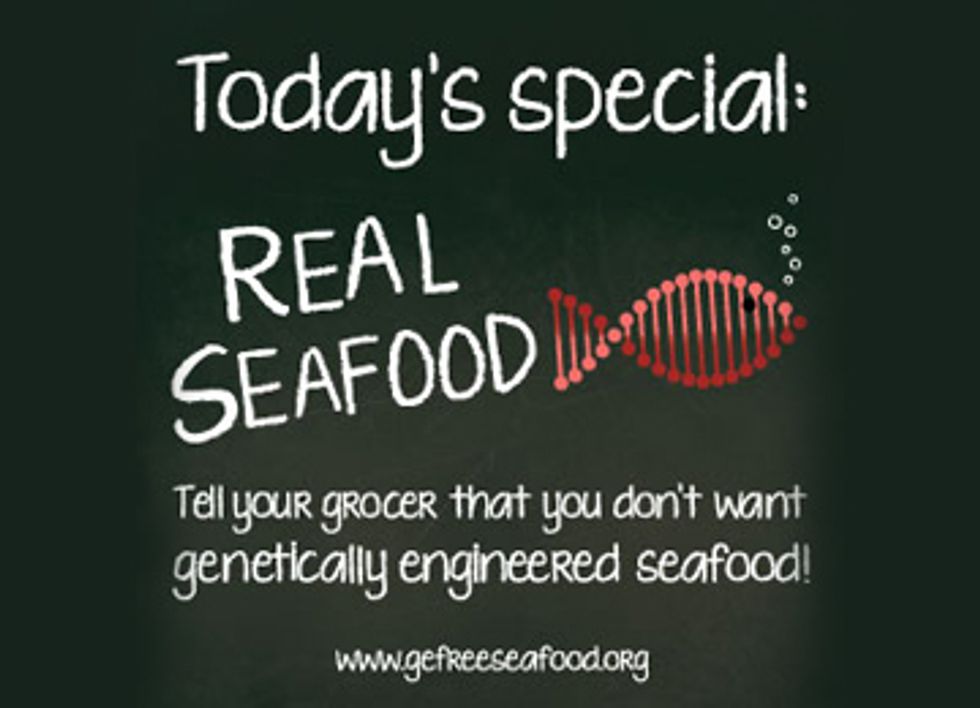 Today, the Campaign for GE-Free Seafood—a coalition of more than 30 consumer, health, food safety and fishing groups led by Friends of the Earth—announced that Target and other large mainstream grocery retailers across the U.S. have committed to not sell genetically engineered (GE) salmon if it is approved.

These new store policies were released today by Greenpeace in its Carting Away the Oceans report, which assesses the sustainable seafood policies of U.S. retailers.

Stores that will not sell GE salmon include Target, a national retailer that sells seafood in 1,394 stores; the H-E-B chain with 315 stores in Texas; Giant Eagle with 387 stores in Pennsylvania, Ohio, West Virginia and Maryland; and Meijer, with 200 stores in Michigan, Indiana and other states in the Rust Belt. These stores join 55 other food retailers that made similar commitments earlier this year, including Trader Joe’s, Aldi, Whole Foods, Marsh and Hy-Vee.

The total number of companies committed to not sell GE seafood now stands at 59 retailers representing 4,662 grocery stores across the country.

“There’s no room on our plates for genetically engineered seafood. Consumers don’t want it and price-competitive stores across middle America are refusing to sell it,” said Eric Hoffman, food and technology policy campaigner with Friends of the Earth. “We applaud Target and all these retailers for listening to the vast majority of their customers who want sustainable seafood for their families,” Hoffman said. "We need to see more big retailers take this kind of initiative. We're hoping that Safeway, which has become a real leader in seafood sustainability in other ways, and other major grocery stores turn the corner here and pledge to stay away from genetically engineered salmon."

The market rejection of genetically engineered fish comes as the Food and Drug Administration (FDA) conducts its final review of GE salmon. More than 1.8 million people submitted comments to the FDA opposing what would be the first-ever GE animal approved by regulators for the human food supply.

In related news, a new peer-reviewed study published in the Proceedings of the Royal Society, provides evidence that GE salmon can breed with wild trout and create offspring that grow even faster and can outcompete wild fish—increasing concerns about environmental damage.

“Simply put, this genetically engineered fish is a problem masquerading as a solution,” said Heather Whitehead, online campaigns director at Center for Food Safety. “It’s bad for the consumer, bad for the environment and bad for our native salmon. Since these fish will likely not be labeled, consumers have to rely on retailers like these to reject unwanted and unnecessary GE fish. We will continue to pressure other retailers to side with consumers.”

The FDA said it will likely not label GE salmon, providing consumers no way of knowing if the fish they are feeding their families is genetically engineered. At least 35 other species of GE fish are currently under development, and the FDA’s decision on this GE salmon application will set a precedent for other GE fish and animals (including cows, chickens and pigs) to enter the global food market.

To avoid confusion in the marketplace and ensure sustainable seafood, a coalition of more than 30 groups led by Friends of the Earth are asking grocery stores, seafood restaurants, chefs and seafood companies to join the Pledge for GE-Free Seafood and publicly commit to not knowingly purchase or sell GE salmon or other GE seafood.