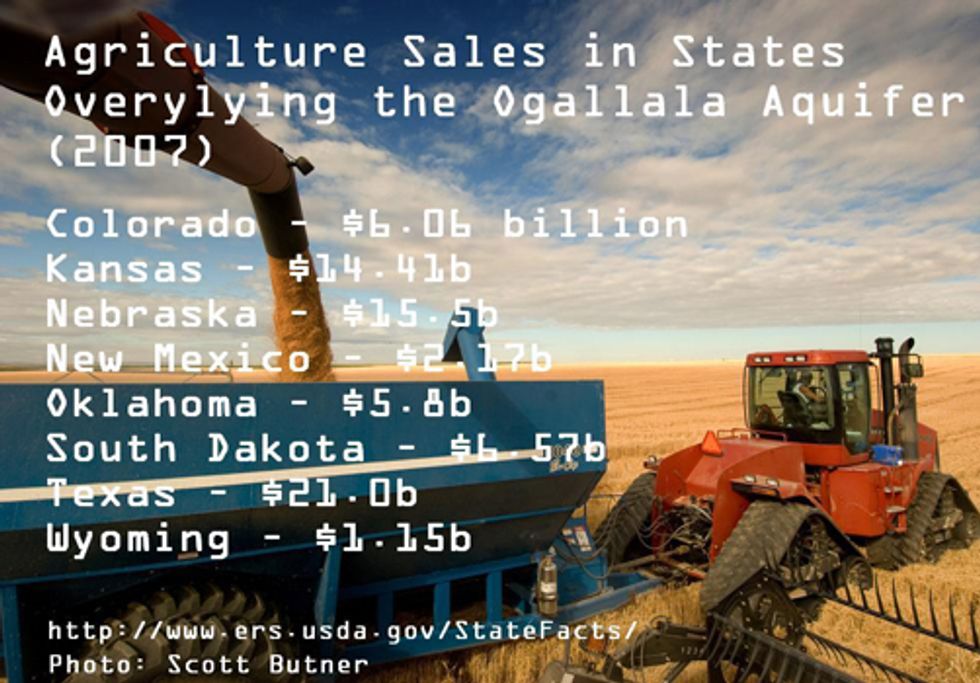 Until recently, pipeline safety wasn’t an issue that consumed a lot of oxygen on Capitol Hill. But the nationwide storm over the Keystone XL pipeline has thrust this subject front and center, with a tremendous amount riding on the outcome.

In its original application for a Presidential permit, TransCanada Corp. (the company behind the KXL pipeline) planned a route that would have cut through the sensitive Sandhills region of Nebraska. Fierce opposition from farmers, ranchers and citizens of every political stripe forced the company to scrap that idea, and now TransCanada is trying to identify a new route.

But though the oil industry was forced to make this concession to public health, a much vaster resource is still threatened—the Ogallala aquifer, which provides 30 percent of the water used for irrigation in the U.S., and drinking water for 2 million people. Almost any feasible pipeline route through Nebraska will still run over this aquifer.

It would be hard to overemphasize how vital the Ogallala is to our national economy. As Nebraska’s Republican Gov. Dave Heineman stressed in a letter to the White House, “This resource is the lifeblood of Nebraska’s agriculture industry.” The aquifer’s enormous stores of fresh water are the only reason the “Breadbasket of America” can exist—it irrigates farms that harvest nearly 20 percent of our wheat and cotton, and 15 percent of the U.S. corn—and makes possible a booming cattle industry across the plains states.

Oil spills happen all the time—a dirty secret that’s not so secret anymore, thanks to the scrutiny faced by the industry the last few years. And tar sands pipelines in particular have been in the news for all the wrong reasons—a 1.1 million gallon spill in Michigan’s Kalamazoo River; a 42,000 gallon spill in the pristine Yellowstone River in Montana; a 21,000 gallon eruption in North Dakota on TransCanada’s first Keystone 1 pipeline—which has been plagued by at least twelve spills since it was completed in 2010.

TransCanada is doing its best to hide these risks, even going so far as to manipulate data submitted to the U.S. State Department. An independent analysis by the University of Nebraska found that the worst-case spill scenarios were much higher than TransCanada’s estimates, with up to “91 major spills over a 50 year design life of the pipeline” and even the potential for benzene contamination of drinking water for hundreds of thousands of people. A study after the Kalamazoo spill found that nearly 60 percent of area residents experienced gastrointestinal, respiratory or neurological symptoms from exposure.

It’s obvious that tar sands pose an enormous risk to the Ogallala aquifer and the crops that feed Americans from coast to coast. Public polling on the issue reflects this concern—According to a Feb. 3 poll conducted by Hart Research Associates, 64 percent of voters think that the risk of a toxic oil spill in the Ogallala aquifer was a “very convincing” or “somewhat convincing” reason to block construction of Keystone XL. And after hearing pro and con arguments, a wide plurality of voters supported the White House’s decision to deny the permit (47 percent support, 36 percent oppose, and 17 percent undecided or no opinion).

Randy Thompson, a rancher whose land KXL would cut through, put it in plain terms—"Perhaps it’s just my Nebraska logic, but from my perspective it appears that the United States is getting the short end of the stick on this deal. Canada and the big oil companies are reaping the rewards while Americans are being left to fix the fence."

When you hear it like that, you realize that this debate boils down to a pretty simple question—Do we decide to protect Americans’ food supply and drinking water, or pad the profits of foreign oil companies that want to cut through our farmland on the way to overseas markets? It should be an easy choice.