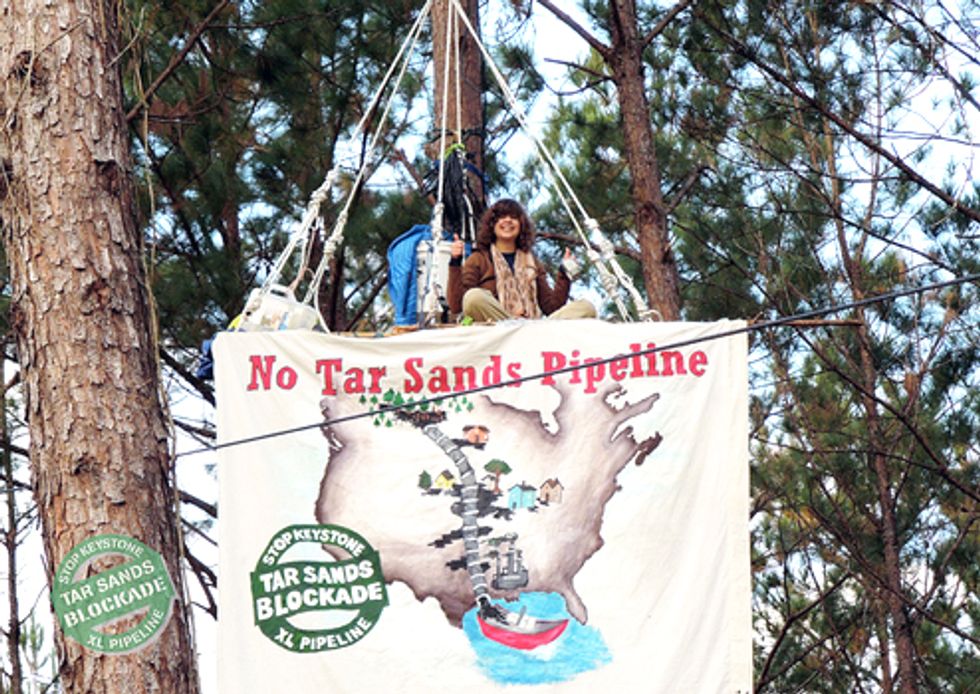 A few weeks ago I was arrested for locking myself to Keystone XL heavy machinery and helping stop construction for most of the day. I had never done direct action before, but at Tar Sands Blockade’s last Mass Action and Training Camp, I got the skills and legal knowledge to take action. I invite you to join our next Mass Action and Training Camp in Southeast Texas, Jan. 3 to Jan. 8.

You don’t have to risk arrest—there are plenty of equally vital roles for everyone. Whether you’re an experienced activist or you’ve never participated in direct action before, come get the skills and take action to stop the Keystone XL!

I had long been searching for a sense of efficacy, a way to feel like I was actively resisting the desecration of my environment rather than just sitting on the sidelines and watching the world fall apart—and I finally found it at Tar Sands Blockade’s Mass Action. Afterward, I joined the campaign full-time and now I’m helping to organize the next Mass Action and Training Camp to empower more people to make a difference.

The best part of the action was that it wasn’t just me—I was joined by 120 other people, many of whom were local community members defending their homes from toxic tar sands. Even when I was in jail, I never felt alone. I knew I was being supported by a loving community of tireless, dedicated activists. If I learned anything, it is that together, we can stop this pipeline.

Our campaign began with a tree-sit, and since then we’ve consistently employed new and innovative tactics to escalate the campaign, whether that means hunger strikes in Houston to get Valero to divest from the Keystone XL and stop poisoning the residents of Manchester, or blockading the pipe itself to halt construction.

January’s Mass Action and Training will be no exception—it’s going to be unlike anything we’ve done before, and with your help we can make it a truly massive and overwhelming disruption of TransCanada’s ability to steal our land, poison our water and destabilize our climate.

Whether you’ve done direct action before or not, and can risk arrest like me, there are roles for everyone ready to help defend our homes from toxic tar sands.