Why You Should Never Drink Bottled Water Again 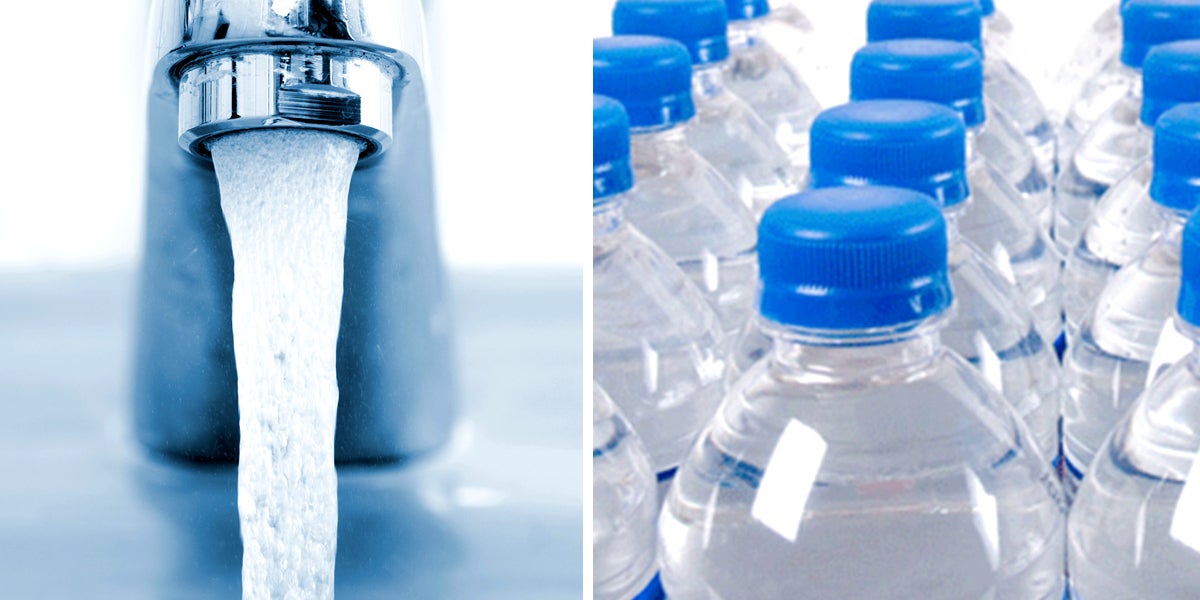 As the poet W.H. Auden put it, “Thousands have lived without love, not one without water.”

One of the main reasons water is so critical to life processes is that it is the ideal vehicle for transporting critical substances in and out of living cells. “The way they’re bonded together makes water this wonderful universal solvent,” which means that almost every substance can dissolve in water, said Brian Glazer, an oceanographer at the University of Hawaii at Manoa. From regulating body temperature, transferring nutrients into cells and energizing muscles, controlling calorie intake, lubricating joints and flushing waste from the body, water is essential to life.

How much water should you drink every day? According to the Institute of Medicine, healthy adult men should have about 13 cups (3 liters) of total beverages each day and healthy adult women about 9 cups (2.2 liters). Their recommendation isn’t too far off the popular rule of eight glasses a day, which is about 1.9 liters.

Bottled water manufacturers would like us to believe that bottled water is safer than tap water because it goes through a filtration process, which improves the color, taste and smell, and eliminates specific contaminants. However, bottled water is not required to be 100-percent contaminant-free.

“Tap water and bottled water are generally comparable in terms of safety,” notes Katherine Zeratsky, a licensed dietician with the Mayo Clinic. “So the choice of tap or bottled is mostly a matter of personal preference.”

Zeratsky adds that the U.S. Food and Drug Administration, which oversees bottled water, and the U.S. Environmental Protection Agency (EPA), which regulates tap water “use similar standards for ensuring safety.”

The EPA mandates that water utilities that serve your home’s tap water provide annual quality reports that include information about levels of contamination and potential health effects. The agency also sets regulatory limits on certain waterborne contaminants provided by public water systems. (The EPA does not regulate well water, so if your water supply comes from a private well, you should get it tested regularly.)

Tap water is also treated with chlorine, a disinfectant that kills harmful bacteria and some viruses, while also protecting the water from recontamination when it’s stored for later use. The EPA mandates that chlorine levels in drinking water should be no higher than 4 milligrams per liter.

In addition, the EPA mandates that fluoride is added to public water (also at the level of 4 milligrams per liter), to help prevent dental disease, specifically cavities. There is a strong consensus in the international medical community that water fluoridation is a good idea. The EPA says fluoridation also provides some protection against skeletal fluorosis, a painful joint condition.

Thanks to the mandate given the EPA by the Safe Drinking Water Act of 1974, public tap water is safe. Of course, there are instances, like the water crisis in Flint, Michigan, in which this is not the case. But generally speaking, the argument that bottled water is safer than tap water based on the filtration process simply doesn’t hold water.

In fact, the negative health impact appears to be more with plastic bottles than with tap. A 2006 Canadian study found that plastic bottles leach chemicals into the water they contain. The researchers found that the longer the water sits inside the bottle, the higher the concentration of certain chemicals, like antimony, a metallic element that can cause dizziness, nausea and even depression. “If you bottle water in Europe and ship it to Asia, what is the antimony concentration in that water by the time somebody buys that water and drinks it?” said the study’s lead author William Shotyk, director of the Institute of Environmental Geochemistry at the University of Heidelberg in Germany.

“Bottlers of water generally capitalize on consumer concerns about municipal water supplies, creating demand for their product via an association with pristine environs,” writes Mark Baumgartner of ABC News. But according to a report commission by World Wildlife Fund International, the only real difference for some bottled waters (antimony contamination notwithstanding) is that they distribute water through plastic bottles instead of pipes. In fact, more than 25 percent of bottled water is simply tap water that a company has filtered and packaged in a bottle.

“There are more standards regulating tap water in Europe and the United States than those applied to the bottled water industry,” according to WWF. In addition to saving money, turning to tap water over bottled water also helps the environment, as every year, some 1.5 million tons of plastic are used to manufacture all those bottles, noted Biksham Gujja, head of WWF International’s Fresh Water Program. Plastic production and plastic waste disposal produce carbon emissions and releases toxic chemicals.

Plastic is made from either petroleum, or more likely in the United States, natural gas. The extraction of these fossil fuels releases a toxic stew of air pollutants, greenhouse gases and known carcinogens, including benzene, toluene, ethylbenzene, xylene, carbon monoxide, hydrogen sulfide, methane, nitrogen oxide and sulfur dioxide. (The nonprofit environmental group Earthworks compiled a list explaining these and other contaminants associated with oil and gas production.)

Another main concern of plastic water bottles is the fact that many people do not actually recycle their bottles, which can take up to 450 years to decompose, further releasing contaminants into the soil, water and air. But even though they degrade, plastic bottles don’t disappear altogether. “All remain as plastic polymers and eventually yield individual molecules of plastic too tough for any organism to digest,” said Genevieve Johnson, education director and marine coordinator of the Voyage of the Odyssey, a five-year program launched in 2000 by the oceanographic research nonprofit Ocean Alliance to gather the first-ever data on synthetic contaminants in the world’s oceans.

Johnson knows firsthand that countless plastic bottles end up polluting the world’s oceans and waterways, killing a wide variety of animals, from fish and birds to marine mammals like dolphins and whales, all of whom inadvertently consume our plastic waste. The U.S. recycling rate for plastic is just 23 percent, meaning that only about one in every four or five bottles finds another use. The rest pollute the environment and kill wildlife.

The bottled water industry is also a water waster. In 2013, the International Bottled Water Association, an industry trade group, commissioned the first-ever study to determine how much water is required to produce one liter of bottled water. It found that North American water bottling firms use 1.39 liters to make one liter of water. But even that number isn’t the true amount, as it doesn’t include all the water use across the full supply chain.

For example, says Ertug Ercin of the nonprofit Water Footprint Network, a significant amount of groundwater is used in drilling for the fossil fuel to make the plastic. He suggests that, when you add up all the water that goes into the packaging, a half-liter bottle might require three liters of water to produce. And there is another environmental cost beyond producing and disposing plastic water bottles, and that’s transporting and keeping them cold, which also increases the climate footprint of bottled water.

It’s hard to overlook the convenience factor of bottled water, particularly when you’re thirsty and on the go. But a little forethought can go a long way, especially considering the many options of portable and reusable bottles, which are better for the environment and your pocketbook.

Some people argue that bottled water just tastes better. But that, it turns out, is just a perception. The nonprofit group Ban the Bottle found that “countless” taste tests conducted by Corporate Accountability International’s Think Outside the Bottle campaign and various media outlets showed people could not tell the difference between the two:

Ultimately, however, the point isn’t whether one tastes better than the other—it’s how our tastes are shaped by advertising, rather than by what’s good for us. Between 10 and 15 percent of the price of a bottle of water goes to cover advertising costs. We not only buy their myths, it turns out we pay extra for them.

In the final analysis, tap water is cheaper, tastes better, is significantly better for the environment and just as safe or even safer than bottled water. We’ll drink to that.

Nathaniel Berman is the co-founder and editor-in-chief of BC Media Group and an editor at Housely. Find him on Twitter @Nathanielberman.