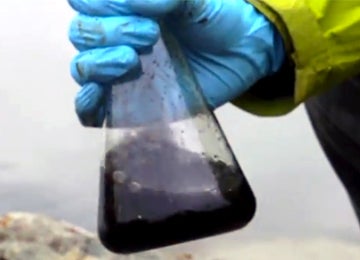 Today, the Sierra Club and its partners filed suit against Burlington Northern Santa Fe Railway Company (BNSF) and several coal companies for violations of the federal Clean Water Act. The Sierra Club, Puget Soundkeeper, Columbia Riverkeeper, RE Sources for Sustainable Communities and Friends of the Columbia Gorge sent a 60 day notice in April after collecting evidence demonstrating the companies’ responsibility for emitting coal into waterways in several locations across Washington. Spokane Riverkeeper and the Natural Resources Defense Council (NRDC) recently sent a notice letter for these violations as well.

“BNSF and the other coal shippers had two months to figure out a way to stop polluting our waterways and communities with coal dust but they chose to do nothing to find a solution,” said Cesia Kearns, senior campaign representative of the Sierra Club’s Beyond Coal Exports campaign. “After years of railroad and coal companies playing the coal dust blame game, the last two months proved we can only expect more of the same from these companies. ”

The suit was filed in U.S. District Court for the Western District of Washington in Seattle, where coal dust has been identified in and along multiple waterways. Seattle Mayor Mike McGinn, a co-founder of the Leadership Alliance Against Coal comprised of over 40 Northwest tribal and elected leaders, has actively opposed the plan to develop coal export terminals in Washington and Oregon which would send 18 coal trains per day through Seattle, and is now speaking out against the Clean Water Act violations.

“We are concerned about the effects of coal dust on our environment and on our waterways,” said Seattle Mayor Mike McGinn. “It is important that the coal companies comply with our environmental laws.”

According to BNSF testimony at hearings before the Surface Transportation Board, each rail car loses an average of 500-3,500 pounds of coal dust. Coal trains are composed of approximately 120 rail cars, resulting in an average of 60,000-420,000 lbs of coal lost per train, each trip. A massive increase in rail traffic and longer trains are expected in the future should new hotly contested coal export terminals be built in Washington and Oregon.

BNSF Railway, owned by Warren Buffett’s Berkshire Hathaway, is one of the largest coal transporters in the U.S. It is responsible for hauling an average of four trains, or 480 open-top rail cars, carrying coal through Washington daily. BNSF ships nearly 300 million tons of coal through 28 states each year, coming in contact with countless waterways every trip.

“If we’re seeing this much coal from just a few trains in Washington every day, it begs the question of what problems other waterways in states across the country might also be facing,” said Bart Mihailovich, Spokane Riverkeeper.

According to BNSF, approximately 90 percent of its annual coal shipments are from coal mines in the Powder River Basin (PRB) located in Wyoming and Montana. PRB coal breaks apart easily and contains mercury, arsenic, uranium and hundreds of other toxins harmful to fish and human health.

Clyde Anderson, a retired Union Pacific employee from Omaha, NE, spent decades working on the rail line and says even after a coal train has traveled nearly 800 miles from the West, coal dust is still a major problem. “Sometimes the coal dust was so bad, the visibility of the caboose was completely blocked,” said Anderson.

Using the most conservative BNSF figures, the four daily coal trains travelling through Washington heading to Canada or to the state’s last remaining coal plant combine to lose a staggering 240,000 pounds of coal dust per day. Local residents and conservation groups are concerned that the problem will only worsen if coal companies receive approval to move forward with their controversial plans to develop at least three coal export terminals in Washington and Oregon, which could send an additional 42 trains through Washington daily.

“With proposals to dramatically increase coal train traffic in the Gorge currently looming, it is even more important that we end these dangerous violations of the Clean Water Act and stop dumping coal in the Columbia River Gorge, our National Scenic Treasure,” said Michael Lang, conservation director for Friends of the Columbia Gorge.

Under the Clean Water Act, anyone discharging pollutants into U.S. waters must first obtain what is known as a National Pollutant Discharge Elimination System permit. BNSF does not have such a permit.

Plaintiffs intend to file a similar action in the Eastern District of Washington at a later date.

The plaintiffs are represented by the Law Offices of Charles M. Tebbutt, P.C. of Eugene, OR, Andrea Rodgers Harris of Seattle, WA, Jessica Yarnall Loarie of the Sierra Club Law Program, and David Pettit and Morgan Wyenn of the Natural Resources Defense Council.