Take a Virtual Tour of the World’s Largest Treehouse 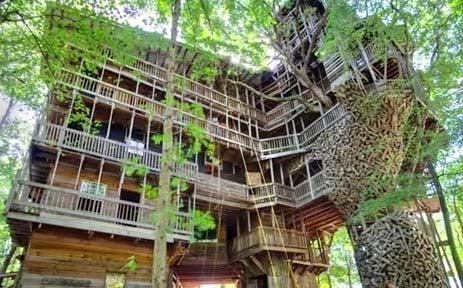 “This has to be the most epic treehouse I have ever seen,” says the Seeker Stories narrator in the video below. “Four stories high, surreal architecture and an amazing tree swing. There’s even a tree growing out of the third floor and what looks like a penthouse suite on top.”

Geographer and photographer Chuck Sutherland says it’s, “arguably the world’s largest treehouse.” The 97-foot-tall structure is located in Crossville, Tennessee, and it’s supported by six different trees. It was built by a minister, Horace Burgess, who says he was commanded by God to build it. The structure contains 80 rooms and even has a basketball hoop, church and bell tower. Construction lasted 14 years with the minister spending $12,000 to build it. It’s become quite a legend in recent years. People flocked from all over to tour the building, but it was closed by a fire marshall in 2012 for violating fire codes. Still, there’s a petition circulating to have it reopened.

For now, you’ll have to take a virtual tour of this strange yet awesome building:

Treehouse living is really coming into its own these days. Earlier this year, we reported on a man who built the coolest of tiny treehouses on an island in British Columbia. You can take a virtual tour of that house as well. And then there’s the five-story treehouse smack dab in the middle of Turin, Italy. The architect of that magical-looking place claims that the abundant foliage sucks in 200,000 liters of carbon dioxide an hour, a welcome reprieve from the city’s notorious pollution.

If You’ve Ever Wanted to Live in a Treehouse, You’ve Got to Check This Out