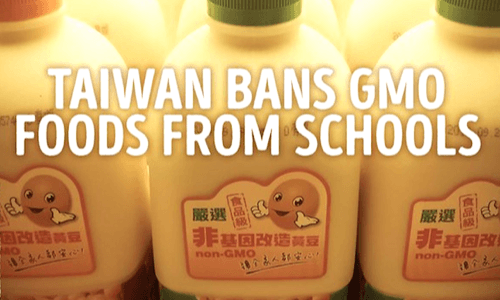 Another country is taking action on genetically modified organisms (GMOs). Taiwan has banned schools across the nation from serving GMOs to students, citing health and safety concerns.

https://twitter.com/Cornucopia_Inst/status/685978141286875138. The FDA of the United States, by comparison, allows tens of thousands of chemicals to be used as additives, even when they are well known to cause cancer.

3. All GMO ingredients are required to be registered with the Taiwan government, and food manufacturers that use GMOs are required to establish an origins tracking system to identify where those GMOs originated.

4. All the soy milk, tofu, miso and other soy-derived products sold everywhere across the country—including at cafes and street food vendors—must be clearly labeled as GMOs if they use genetically modified soy.

5. Food products made using genetically modified soy as a processing agent or blended ingredient must also label their final food products as GMO, even if the soybean oil is not, itself, the final product.

6. Fines for violating these food safety provisions have been set at NT$50 million (about US$1.5 million).

Last November, Taiwan banned the import of GMO salmon from the U.S. shortly after it was approved by the U.S. FDA.