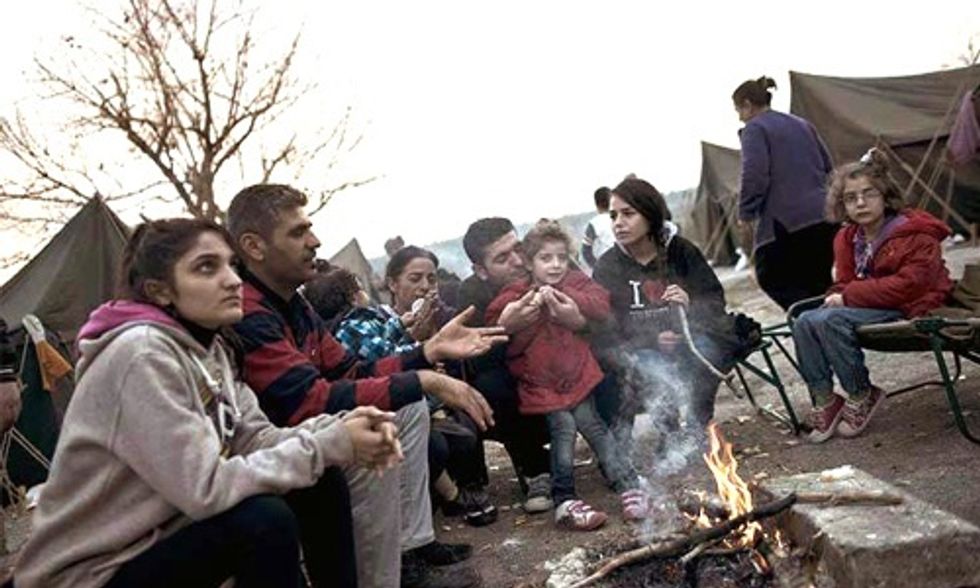 People move for many reasons: work, school, family, to seek out the bright lights of the big city or to escape them. But as temperatures rise and global warming continues to manifest itself in rising seas, coastal erosion and more severe droughts, floods and storms, climate change is becoming increasingly intertwined in the reasoning behind why people pick up and leave.

Syrian refugees at a camp in Bulgaria. Photo credit: UNHCR

Some head to higher ground within their own country; others try their luck in new lands. In Alaska, it’s the former. As temperatures there have risen twice as fast as the global average over the past half century, native coastal communities established decades ago on permafrost—a once permanently frozen layer of subsoil—are washing away as the land beneath them thaws and erodes into the sea. President Obama visited one of these towns, Kotzebue, earlier this month. For several areas, relocation is the only option remaining to protect residents as the ground beneath their homes crumbles. “This is a true example of running down the clock,” says Danielle Baussan, the Center for American Progress’ managing director of energy policy, who has looked into domestic impacts of climate displacement. “Some of these communities are predicted to be underwater by 2017.”

The motivation behind the moves in Alaska is pretty clear-cut. More often than not, however, connecting the dots between climate change and human migration is a far murkier endeavor. While global warming can magnify the impacts of extreme weather events, a wide variety of non-environmental factors determine whether people choose to move and where they choose to go following a disaster.

“Disaster displacement is multi-causal,” says Marine Franck, a climate change consultant for the United Nations High Commission for Refugees. “Climate change is an important factor but not the only factor.” As the Migration Policy Institute elaborates in an article examining the complexities of climate change and migration, a weather-related event—whether it’s gradual glacial melting or a sudden superstorm like Sandy—can increase pressures on land, food and water resources. This can subsequently “contribute to existing problems—including food insecurity, malnutrition, poverty, the spread of disease, rapid urbanization and political instability—in areas of the world that already struggle with some of these issues.” In other words, one of global warming’s greatest strengths is how it can make an already strained region more unstable.

Social, political, economic and sectarian strife—combined with more personal issues like family and community ties, as well as financial well-being—influence the choice to start over elsewhere. Climate matters may not be as visible a factor in these decisions, but they certainly play a part.

Consider Syria. You could think of a lot of reasons why someone wouldn’t want to live there right now—ISIS invasions being just one of them. Since the country’s violent upheaval began in 2011, 4.1 million people have sought safety abroad and another 6.5 million are displaced within Syria’s borders. But climate change is hardly an innocent bystander. As a study found earlier this year, Syria and the rest of the region known as the Fertile Crescent underwent the worst drought in modern times between 2007 and 2010—on the eve of the revolution. Periodic dry spells in this area aren’t uncommon, but the researchers conclude that such a severe drought was two to three times more likely to occur under the effects of climate change than in its absence. Additionally, evidence shows that this drought was part of a larger regional warming and drying trend—one that doesn’t correspond to natural climate variability but does to the global rise in greenhouse gases. Climatologist and lead author Colin Kelley notes in an article he cowrote for the International Peace Institute, “three of the four most severe multiyear droughts in Syria’s observed record occurred during the last 30 years, when the rate of global carbon emissions has seen its largest increase.”

The three-year Syrian drought had a catalytic effect, contributing to existing water and agricultural insecurity and causing widespread crop failures and livestock death. As a consequence, approximately 1.5 million people left their homes in rural farming areas for major cities like Damascus, Aleppo and Dara’a. Combined with natural population growth, the country’s cities were already experiencing an influx of refugees from neighboring war-torn Iraq. In just eight years, the urban population rose by 50 percent, placing an untenable burden on resources and adding to social stresses, such as inadequate infrastructure and services, overcrowding and unemployment. To put it mildly, Syria’s president, Bashar al-Assad, was neglectful in remedying these issues. Following month of protests, the first uprisings began in March 2011.

Climate change didn’t cause the Syrian civil war or today’s refugee crisis. The country was already facing incredible challenges—from a dictatorship to unsustainable land use practices to economic mismanagement—but a severe drought, made worse by climate change, was almost certainly a factor in pushing people over the brink.

As the planet warms, such climate stressors could happen anywhere. According to the Internal Displacement Monitoring Centre, historical models suggest that the likelihood of being displaced by a disaster today is 60 percent higher than it was four decades ago—and the largest increases in displacement are related to weather- and climate-related hazards. Looking ahead, the report notes, “Climate change, in tandem with people’s increasing exposure and vulnerability, is expected to magnify this trend, as extreme weather events become more frequent and intense in the coming decades.”

In its 2014 fifth assessment report, the Intergovernmental Panel on Climate Change (which posited as far back as 1990 that “the gravest effects of climate change may be those on human migration”) agrees, saying that climate change will likely increase migration, especially from poorer parts of the world. Areas of sub-Saharan Africa, the Middle East and South and Southeast Asia could be particularly vulnerable, as are atoll nations in the Indian and Pacific oceans.

World leaders are taking note. “You think migration is a challenge in Europe today because of extremism,” said Secretary of State John Kerry at a conference in August on climate change in the Arctic. “Wait until you see what happens when there’s an absence of water, an absence of food or one tribe fighting against another for mere survival.”

In the same vein, at a meeting of defense ministers in Peru last year, Defense Secretary Chuck Hagel said, “The loss of glaciers will strain water supplies in several areas of our hemisphere. Destruction and devastation from hurricanes can sow the seeds for instability. Droughts and crop failures can leave millions of people without any lifeline and trigger waves of mass migration.”

During his State of the Union address on Sept. 9, European Commission President Jean-Claude Juncker urged E.U. nations to push for an “ambitious, robust and binding” climate deal at the upcoming World Climate Summit in Paris, warning that settling for anything less could result in the next migration crisis. “Tomorrow morning we will have climate refugees,” he said. “We need to act now, because we don’t have time to lose.”

A few days earlier, French President François Hollande, sounded a similar alarm. “If we don’t conclude [with a successful climate agreement] … it won’t be hundreds of thousands of refugees in the next 20 years, it will be millions.”