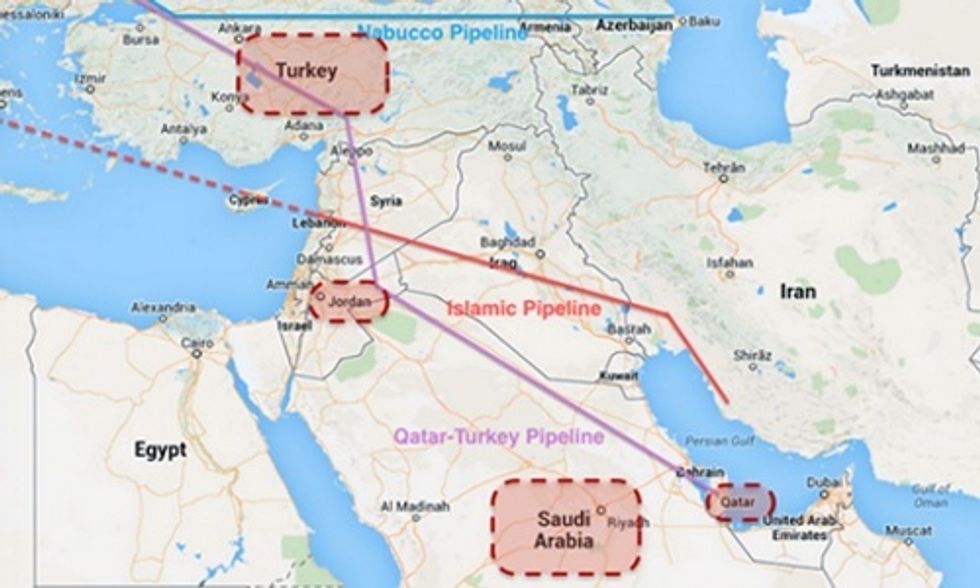 In their view, our war against Bashar Assad did not begin with the peaceful civil protests of the Arab Spring in 2011. Instead it began in 2000 when Qatar proposed to construct a $10 billion, 1,500km pipeline through Saudi Arabia, Jordan, Syria and Turkey.

Note the purple line which traces the proposed Qatar-Turkey natural gas pipeline and note that all of the countries highlighted in red are part of a new coalition hastily put together after Turkey finally (in exchange for NATO's acquiescence on Erdogan's politically-motivated war with the PKK) agreed to allow the US to fly combat missions against ISIS targets from Incirlik. Now note which country along the purple line is not highlighted in red. That's because Bashar al-Assad didn't support the pipeline and now we're seeing what happens when you're a Mid-East strongman and you decide not to support something the US and Saudi Arabia want to get done. (Map: ZeroHedge.com via MintPress News)

Qatar shares with Iran, the South Pars/North Dome gas field, the world's richest natural gas repository. The international trade embargo, until recently, prohibited Iran from selling gas abroad and ensured that Qatar's gas could only reach European markets if it is liquefied and shipped by sea, a route that restricts volume and dramatically raises costs.

The proposed pipeline would have linked Qatar directly to European energy markets via distribution terminals in Turkey which would pocket rich transit fees. The Qatar/Turkey pipeline would have given the Sunni Kingdoms of the Persian Gulf decisive domination of world natural gas markets and strengthen Qatar, America's closest ally in the Arab world. Qatar hosts two massive American military bases and the U.S. Central Command's Mid-East headquarters.

The EU, which gets 30 percent of its gas from Russia, was equally hungry for the pipeline which would have given its members cheap energy and relief from Vladimir Putin's stifling economic and political leverage. Turkey, Russia's second largest gas customer, was particularly anxious to end its reliance on its ancient rival and to position itself as the lucrative transect hub for Asian fuels to EU markets. The Qatari pipeline would have benefited Saudi Arabia's conservative Sunni Monarchy by giving them a foothold in Shia dominated Syria.

The Saudi's geopolitical goal is to contain the economic and political power of the Kingdom's principal rival, Iran, a Shiite state, and close ally of Bashar Assad. The Saudi monarchy viewed the U.S. sponsored Shia takeover in Iraq as a demotion to its regional power and was already engaged in a proxy war against Tehran in Yemen, highlighted by the Saudi genocide against the Iranian backed Houthi tribe.

Of course, the Russians, who sell 70 percent of their gas exports to Europe, viewed the Qatar/Turkey pipeline as an existential threat. In Putin's view, the Qatar pipeline is a NATO plot to change the status quo, deprive Russia of its only foothold in the Middle East, strangle the Russian economy and end Russian leverage in the European energy market. In 2009, Assad announced that he would refuse to sign the agreement to allow the pipeline to run through Syria “to protect the interests of our Russian ally."

Assad further enraged the Gulf's Sunni monarchs by endorsing a Russian approved “Islamic pipeline" running from Iran's side of the gas field through Syria and to the ports of Lebanon. The Islamic pipeline would make Shia Iran instead of Sunni Qatar, the principal supplier to the European energy market and dramatically increase Tehran's influence in the Mid-East and the world. Israel also was understandably determined to derail the Islamic pipeline which would enrich Iran and Syria and presumably strengthen their proxies, Hezbollah and Hamas.

Secret cables and reports by the U.S., Saudi and Israeli intelligence agencies indicate that the moment Assad rejected the Qatari pipeline, military and intelligence planners quickly arrived at the consensus that fomenting a Sunni uprising in Syria to overthrow the uncooperative Bashar Assad was a feasible path to achieving the shared objective of completing the Qatar/Turkey gas link. In 2009, according to WikiLeaks, soon after Bashar Assad rejected the Qatar pipeline, the CIA began funding opposition groups in Syria.

Bashar Assad's family is Alawite, a Muslim sect widely perceived as aligned with the Shia camp. “Bashar Assad was never supposed to be president," says journalist Sy Hersh. “His father brought him back from medical school in London when his elder brother, the heir apparent, was killed in a car crash."

The Nation
Politics
A protestor in NYC holds up a sign that reads, "November Is Coming" on June 14, 2020 in reference to voting in the 2020 presidential election. Ira L. Black / Corbis / Getty Images

What follows are not candidate endorsements. Rather, this nonpartisan guide aims to inform voters' choices, help journalists decide what races to follow, and explore what the 2020 elections could portend for climate action in the United States in 2021 and beyond.

The wildfires that ignited in the Arctic this year started earlier and emitted more carbon dioxide than ever before.

Mongabay
Animals
A metapopulation project in South Africa has almost doubled the population of cheetahs in less than nine years. Ken Blum / Wikimedia Commons / CC by 3.0

South Africa is home to around 1,300 of the world's roughly 7,100 remaining cheetahs. It's also the only country in the world with significant cheetah population growth, thanks largely to a nongovernmental conservation project that depends on careful and intensive human management of small, fenced-in cheetah populations. Because most of the reserves are privately funded and properly fenced, the animals benefit from higher levels of security than in the increasingly thinly funded state reserves.

Jordan Davidson
Science
A new super enzyme feeds on the type of plastic that water and soda bottles are made of, polyethylene terephthalate (PET). zoff-photo / iStock / Getty Images Plus

Scientists are on the brink of scaling up an enzyme that devours plastic. In the latest breakthrough, the enzyme degraded plastic bottles six times faster than previous research achieved, as The Guardian reported.