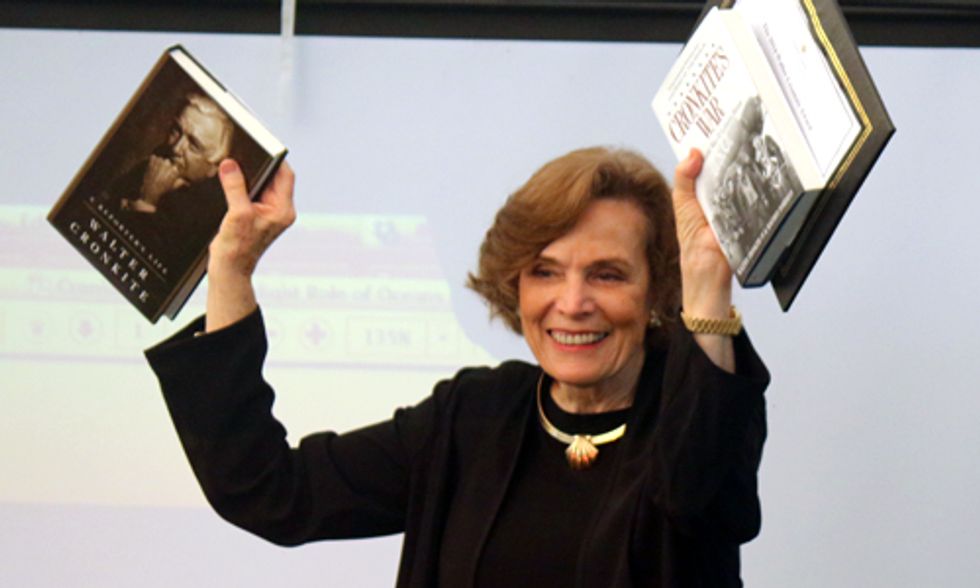 What do Walter Cronkite, Sylvia Earle and Sam Low all have in common? They have mastered the might of media on behalf of the sea.

2014 Walter Cronkite Award recipient Dr. Sylvia A. Earle is a world-famous ocean pioneer and former chief scientist at the National Oceanic and Atmospheric Administration who has spent her life exploring the world’s oceans and sharing her boundless curiosity for what lies beneath the surface of sea—once a glass ceiling for women scientists. Photo credit: Martha Shaw

The 2014 Walter Cronkite Award was bestowed on ocean all-stars Dr. Sylvia Earle and Dr. Sam Low by the MVYLI, Martha's Vineyard Youth Leadership Initiative, which honors people who create positive social change in the world through the power of media.

Like the award recipients, Walter Cronkite was a champion for the 71 percent of Earth’s surface that is the sea—our omnipotent, astonishing, complex, generous and sorely neglected neighbor who rules our planet and keeps us terrestrials alive. Since the industrial revolution, the ocean has been polluted, and literally put through the meat grinder as never before in its 4 billion year history. Walter stirred the hearts of people, young and old, to take an interest not only in the beauty and bounty of our ocean, but in its health and future. The Walter Cronkite Award recognizes leaders who provide this level of inspiration to today’s youth.

Award recipient Dr. Sylvia A. Earle is a world-famous ocean pioneer and former chief scientist at the National Oceanic and Atmospheric Administration (NOAA) who has spent her life exploring the world’s oceans and sharing her boundless curiosity for what lies beneath the surface of sea—once a glass ceiling for women scientists. In 2009, she formed Mission Blue as a collaborative platform to ignite public support for a global network of marine protected areas large enough to save and restore the “blue heart” of the planet, known as Hope Spots.

“We are at the sweet spot of human history,” said Dr. Earle. “More has been learned about the ocean in the last decade than throughout all of human history. For the first time, we have access to information about our ocean as never before. Now we can actually do something. What will we do with this new knowledge? As a new generation that knows more than anyone has ever known before, what will you do with your future?”

“Walter Cronkite epitomized the spirit of what went up (to space) and what went down (to sea) and as a young scientist that inspired me,” said Earle. “I see his presence is still alive and well on Martha’s Vineyard. I am honored to be receiving this award with Sam Low, who has offered such a boatload of information about the ocean to all of us. I bow low, to Sam Low.”

The co-recipient was Dr. Sam Low, an anthropologist and award-winning storyteller dedicated to island people in their quest to raise awareness of our planet’s fragility, of which islands are most vulnerable. His film, The Navigators—Pathfinders of the Pacific, and recent book, Hawaiki Rising—Hokule’a Nanoa Thompson and the Hawaiian Renaissance, tell the story of the Polynesian settlement of the Pacific and ancient mariners who use native intelligence and natural signs to navigate our ocean. Low has both Vineyard and Hawaiian roots, and will join a global voyage in an ancient Polynesian canoe with the Polynesian Voyagers Society to share and celebrate the ancient wisdom of the sea.

Following the awards presentation, young leaders from MVYLI remarked on how the ocean was bringing everyone together, particularly island people, and shared their ideas for creating a more sustainable blue planet.

At sundown, the Martha’s Vineyard Film Festival set up a big screen on Menemsha Beach to premiere Mission Blue, the remarkable and breathtakingly beautiful documentary about Dr. Sylvia Earle’s life. The film was directed by Vineyard filmmaker Bob Nixon, and Fisher Stevens, who followed Earle with their crew around the world ocean for more than five years. Island residents and summer visitors laid blankets on the sand to be among the first to see the film, before it goes up on NetFlix on Aug. 15.

Native Vineyard fisherman and advocate for sustainable fisheries, Buddy Vanderhoop, shared his admiration for the mission of Dr. Earle and his support for marine protected areas to allow the depleting local fish population to spawn and populate again, and to prevent massive fish factory ships from destroying what is left. Dr. Earle promised to return to Martha’s Vineyard and work together toward this, in light of NOAA’s recent invitation to communities across the nation to nominate national marine sanctuaries.