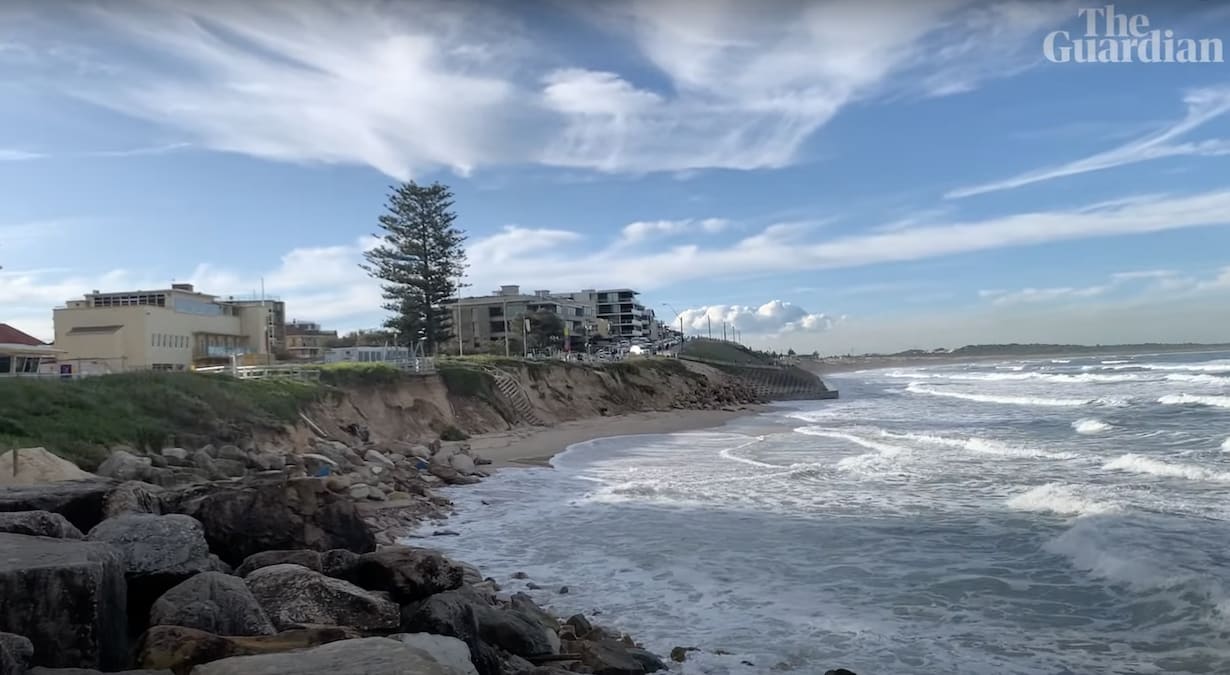 The extreme weather that has inundated the Sydney, Australia area with rain and flooding this summer has also taken a toll on the region’s beaches.

The lifeguard tower at North Cronulla beach even had to be lifted by crane away from encroaching waves Monday night as the beaches of southern Sydney’s Bate Bay experienced their third major erosion event in less than one month, the St George & Sutherland Shire Leader reported.

“I’ve never seen them this bad,” scientist and writer Dr. Darren Saunders tweeted of the beaches.

The lifeguard tower was removed after waves as high as four to five meters (approximately 13 to 16 feet) crashed against the cliffside supporting the tower Sunday and Monday, the Illawarra Mercury reported. A video shared by Australia’s ABC News showed it clinging perilously to a scooped-out cliffside before its removal.

In addition to North Cronulla, the beaches of Cronulla, Elouera and Wanda have also experienced erosion. Pictures shared on social media also showed erosion at a beach in the Eastern Sydney suburb of Maroubra and at Bar Beach in Newcastle, according to The Guardian.

The erosion comes as the Sydney region has experienced its fourth flooding emergency in less than two years following a storm that brought a year’s worth of rainfall in days to some areas. Both the intensity and frequency of this type of precipitation event have been linked to the climate crisis.

“We will most likely see more events such as these as climate change takes its toll, and we get more east coast lows,” coastal geomorphologist and professor at the University of Melbourne David Kennedy told The Guardian.

Pesce said that the Sutherland Shire Council was requesting aid from the government of New South Wales — the Australian state where Sydney is located — to help the beaches recover, according to the St George & Sutherland Shire Leader. He raised the issue at a recent Zoom meeting for councils impacted by the flooding.

“I said, while we had flooding at Woronora, our beaches have also been destroyed and we need to address that urgently,” he recalled.

However, it’s possible that some of the council’s recovery plans will do more harm than good. A draft management plan calls for the construction of a new seawall at North Cronulla Beach.

Yet Kennedy told The Guardian that seawalls built on either side of the beach in 1974 may actually be increasing the erosion. That’s because coastal development can impair beaches’ ability to shift and recover naturally.

“Beaches are counterintuitive. They’re loose piles of sand. But because they are movable obstructions to the water they are great at sort of laying there and acting as a buffer. They are the shock absorbers of the coast,” he said. “What we’ve done is we’ve removed some of the shocks on the coast, by putting in the seawall, and by doing this we have effectively reduced the beaches[‘] resilience to change. Because what we’re protecting is the infrastructure behind the beach and not necessarily the beaches themselves.”