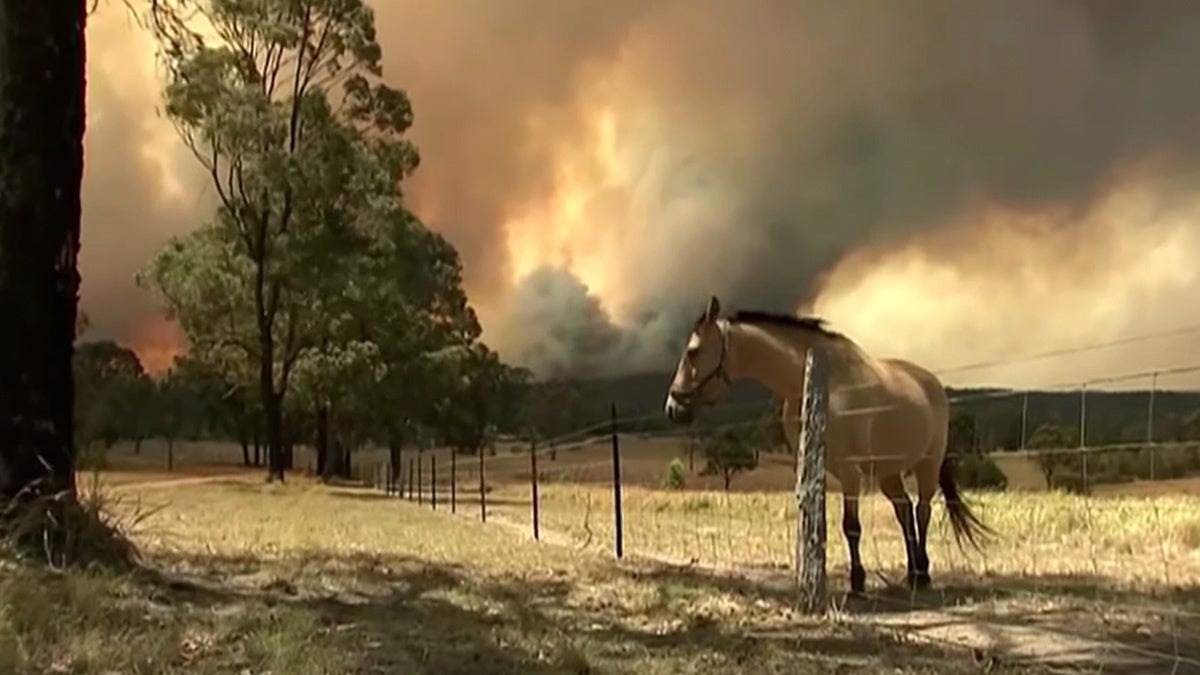 More than 130 wildfires were burning on Australia’s East Coast Sunday, The Guardian reported. The blazes have killed three and destroyed at least 150 structures so far, and conditions are expected to worsen Tuesday, when the greater Sydney area will face “catastrophic fire danger” for the first time.

“Everybody has to be on alert no matter where you are and everybody has to be assume the worst and we cannot allow complacency to creep in,” New South Wales (NSW) Premier Gladys Berejiklian told reporters in Sydney, according to Reuters.

Sydney is the capital of the southeastern Australian state of NSW and the most populous city in Australia. It is expected to see temperatures of up to 37 degrees Celsius Tuesday, which will combine with high winds to increase fire danger.

This appears to be the first such "catastrophic" fire risk designation (the highest level, above "extreme") for #Sydney, Australia and its suburbs since the country's new fire danger rating system was introduced in 2009. #NSWfires #NSWbushfires https://t.co/Bui845VBsV pic.twitter.com/cLWHcyTNyY

Firefighters and scientists have observed that it is unprecedented for so many extreme fires to ignite so early in the season, The New York Times reported.

“The consequences are absolutely apparent and evident over the last few weeks and particularly highlighted in the last 24 hours,” Commissioner Shane Fitzsimmons of the NSW Rural Fire Service told The New York Times. “We have got the worst of our fire season still ahead of us. We’re not even in summer yet.”

Scientists have predicted that the climate crisis would make Australia’s bushfires more frequent and more extreme: Australia’s Climate Council first warned that climate change was already increasing fire risk in 2013. The fires also come as the country has been suffering from a drought, and some of the affected areas are now burning.

Over six years the Climate Council has released 11 reports about the link between climate change and worsening bushfires in Australia. When will politicians listen? When will they do their jobs? #DoYourJob #DisgracefulDenial

But Australia’s political leaders dismissed concerns about climate change. Prime Minister Scott Morrison, who supports the coal industry, refused to answer questions this weekend about the connection between climate change and the current fires, Reuters reported.

“They don’t need the ravings of some pure, enlightened and woke capital city greenies at this time, when they’re trying to save their homes,” he told Australian Broadcasting Corp (ABC) radio, as Reuters reported.

I'm a rural Australian
I'm a survivor of Black Sat bushfires
I'm an agricultural scientist
I'm a volunteer CFA fire fighter
I understand the evidence for climate change
I'm about as far as you can get from the 'inner city'
This comment by #McCormick is insulting.@climatecouncil https://t.co/tSoqVkjU9b

Former Fire and Rescue NSW commissioner and Climate Council member Greg Mullins pushed back against the idea that it was inappropriate to talk about the climate crisis while fires were burning in an opinion piece for The Sydney Morning Herald Monday.

“In the past I have heard some federal politicians dodge the question of the influence of climate change on extreme weather and fires by saying, ‘It’s terrible that this matter is being raised while the fires are still burning.’ But if not now, then when?” he asked.

Greg Mullins is a former NSW fire chief who has just visited firefighters battling blazes in northern California. He has a stark #bushfire warning for Scott Morrison and his government. #abc730 @zdaniel #auspol pic.twitter.com/FaBDYZkYV9

​Mullins pointed out the fingerprints of climate change on the last two decades of Australian fires:

In NSW, our worst fire years were almost always during an El Niño event, and major property losses generally occurred from late November to February. Based on more than a century of weather observations our official fire danger season is legislated from October 1 to March 31. During the 2000s though, major fires have regularly started in August and September, and sometimes go through to April.

The October 2013 fires that destroyed more than 200 homes were the earliest large-loss fires in NSW history – again, not during an El Niño.

This year, by the beginning of November, we had already lost about as many homes as during the disastrous 2001-2002 bushfire season. We’ve now eclipsed 1994 fire losses.

Mullins also noted that this year’s drought was more intense than a major drought in the 2000s; that this year’s wildfires were making their own thunderstorms, something that did not used to happen often when he was fighting fires; and that fires were burning in new areas like rainforests in NSW and Queensland.

Terri Nicholson watched firsthand as the fire menaced rainforest from her parents’ property in Terania Creek. Her parents, Nan and Hugh Nicholson, were instrumental to a successful blockade that saved the forest from logging 40 years ago.

“Nan and Hugh Nicholson hosted the site of the Terania protest to defend this great rainforest from logging and now we’re here defending it due to the effects of climate change,” Nicholson told The Guardian. “I don’t even have the words right now. It’s just gobsmacking and distressing to witness.”

The deadliest fire raged near the town of Glen Innes in NSW. Two people died in that blaze, The New York Times reported. One woman was found unconscious and severely burned Friday and died in the hospital. Another body was found in a car Saturday.

The woman has been identified as 69-year-old Vivian Chaplain, a grandmother of six who died trying to protect her home, Radio New Zealand reported. The victim found in a car was identified as George Nole. Another woman, Julie Fletcher, died north of Taree.

At least seven people are also missing from the fire near Glen Innes, according to The New York Times.

“People were burned, lives were lost,” Glen Innes Mayor Carol Sparks told The New York Times. “People battled to save their houses and then had to walk out because their cars had blown up — it was just horrific.”

As well as extensive damage to homes, buildings and facilities, there is also broad damage to infrastructure including power lines. This is at the Kangawalla fire near Glen Innes. #nswrfs #nswfires pic.twitter.com/xLmkYD3JkL

More than 50 fires were also burning in the northeast state of Queensland Sunday, where homes were destroyed and thousands were forced to flee, The Guardian reported.