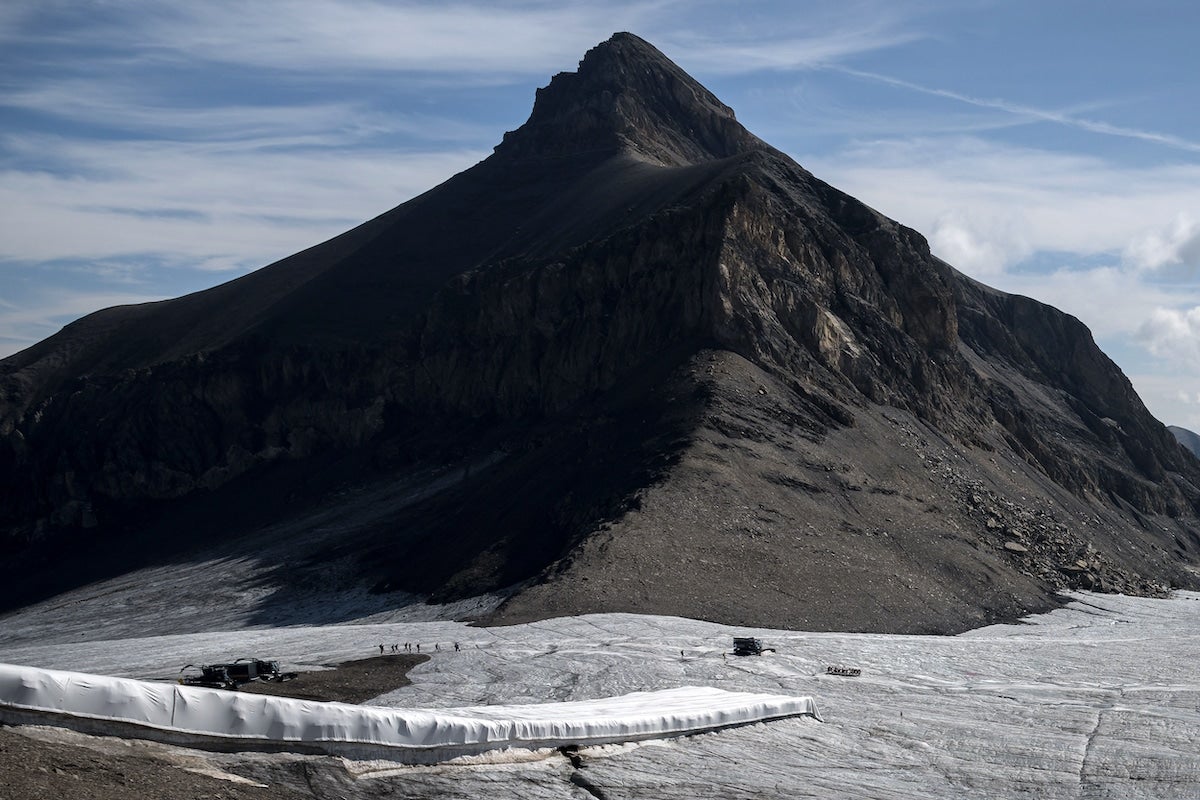 Hikers walk on the Tsanfleuron pass partially free of the ice that covered it for at least 2,000 years, on Aug. 6, 2022. FABRICE COFFRINI / AFP via Getty Images

This summer has hit Europe hard with heat waves and drought, and there’s no better gauge for the extremity of the situation than the Swiss Alps, where glaciers have been melting at an unprecedented pace.

The mountains have been warming so quickly due to the climate crisis that the bare earth of a mountain pass in Switzerland that has been covered in a thick sheet of ice since at least the Roman era is becoming exposed, reported The Guardian.

According to a local ski resort, the mountain pass between the Scex Rouge and Tsanfleuron glaciers will be bare by the end of the summer.

“The pass will be entirely in the open air in a few weeks,” a statement from the Glacier 3000 ski resort said, as The Guardian reported.

Ten years ago, the mountain pass that sits snugly between two glaciers at an altitude of more than 9,000 feet was covered in ice nearly 50 feet thick.

Back then, all you needed was a pair of skis to slip across the pair of glaciers on the border of Valais and Vaud. Now, there is rock and the last of the ancient ice that will soon be gone with summer.

According to Bern University glaciologist Mauro Fischer, this year glacial melt will be an average of three times higher than it has been in the last decade.

After at least six decades of record-keeping, glaciers in the Alps are on their way to shrinking more than ever before, reported Reuters.

This summer’s July heat wave saw temperatures close to 86 degrees Fahrenheit in Zermatt, a village in the Swiss Alps. At the same time, water was freezing at a record 17,000 feet. Normal levels are between 9,800 and 11,500 feet.

Each decade, temperatures in the Alps have been rising at about 0.3 degrees Celsius, which is about twice the global average.

It isn’t just the European Alps that are suffering due to global warming; glaciers all over the world are shrinking. But Alpine glaciers are uniquely at risk due to their size — the mountain range is home to some of the world’s smallest glaciers.

“[I]n terms of the global retreat of glaciers, the small glaciers are responding the fastest to the recent climate change,” said assistant professor at the University of British Columbia Valentina Radic, as reported by Eos.

According to Radic, while bigger glaciers can take centuries to be affected by climate changes, extremely small glaciers respond much more quickly.

In this way, they provide “a good overview of what is happening to the present climate,” said Radic, as Eos reported.

If the world’s greenhouse gas emissions keep increasing, glaciers in the Alps are predicted to decrease by more than 80 percent by 2100.

“We are seeing model results expected a few decades in the future are happening now,” said leader of Glacier Monitoring Switzerland (GLAMOS) Matthias Huss, as reported by Reuters. “I did not expect to see such an extreme year so early in the century.”