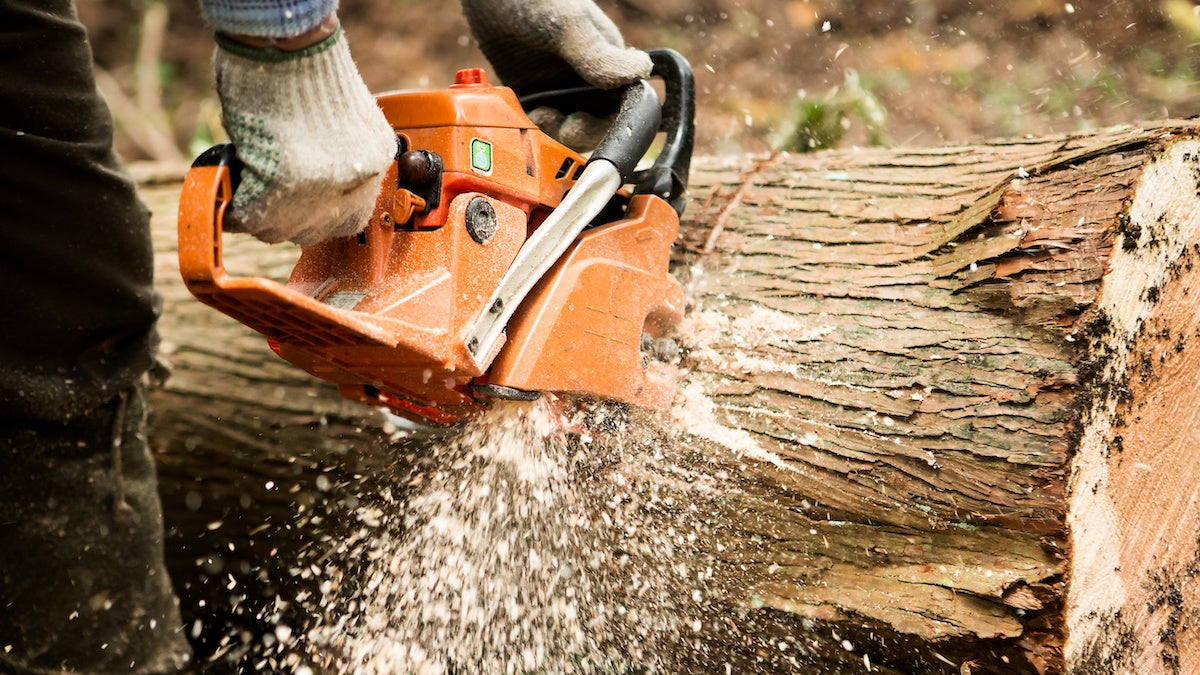 A lumber cuts a tree with a chainsaw. Taiyou Nomachi / Getty Images

The harvesting machine takes just one second to fell the towering spruce, and another to strip the branches and scan its trunk for defects.

“This one is very straight,” operator Antonio Petersson Kvennefelt says of the trunk gripped by the arm of his machine, as a screen in front of him flashes with data.

“The computer decides what it wants the logs to be. This one is for Långasjö, a sawmill in Sweden.”

Kvennefelt has been working in the forests around the city of Växjö in southern Sweden for more than 20 years. When he started out, decisions were mostly left to the forest workers’ judgement, but the industry is now more high-tech.

“The computer makes sure each sawmill gets exactly what that sawmill wants,” he explains.

And across the world, what saw and pulp mills want is more and more wood.

According to the latest figures from the UN’s Food and Agriculture Organization (FAO), global forest production hit record levels in 2018. Up 11% on the year before.

“We see an increasing demand for almost all of our products,” says Göran Örlander, strategist at Södra, Sweden’s largest association of forest owners. “The most obvious demand is for biofuels at the moment. Everybody wants to have biofuels to replace fossil fuels.”

The idea is that burning wood becomes close to carbon neutral if the forests from where it is taken are replenished at the same rate as they are felled for fuel.

But critics question whether this is the case in every country which claims to provide sustainable wood, and say some of what is supplying the current boom in biomass fuels comes from existing forests rather than sustainably managed plantations.

They also point to the carbon emitted from the soil of cleared forests, and to the emissions created in the felling and processing of wood products.

In 2017, 200 scientists wrote to the EU questioning its assumption that wood biomass for energy should be treated as a renewable fuel.

Nonetheless, according to the trade body Swedish Forest Industries, the country’s trees are now capturing and storing a net 48 million tons of CO2 a year as they grow, while another seven million are stored in long-lasting products made from Swedish wood. Taken together, that is enough to make Sweden effectively carbon neutral.

But Professor Johan Bergh, who heads the forestry department at Växjö’s Linnaeus University, just a short walk away from Södra’s offices, says there are very few other countries in the same position.

“Globally I don’t think the forest resource is enough,” he told DW. Particularly not, he added, to supply the transport industry with wood-derived bioethanol or biodiesel.

“A lot of forest would be needed to replace fossil fuels in vehicles,” he says. “It would require at least half of the new forest growth in Sweden at a national level, and of course at a global level, it would be much, much more.”

Other industries are also increasingly showing an interest in wood as a resource.

Not Just for Heating

Södra has teamed up with Dutch airline KLM to explore the feasibility of producing jet fuel from forest biomass, and is also working with the Scandinavian airline SAS on plans for a pilot biofuel plant in the north of Sweden.

Bioplastic packaging — some of which relies on wood fibers — currently makes up just one percent of total plastics production. But that is expected to grow over the coming years.

Architecture firms are also racing to use cross-laminated timber to replace carbon-intensive concrete and steel, and wood-based fibers now represent about six percent of all textiles.

The attraction is clear. When wood is used in buildings, for example, carbon is taken out of the carbon cycle and stored for as long as the building stands.

But according to preliminary findings from a joint United Nations Economic Commission for Europe (UNECE) and UN Food and Agriculture Organization study into future supply and demand scenarios, even if every effort were made to maximize global forest cover, doubling the use of wood in buildings, furniture and other products would reduce rather than increase the amount of carbon sequestered globally.

“The projected increase in wood products carbon in this scenario was not enough to offset the loss in biomass carbon due to increased removals depleting forest stocks,” the authors wrote.

The Limits of Wood

There are also limits to the use of wood for heat and power.

Back in 2010, EUwood, a study led by the University of Hamburg warned that “even if all measures for increased wood mobilization” were implemented, by 2020 the European Union’s domestic sources would struggle to satisfy wood demands and meet renewable energy targets.

By 2018 the EU was already supplementing its wood pellet consumption with imports to the tune of eight million tons. And some conservationists argue member states’ use of biomass is driving deforestation and boosting carbon dioxide levels.

But at Växjö Energy, a Swedish heat and power plant, which became a 100 percent biomass facility in December, chief executive Erik Tellgren is not worried about supply. He says forest owners currently leave most of the branches and tops of trees they cut down to rot.

“There is still a potential of at least twice the amount of residue streams in the forest today that is simply left there,” he says.

There are also other potential changes that would create space for the expansion of global forest cover. Rod Taylor, Global Director of the Forests Program at the World Resources Institute (WRI), believes a shift in global diet away from meat would allow the replanting of huge areas of marginal pastureland.

“The really big win comes through plantations in countries where wood grows fast, like in Brazil,” he argues. “If you have very eroded, low productivity pastureland, and you start planting that up with trees, it could pull a lot of carbon out of the sky.”

Bergh believes it would be possible to at least double forest stocks in key exporting countries such as Sweden, Canada and Russia, while increasing production at the same time.

But with so many industries now looking to the forests for their future carbon-neutral feedstock, even that would be unlikely to cover growing demand.