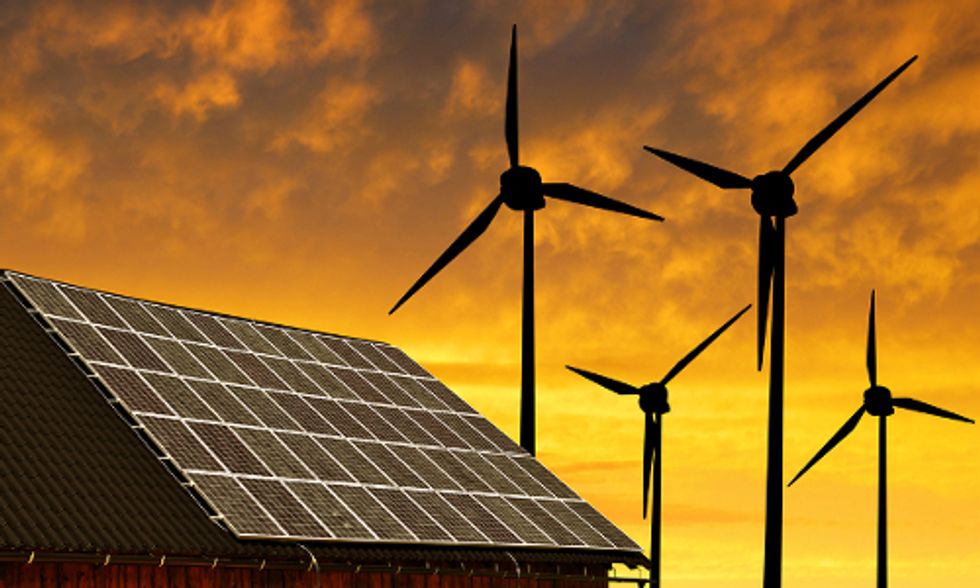 The third annual Sustainable Energy in America Factbook released today documents the continuing dramatic changes in how the U.S. produces, delivers and consumes energy, and makes some projections and predictions about the direction of the energy sector in the future. The report was researched and produced by Bloomberg New Energy Finance and commissioned by The Business Council for Sustainable Energy.

“The 2015 Factbook clearly shows that America is on the path to a more sustainable energy sector,” said Lisa Jacobson, president of the Business Council for Sustainable Energy.
Photo credit: Shutterstock

"To single out just a few tell-tale headlines from the hundreds of statistics presented in this report: over the 2007-2014 period, U.S. carbon emissions from the energy sector dropped 9 percent, U.S. natural gas production rose 25 percent and total U.S. investment in clean energy (renewables and advanced grid, storage and electrified transport technologies) totaled $386 billion," the report said.

The report backs up what other studies have been showing—that despite strong resistance on the part of the fossil-fuel sector and some policymakers, a new way of thinking about energy is taking hold. The factbook points to four significant trends:

In regard to government policies, it specifically cites President Obama's proposed Clean Power Plan, announced in June, to retire coal-fired plants and the historic agreement struck between the U.S. and China in November in which the U.S. pledged to reduce its greenhouse gas emissions by 26-28 percent by 2025 while China would reach peak emissions by 2030.

“The 2015 Factbook clearly shows that America is on the path to a more sustainable energy sector,” said Lisa Jacobson, president of the Business Council for Sustainable Energy. “Our energy productivity is rising along with economic growth, while energy-intensive industries are onshoring production to the United States to take advantage of low energy costs. All of this is happening as investment in clean energy continues to grow and as new natural gas infrastructure continues to come online. These are strong positive signs for America’s economy and environment.”

In addition, the trend toward decarbonization continues with renewable energy's share of the total energy mix rising from 7 percent in 2007 to 13 percent in 2014. Since 2000, 93 percent of new U.S. power capacity has been natural gas, wind, solar, biomass, geothermal or other renewable projects. Investment in the clean energy sector has grown hand in hand with that, adding up to $386 billion since 2007 and increasing by 7 percent in 2014 over 2013's level.

“Against the backdrop of a surging economy and crumbling oil prices, major trends around decarbonization and improving energy productivity continued in the United States,” said Michel Di Capua, head of Americas research for Bloomberg New Energy Finance. “Low-carbon energy technologies stand to benefit from key policies proposed in 2014, including the U.S. Environmental Protection Agency’s proposed regulation for the power sector and an innovative new vision for the electricity market in New York State.”

The report finds that gasoline consumption in the transportation sector is down by 8 percent, due to a combination of factors including more energy-efficient vehicles, the public's preference for those vehicles and a decline in driving, as well as the still small but growing adoption of hybrid and electric vehicles. Yet conversely the factbook says, thanks largely to fracking, U.S. oil production has grown by 41 percent since 2007 and "has returned to levels not seen since the 1980s."

It also points to some retrenchment in clean energy growth. In what will seem like mixed news to many renewable energy advocates, the contribution of natural gas to U.S. electricity generation has declined somewhat since 2013, and thanks to a drop in energy prices, that has allowed coal to become more competitive and regain a small piece of its market share, ticking up to 39 percent in 2013 and 2014, after dropping to 37 percent in 2012 from 49 percent in 2007. But longer-term trends, especially the closing of coal-fired power plants, will probably not sustain such growth in the future. Carbon emissions have increased as well, although that trend too is likely to reverse as coal-fired plants are shut down.

The final area of backtracking the factbook points to is the uncertainty over the very government policies the report says have fueled growth in the sustainable energy sector. Regarding President Obama's Clean Energy Plan and the U.S.-China agreement, it says, "Neither policy will come easy. Legal challenges to the EPA’s proposal are underway, and achievement of the 2025 pledge will require new policy action."

The enactment of policies at the state level that encouraged investment in and growth of wind and solar power has not just slowed down but shows signs of reversing. In 2014, Ohio froze its renewable energy standards, which has reduced job growth and investments in solar and wind projects, while Arizona is considering a tax on rooftop solar installations, and other states are discussing such backward moves, including the Hoosier state.

"Policy actions taken by the U.S. in 2014 have set the stage for a potentially momentous global climate summit at Paris in December 2015," says the report. "The U.S.-China pact was the most notable achievement in the global climate negotiations process in 2014. Such public pledges from China and the U.S. (the world’s first and second biggest emitters, respectively) have the potential to challenge other nations to do more as well. The summit to be held in Paris at the end of 2015 will be the most significant multilateral climate negotiations since the discussions in Copenhagen in 2009. The growth of sustainable energy is a critical part of achieving any targets that might be struck under diplomatic deals on greenhouse gas emissions."