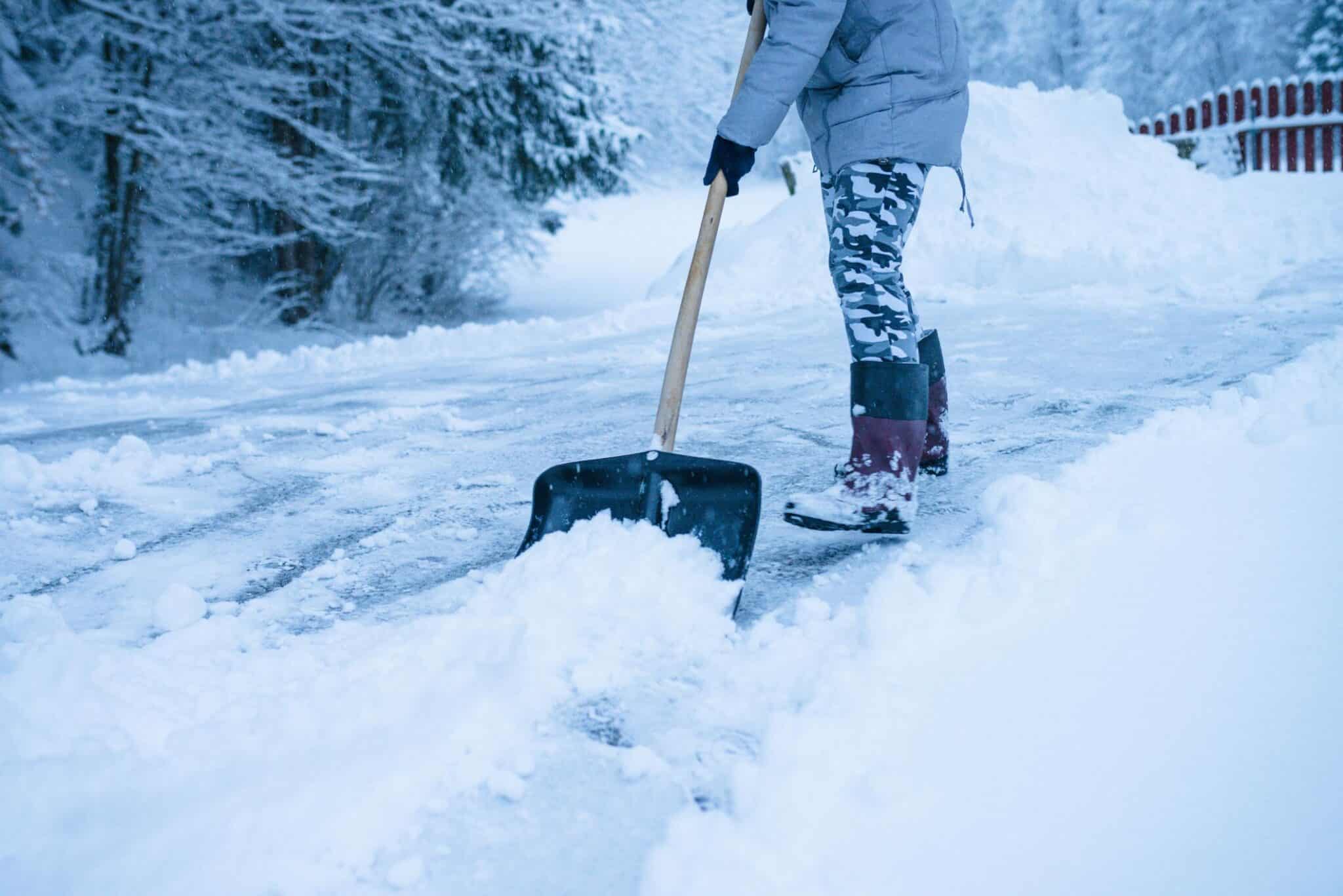 When the snow starts falling, many communities send out the big trucks to dump loads of salts on roads. Many homeowners will also add salts to sidewalks to keep people safer from slip hazards. In the U.S., we use about 15 to 32 million metric tons of road salts per year. Road salts were first used in New Hampshire in 1938, and since have become a popular and effective deicing method. Much of the salt is mined in Kansas, Louisiana, Michigan, New York and Ohio.

But conventional deicers can wreak havoc on ecosystems, as the salts often wash into nearby streams. Salts in water can create aquatic dead zones that suffocate plant and aquatic life.

Road salts can also damage concrete and stone and cause rust and other damage on vehicles. Even worse, road salts are often used far too excessively, leading to high amounts of waste. One study found that 70% of applied road salts in a city ended up in the watershed, and they were generally ineffective if the roads or sidewalks were colder than 15°F.

Fortunately, many municipalities and clever minds are coming up with new methods to melt snow and ice or prevent it from sticking to walkways and roads. Creative and sustainable options are out there, and many times, you need to use less of them to work and they cost less than road salts. 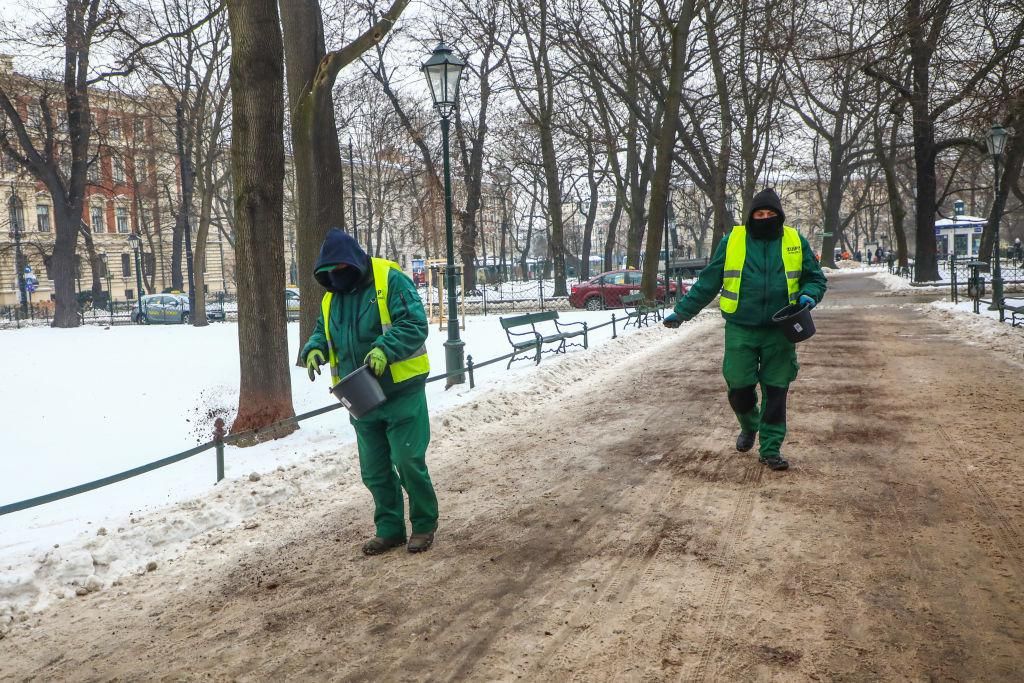 Municipal workers sprinkle alleys in Planty park with coffee grounds in Krakow, Poland on February 10, 2021. The city of Krakow, inspired by its sister city in Ukraine, Lviv, started collecting used coffee grounds from local cafés and use them instead of salt or sand as an ecological way to safeguard against slippery winter conditions. Beata Zawrzel / NurPhoto / Getty Images

The chloride in road salts is a pollutant that remains in the environment for decades. According to one study, 37% of drainage areas in the contiguous U.S. have experienced increased salinization in the past five decades.

“Salt is something of a ticking time bomb for freshwater,” Paul Gallay, Riverkeeper president and Earth Institute adjunct professor, told Jeremy Hinsdale, reporter for Columbia Climate School. “Studies suggest that the increasing concentrations we see in many places may be the result of road salt spread decades ago, which reached groundwater, and is only now slowly reaching surface waters.”

Some manufacturers are turning toward more sustainable deicers, and the EPA has created a Safer Choice database where consumers can find “green” deicers.

Still, there are other options that you can find in your own home or that contain even more eco-friendly ingredients, including brines, coffee grounds, and even sugar beet juice.

You may have used alfalfa meal as fertilizer, but it’s also effective for melting ice. Alfalfa meal has a grainy texture that also offers more traction as you walk. You can typically find this product at garden supply or home improvement stores.

Still, this deicer is best used in moderation. It contains nitrogen, which can be good for soil. But in water, excessive nitrogen can lead to algal blooms, which decrease oxygen in the water for fish and plants.

There’s no need to toss out old coffee grounds used to make your morning cup of joe. Instead, spent coffee grounds are somewhat effective in melting ice, plus they add traction to the walkways. Nitrogen in the coffee grounds reacts with the ice to help melt it, but again, be cautious in how much nitrogen you add, which can run off into local aquatic ecosystems.

Sugar beet juice is a popular ice melt option that lowers the freezing point of ice and helps deicers stick to the ground better. Unlike road salts, it’s safe for pets and not corrosive to vehicles. On its own, sugar beet juice isn’t as effective as other deicers, but it does reduce the amount of conventional deicers you would need to clear up your walkways.

This option is often highly regarded as an environmentally friendly option for snow and ice removal, but it’s not without its caveats. One 2018 study observed sugar beet juice deicer’s impact on insects and found it created psychological stress in mayflies. More research is needed on beet juice deicers to determine how environmentally safe they are, but they are still an improvement compared to conventional road salts.

One study found that a solution made with grape extracts melts ice quicker than conventional salts, all without damaging roads or harming the watershed. Researchers at Washington State University used chemical degradation and fermentation to extract chemicals from wasted grape skins. The resulting solution melted ice quickly, and the process to make it also produces no waste.

The researchers have also had success in using this process to create deicers from many types of agricultural waste, including peony leaves, sugar beet leaves, dandelion leaves, and apples.

“We delivered a more sustainable solution because we’re introducing less chlorides into the road operations and are achieving comparable or better performance. It’s one step in the right direction,” said Xianming Shi, associate professor in Civil and Environmental Engineering and co-author of the study. “The beauty of this approach is that it allows us to diversify. We can use this same platform technology in different regions of the country but choose a different agricultural product, depending on what source of waste is available.”

While this product isn’t to market yet, it’s a promising alternative on the horizon for safe snow and ice removal that also makes use of waste plants.

That extra pickle juice in the jar? If you’re not going to drink it, maybe you can use it to clear your frosty sidewalks. In another effort to turn waste into something useful, people have creatively used brines like pickle or cheese brine instead of road salts.

A shortage of road salts in Bergen County, New Jersey in 2011 led public officials to swap in pickle brine to keep snow and ice from getting out of control. One major benefit? The pickle brine cost about 7 cents per gallon, where road salts at the time were over $60 per ton.

Cheese brine is also effective when used to prevent snow and ice accumulation. In Wisconsin, cheese-makers end up with tens of thousands of gallons of cheese brine annually. Instead of wasting it, residents of Polk County started applying the brine to sidewalks and roads ahead of projected snowfall. The brine can prevent ice as long as the temperatures stay above -23°F.

You can also skip deicers completely or pair them with some of the following snow removal methods for additional eco-friendly ways to keep your property safe. These options are more suitable for residential use rather than city- or county-wide.

With some time and a little elbow grease, a shovel can go a long way in clearing your sidewalks of snow. If you don’t want to go it alone, make it a family activity to get the job done faster. For those who’d rather stay cozied up inside by the fire, consider hiring someone to clear the sidewalks for you. Local teenagers are often more than happy to help tackle the work for some extra spending money.

In its tests, Consumer Reports found a reliable gas-powered snow blower that costs $420, while electric snow blowers that were comparable in quality cost $650 to $1,300. But when you factor in the cost of gas, especially lately, and the considerable amount of emissions every time you clear off those slippery sidewalks, the electric option is worth the initial upfront cost.

For another ingenious option for melting away snow and ice from your porch and walkways, consider heated snow mats. These mats are powered electrically and often made with rubber to stand up to the elements. Not only do they have a non-slip surface to walk on, but they can also melt snow at a rate of about 2 inches per hour to keep your walkways safe.