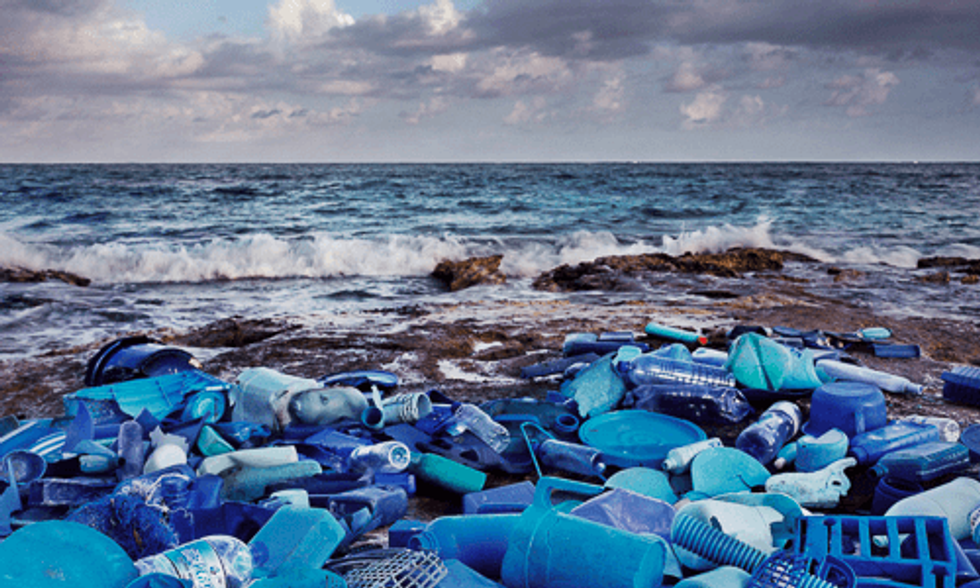 Brooklyn-based multimedia artist Alejandro Durán is bringing attention to the devastating environmental catastrophe of global waste and plastic pollution. In this ongoing project, Washed Up: Transforming a Trashed Landscape, the pristine beauty of Sian Ka’an—Mexico’s largest federally-protected reserve—is contrasted with colorful yet unsettling garbage collected from all over the world.

"With more than 20 pre-Columbian archaeological sites, this UNESCO World Heritage site is also home to a vast array of flora and fauna and the world’s second largest coastal barrier reef," the Mexico City-native said about the site of his installation. "Unfortunately, Sian Ka’an is also a repository for the world’s trash, which is carried there by ocean currents from many parts of the globe."

Algas (Algae), 2013. About 8 million metric tons of plastic is dumped into the world’s oceans each year. Photo Credit: Alejandro Durán Mar (Sea), 2013. "At times I distribute the objects the way the waves would; at other times, the plastic takes on the shape of algae, roots, rivers or fruit, reflecting the infiltration of plastics into the natural environment." Photo Credit: Alejandro Durán

Over the course of the project, Durán identified waste from 50 different countries across six continents that have surfaced along a single coastline of Sian Ka'an. As we previously reported, 8 million metric tons of plastic is dumped into world’s oceans each year, causing $13 billion in damages to marine ecosystems annually.

Vena (Vein), 2011 and Rayo (Ray), 2011. These photos bring much-needed attention to consumerism and its devastation to the environment. Photo Credit: Alejandro Durán

Durán uses this international debris to create color-based, site-specific sculptures. "Conflating the hand of man and nature, at times I distribute the objects the way the waves would; at other times, the plastic takes on the shape of algae, roots, rivers or fruit, reflecting the infiltration of plastics into the natural environment," he said.

Brotes (Shoots), 2014. Durán's work "examines the fraught intersections of man and nature, particularly the tension between the natural world and an increasingly overdeveloped one." Photo Credit: Alejandro Durán

Durán hopes to "change our relationship to consumption and waste" with his project. "More than creating a surreal or fantastical landscape, these installations mirror the reality of our current environmental predicament," he said. "The resulting photo series depicts a new form of colonization by consumerism, where even undeveloped land is not safe from the far-reaching impact of our disposable culture."

The artist has collected thousands of plastics and other waste items from 50 nations across six continents that have surfaced on a single Mexican shoreline. Photo Credit: Alejandro Durán

Visit his website to see more of his work. The artist will be displaying his project at upcoming exhibitions and discussions. Go here for dates and locations.