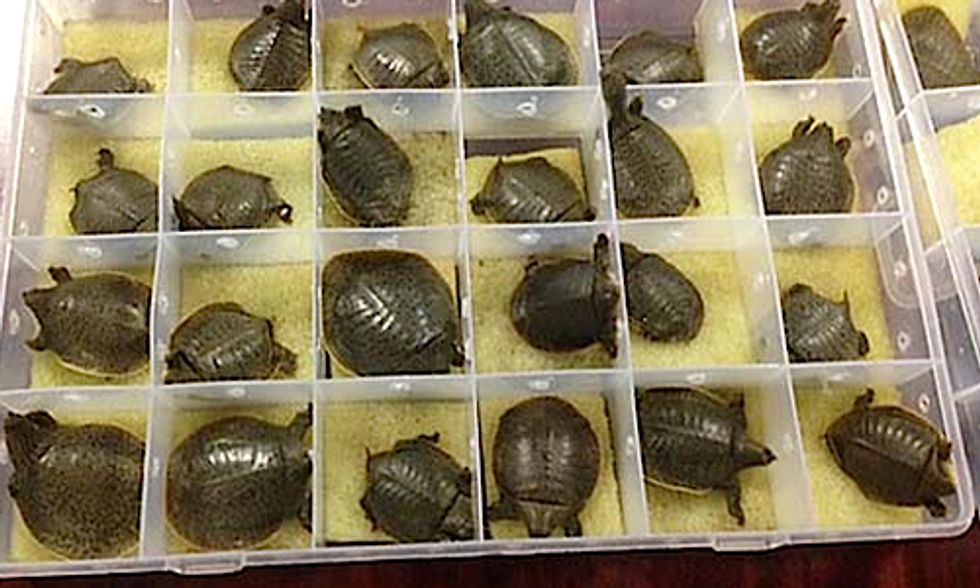 Hot on the heels of three major tortoise and freshwater turtle seizures in Asia comes another seizure in Bangkok involving hundreds of animals and the arrest of two men suspected of attempting to smuggle them.

Indian Narrow-headed Softshell Turtles seized during at attempt to smuggle them via Bangkok. © TRAFFIC

The two Indian nationals, who took a flight from Gaya and Varanasi in India to Bangkok, were due to board a flight to Macau when their luggage was checked and the animals found.

Initial investigations show the end destination for the turtles was Hong Kong. The duo has been handed over to Royal Thai Police for further investigations.

“This previously unknown trade route for smuggling turtles from Gaya and Varanasi to Bangkok is often used by religious tourists,” said Dr. Shekhar Kumar Niraj, head of TRAFFIC in India.

One of these recent seizures, which took place on Jan. 31, also included a number of Black Spotted Turtles, a species listed in Appendix I of the Convention on International Trade in Endangered Species of Wild Fauna and Flora (CITES), which therefore cannot be traded internationally for commercial purposes.

Another case involved a further 65 Black Spotted Turtles, discovered by Thai Customs and wildlife checkpoint officers at Don Mueang International Airport in unclaimed bags on board a flight from Chennai, India, along with 440 Indian Star Tortoises Geochelone elegans.

Both the Endangered Indian Narrow-Headed Softshell Turtle and the Indian Star Tortoises are listed in Appendix II of CITES, meaning any shipments must be accompanied by appropriate permits. Both species live in South Asia and are known to be traded for meat and as exotic pets.

India is not the only player in the trade from South Asia in tortoises and freshwater turtles. Seizures of cargoes in Bangkok originating in Bangladesh and Pakistan have also been recorded in the past 12 months.

There are also trade dynamics that point to intra-regional movements of these species. In February, 5,000 softshell turtles were seized in West Bengal en route to Bangladesh.

“Co-operation between India and other member countries of the South Asia Wildlife Enforcement Network is essential to combat the increasingly organized nature of wildlife crime in the region, and connect to destinations in Thailand, Hong Kong and other parts of Asia,” said TRAFFIC’s Dr. Niraj.

“Catching the mules of the trade won’t be enough to stop the organized criminal elements that are driving the regions rare tortoises and freshwater turtles to the brink,” said Dr. Chris R. Shepherd, regional director for TRAFFIC in South-East Asia.

“Seeking out and stopping the big guns that control this trade should be the real focus of enforcement action.”