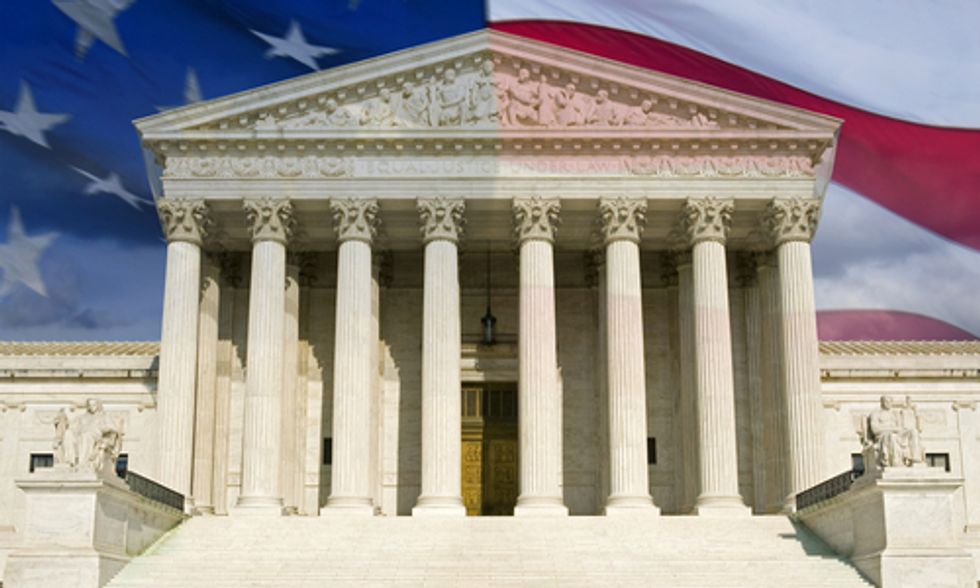 The U.S. Supreme Court today issued a decision in the landmark federal lawsuit, Organic Seed Growers and Trade Association (OSGATA) et al v. Monsanto. Farmers were denied the right to argue their case in court and gain protection from potential abuse by the agrochemical and genetic engineering giant, Monsanto. Additionally, the high court decision dashes the hopes of family farmers who sought the opportunity to prove in court Monsanto’s genetically engineered seed patents are invalid.

Farmers had sought Court protection should they become the innocent victims of contamination by Monsanto’s patented technology they could not be sued for patent infringement, but their case was denied by the court.
Photo courtesy of Shutterstock

"While the Supreme Court's decision to not give organic and other non-GMO farmers the right to seek preemptive protection from Monsanto's patents at this time is disappointing, it should not be misinterpreted as meaning that Monsanto has the right to bring such suits,” said Daniel Ravicher, executive director of the Public Patent Foundation and lead counsel to the plaintiffs in OSGATA et al v. Monsanto.

“Indeed, in light of the Court of Appeals decision, Monsanto may not sue any contaminated farmer for patent infringement if the level of contamination is less than one percent," Ravicher explained. "For farmers contaminated by more than one percent, perhaps a day will come to address whether Monsanto's patents may be asserted against them. We are confident that if the courts ever hear such a case, they will rule for the non-GMO farmers."

Farmers had sought Court protection under the Declaratory Judgment Act that should they become the innocent victims of contamination by Monsanto’s patented gene-splice technology they could not perversely be sued for patent infringement.

“The Supreme Court failed to grasp the extreme predicament family farmers find themselves in,” said Maine organic seed farmer Jim Gerritsen, president of lead plaintiff OSGATA. “The Court of Appeals agreed our case had merit. However, the safeguards they ordered are insufficient to protect our farms and our families."

"This high court which gave corporations the ability to patent life forms in 1980, and under Citizens United in 2010 gave corporations the power to buy their way to election victories, has now in 2014 denied farmers the basic right of protecting themselves from the notorious patent bully Monsanto,” said Gerritsen.

The historic lawsuit was filed in 2011 in Federal District Court in Manhattan. The large plaintiff group numbers 83 individual American and Canadian family farmers, independent seed companies and agricultural organizations whose combined memberships total more than one million citizens, including many non-GMO farmers and over 25 percent of North America’s certified organic farmers.

“The Appellate Court decision could leave Canadian farmers out in the cold because their protection may not extend to Canada at all,” said Saskatchewan organic grain farmer Arnold Taylor, a member of plaintiff member Canadian Organic Growers. “Like many Canadian farmers, we sell crop into the U.S. and can therefore be liable to claims of patent infringement by Monsanto.”

In a complicated ruling issued in June 2013 by the U.S. Court of Appeals for the Federal Circuit in Washington, D.C., American farmers were handed a partial victory when the three justices agreed with the farmers’ assertion that contamination by Monsanto was inevitable. The justices ordered Monsanto not to sue American farmers whose fields were contaminated with trace amounts of patented material, which the Court defined as 1 percent.

In a related situation, Canadian soybean farmer Stephen Webster of Ontario experienced just how abusively Monsanto treats innocent contamination victims. Through no fault of his own Webster, who farms with his elderly father, had his 2012 identify-preserved non-GMO soybean crop contaminated by Monsanto’s patented genetically engineered seed. Their soybeans were ruined for export to specialty markets in Japan.

“First Monsanto claimed we had too many bees and that we were at fault for the contaminated crop,” said Webster. “Then they threatened to run up $100,000 in legal bills that we would have to pay.” Tragically, Webster’s story is the norm in farm country, with Monsanto using its extreme economic power to silence family farmers even before they can legally defend themselves.

“We have a fourth generation farm,” said organic dairy farmer and plaintiff Rose Marie Burroughs of California Cloverleaf Farms. “Monsanto cannot be trusted. Their refusal to provide a binding legal covenant not to sue our fellow farmers would make anyone wonder, what are their real motives? GMO contamination levels can easily rise above one percent and then we would have zero protection from a costly and burdensome lawsuit.”

Significant contamination events, including Starlink corn and LibertyLink rice, have already cost farmers and the food companies nearly $2 billion dollars. In the past year alone, the discovery of Monsanto’s illegal GMO wheat in an Oregon farmer’s field and GMO alfalfa in Washington state sent foreign markets, where GMOs are not wanted, reeling. In both instances farmers’ economic livelihoods were put at risk as buyers in foreign markets refused to buy the GMO contaminated crops.

“If Monsanto can patent seeds for financial gain, they should be forced to pay for contaminating a farmer’s field, not be allowed to sue them," said Dave Murphy, founder and executive director of Food Democracy Now! “Once again, America’s farmers have been denied justice, while Monsanto’s reign of intimidation is allowed to continue in rural America.”

“Monsanto has effectively gotten away with stealing the world’s seed heritage and abusing farmers for the flawed nature of their patented seed technology," said Murphy. “This is an outrage of historic proportions and will not stand.”