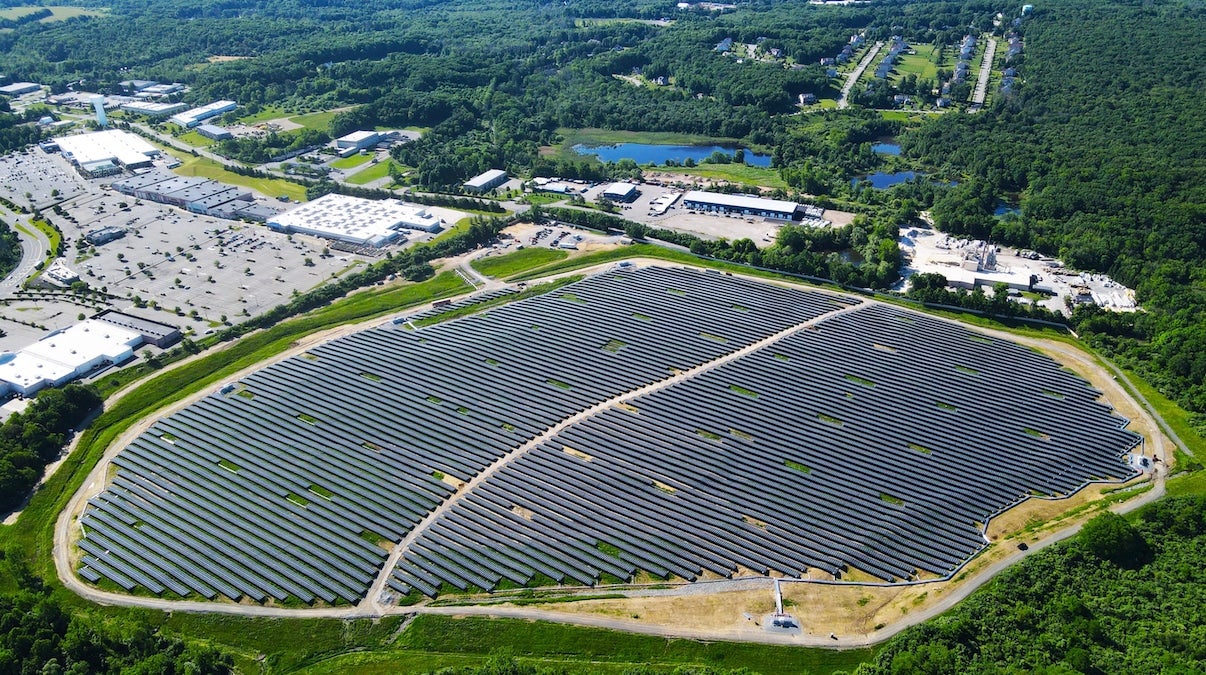 The 25.6 megawatt solar farm, which was completed Friday, is just one example of an innovative trend turning symptoms of throwaway culture into sites for generating renewable energy.

“We’re pleased to have been able to work closely with our reliable, long-time partners to convert yet another, previously unusable, landfill site into a renewable energy generating power plant,” CEP Renewables Executive Vice President Chris Ichter said in an announcement. “There are over 10,000 closed landfills in the United States, yet only a small fraction of these parcels have been redeveloped. Transitioning more of these landfill sites into solar projects will create more local tax revenue, jobs, cleaner air, and affordable energy for residents throughout the country.”

The New Jersey solar farm comes from a partnership between CEP Renewables and CS Energy, with rack systems provided by Terrasmart and steel skids provided by Lindsay Precast, according to Electrek. The land beneath the panels is owned by CEP Renewables, which has leased it longterm to NJR Clean Energy Ventures, a subsidiary of Garden State utility New Jersey Resources that will own and operate the farm.

The farm contains 56,000 panels and is projected to power more than 4,000 households. All told, the project enabled Mount Olive to earn back almost $2.3 million in taxes it had paid on the former Superfund site.

All of this is quite a change in fortunes for the former dump. The Combe Fill North Landfill opened as a municipal landfill in 1966, according to the U.S. Environmental Protection Agency (EPA). For 12 years, it accepted dry sewage sludge and domestic and industrial waste. Then, the Combe Fill Corporation (CFC) bought it in 1978. Under its new owners, it was discovered that the landfill was contaminating groundwater beneath the site as well as nearby private wells with volatile organic compounds. The indoor air in the landfill was also polluted. In 1981, CFC went bankrupt but failed to properly close the landfill. Finally, the EPA and the The New Jersey Department of Environmental Protection (NJDEP) developed a plan to clean the former landfill in 1986, which was completed in 1991. In 2004, the landfill was crossed off the Superfund National Priorities List, but the EPA still reviews the effectiveness of the cleanup efforts every five years.

The Combe Fill North Landfill’s journey from dump to solar farm is increasingly common. The EPA says that the number of landfill solar projects in the U.S. has gone up 80 percent in the last five years, according to CEP Renewables. The company argues this is because installation developers have increased their expertise, something its partner CS Energy supports.

“This is our eighth project with CEP Renewables, our seventh project with Lindsay Precast and our fourteenth landfill solar project with Terrasmart,” CS Energy Director of Operations Mike Dillon said in the announcement. “Our strong partnerships with each of these industry leaders also enabled us to efficiently deliver this high quality landfill solar project, which will provide significant financial and environmental benefits to this community long-term.”