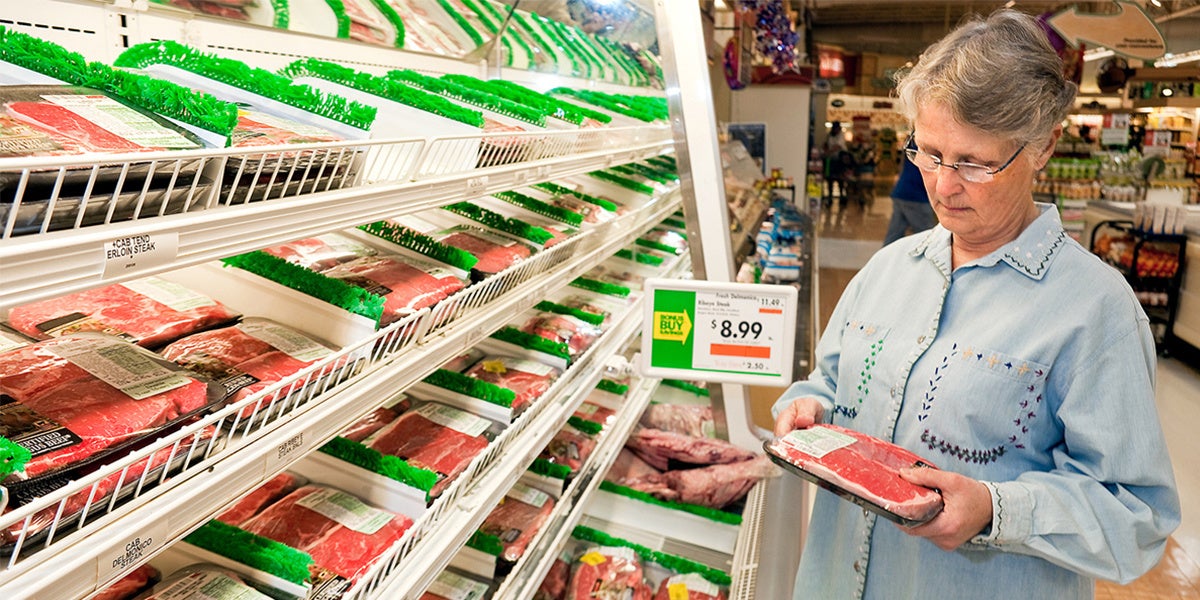 A shopper examines a package of meat in a grocery store for freshness. USDA / CC BY 2.0

The latest round of tests by federal scientists found antibiotic-resistant bacteria on nearly 80 percent of supermarket meat in 2015, according to a new analysis by the Environmental Working Group.

Those bacteria were resistant to at least one of 14 antibiotics tested for by the National Antimicrobial Resistance Monitoring System, a federal public health partnership.

“Consumers need to know about potential contamination of the meat they eat, so they can be vigilant about food safety, especially when cooking for children, pregnant women, older adults or the immune-compromised,” said Dawn Undurraga, EWG’s nutritionist and author of the report.

Drug-resistant bacteria—sometimes referred to as superbugs—were detected on 79 percent of ground turkey, 71 percent of pork chops, 62 percent of ground beef, and 36 percent of chicken breasts, wings and thighs sampled in supermarkets by NARMS in 2015, the latest year for which data is available.

“Bacteria transfer their antibiotic resistance genes to other bacteria they come in contact with in the environment and in the gastrointestinal tract of people and animals, making it very difficult to effectively treat infections,” said Dr. Gail Hansen, a public health consultant and veterinarian.

Despite this serious threat, the federal government still allows meat producers to give antibiotics important for human health to healthy animals. This practice aims to compensate for stressful, crowded or unsanitary conditions on factory farms.

“When one person or group misuses antibiotics, they cause resistance to the antibiotics to spread, hurting everyone in society,” said Dr. Brad Spellberg, who is the chief medical officer at the Los Angeles County and University of Southern California Medical Center, and associate dean for clinical affairs at the Keck School of Medicine at the University of Southern California, but expressed his own opinion. “It’s not acceptable for one group of people to profit by hurting everyone else in society.”

“By choosing organic meat and meat raised without antibiotics, consumers can help reduce the amount of antibiotics used in farm animals and slow the spread of drug resistance,” Undurraga said.

She recommended shoppers follow EWG’s tipsheet on how to avoid superbugs in meat. Among other guidance, it tells consumers which food labels accurately identify meat raised without antibiotics.

In conjunction with the release of its report and label decoder, EWG submitted a letter to the Food and Drug Administration, calling attention to the issue of superbugs in American meat and asking for proactive federal action to curtail the threat.

“The public shouldn’t have to wait until 100 percent of the bacteria found on meat are untreatable with antibiotics before the FDA takes strong action,” Undurraga said. “Now is the time for the FDA to get medically important antibiotics off factory farms.”

Here's Why Most Most of the Meat Americans Eat Is Banned in Other Industrialized Countries https://t.co/mDMgvDrs28 @food_democracy