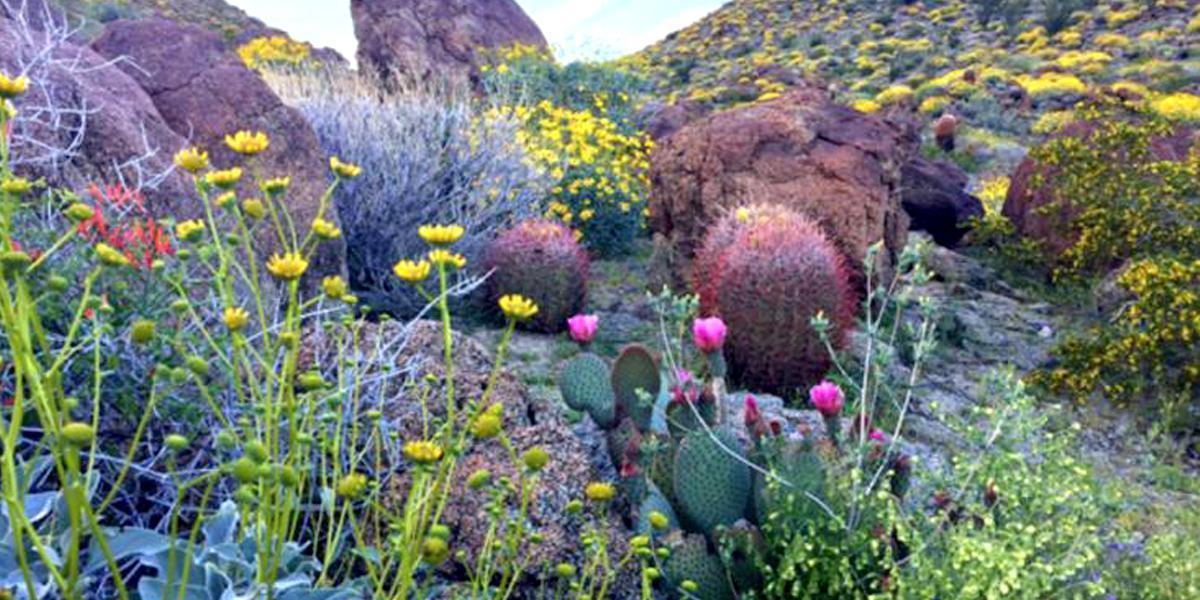 March marked the first time in a drought-parched decade that Anza-Borrego Desert State Park—located in the Colorado Desert about two hours outside San Diego—saw 10 inches of rain. This is according to Norb Ruhmke, acting district superintendent for the Colorado Desert District. In a normal full year, he said, the Anza-Borrego desert gets six inches.

That’s because for a few weeks this March, all that rain triggered an unprecedented spring “super bloom” of annual wildflowers, including sunflowers, sand verbena, dune evening primrose and ocotillos. The onslaught of visitors to the park, Theriault said, had the feel of Disneyland, overflowing with tourists in shorts and sneakers, cameras in hand. “There were people arriving in their cars and asking where the rides were.”

Anza-Borrego is no theme park. It’s an arid, sandy desert with the Borrego Valley at its center. The park is surrounded by the Vallecito Mountains to the south and the Santa Rosa Mountains to the north. The sun is shadeless and punishing and for the majority of the year, shrubs and rocks dominate the landscape.

Many of the visitors who turned out for the super bloom were flower enthusiasts—some came from as far away as Washington State, the East Coast and even Japan, according to Theriault. Many had never been to Anza-Borrego before but had seen reports of the super bloom via Facebook, Instagram and Twitter and afterward hopped in their cars to see the phenomenon for themselves. Some out-of-towners, unaccustomed to the wildness of park roads and overly trusting of technology, followed GPS imperatives into sand-filled ditches and required help getting out.

Ruhmke said park officials posted updates on its website about where to find flowers, in hopes that flower pilgrims would spread out across the park. But most came straight to the visitor center, which saw 90,000 visitors in March—between 2,000 and 5,000 every day. In years past, Theriault said, that number has been closer to 30,000 annually; during summer, when the temperatures can spike well beyond 100 degrees, only a couple hundred people tend to visit each day.

“The word seemed to get out faster this year and more people seemed to be coming to the visitor center,” Theriault said. “We were really just about at capacity.”

According to Theriault, the super bloom did indeed live up to its hype—at least for a couple of colorful weeks. By now, most of the flowers have dried up, but Theriault said it was the biggest bloom she could remember since the spring of 2005.

Ruhmke said that while most people congregated at the visitor center during the bloom, the “most majestic” flowerscapes were in Coyote and Henderson Canyons. “For me to enjoy the desert,” he said, “I really have to get away from the crowds.” But, he’s confident that those who came during the bloom found what they were looking for.

“There’s nothing better than when you’re driving down to Montezuma Grade and dropping down into the desert floor,” he said. “It’s beautiful.”