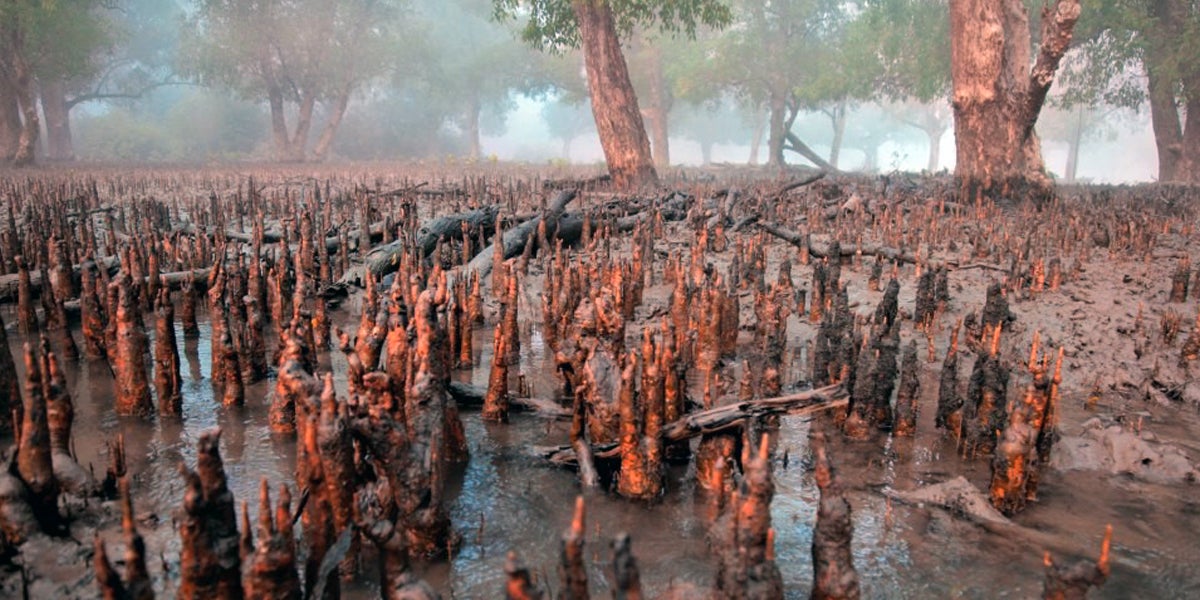 In conjunction with the Save the Sundarbans protest today at the UN’s headquarters in New York City, we’re revealing in this EcoWatch exclusive that Friends of the Earth U.S. obtained documents that suggest the U.S. Export-Import Bank, Ex-Im Bank, which is supported by taxpayer dollars, is considering financing the Orion-Khulna coal plant near the Sundarbans in Bangladesh. 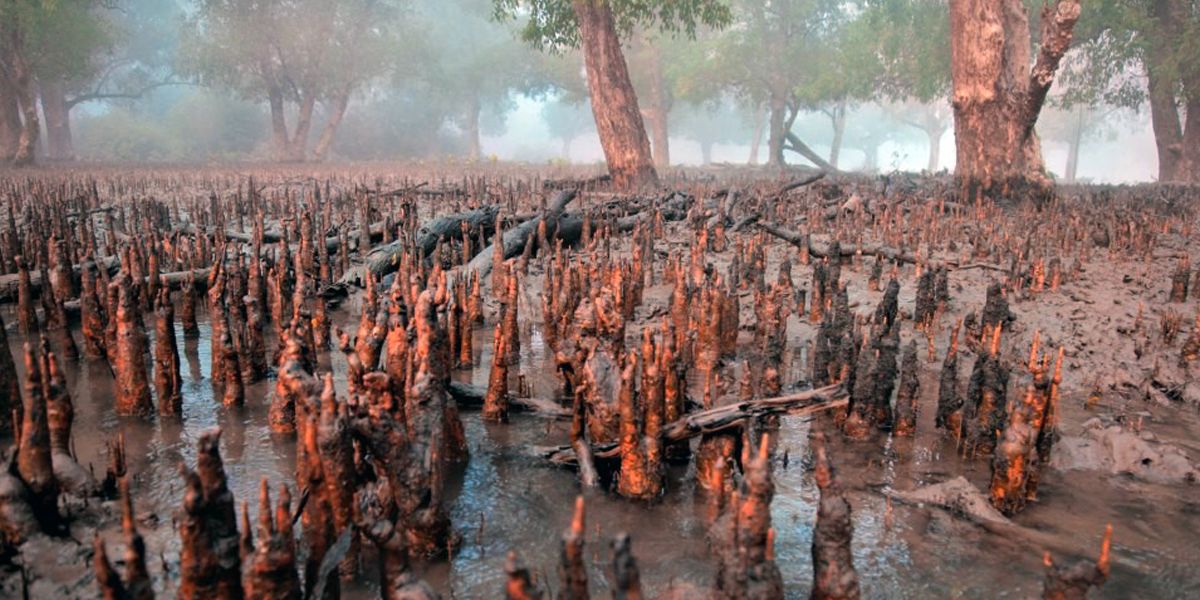 Mangroves in the Sundarbans in Bangladesh.Mohammad Rakibul Hasan

The struggle for climate justice in Bangladesh, however, did win an important battle in July. Responding to public pressure from advocacy groups, Ex-Im Bank is no longer considering financing for a coal plant proposed to be built outside Bangladesh’s capital city of Dhaka, one of the largest cities in the world. This coal plant, known as the Orion-Dhaka project, would burn coal just a few miles outside Dhaka, poisoning the air and water of 17 million people. While it remains unclear if the Orion-Dhaka project will move forward without U.S. financing, Ex-Im Bank’s withdrawal represents an important victory for protecting people and the climate.

While activists celebrate this decision, our celebration is short-lived. We have reason to believe that Ex-Im Bank will finance another coal plant in Bangladesh. According to media reports, the Bangladeshi company Orion Group, originally claimed to have secured financing for not one, but two coal projects in Bangladesh from Ex-Im Bank.

The second coal plant, known as the Orion-Khulna project, is proposed to be built 14 kilometers from the Sundarbans, the world’s largest mangrove forest and a UNESCO World Heritage site. The Sundarbans, which spans the border of India and Bangladesh, is home to endangered species like the Bengal tiger and Irrawaddy dolphin, and provides a home and livelihoods for upwards of 6 million people. 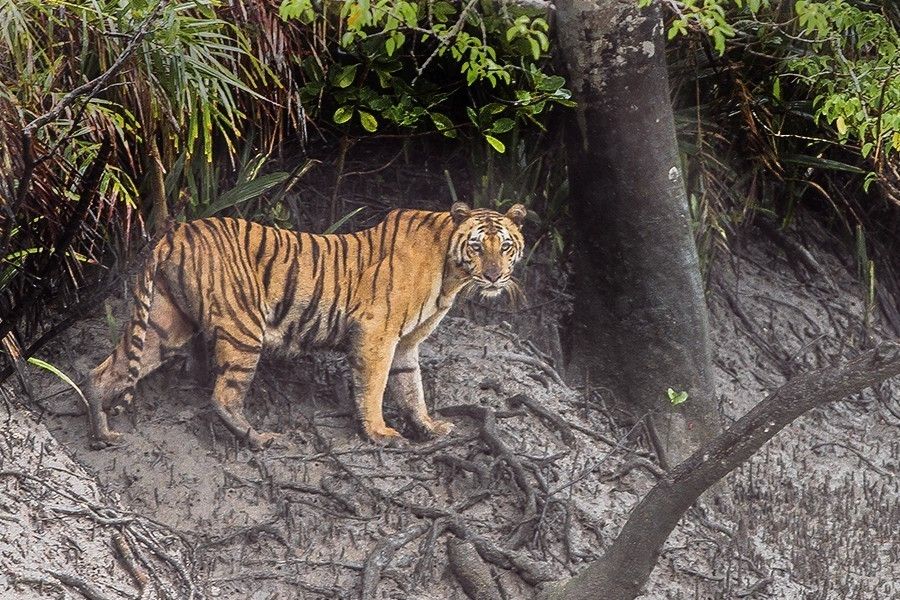 The coal plant would greatly damage the Sundarbans’ surrounding ecosystem, threaten the human rights of thousands and contribute to runaway climate change. Indeed, as a nation, Bangladesh is one of the countries most vulnerable to the impacts of climate change in the world; its people cannot afford for any more coal to be burned. 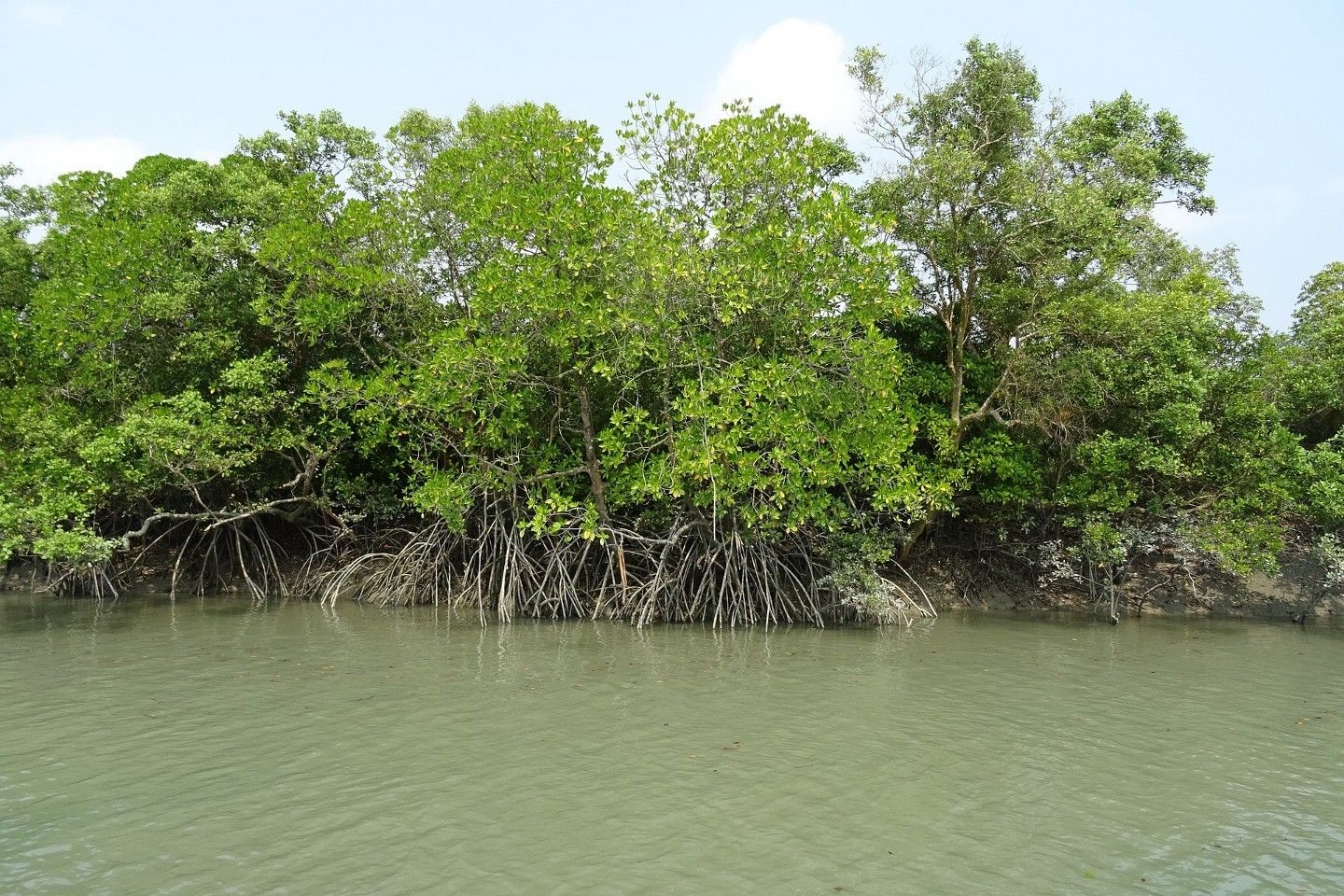 An Op-Ed that Ex-Im Bank Chairman Fred Hochberg wrote about his trip to Bangladesh in February of 2016 demonstrates Ex-Im Bank’s interest in financing projects there. Indeed, under Hochberg’s tenure, Ex-Im has supported more than $650 million in U.S. exports to Bangladesh. The status of the Orion-Khulna coal plant is currently unknown, since Ex-Im Bank has provided so little information about its involvement in the project. However, recent news indicates the Orion-Khulna project could move forward soon. Another massive coal project proposed to be built near the Sundarbans, the Rampal coal plant, just secured financing from India’s Export-Import Bank. According to local Bangladeshi groups, if the Rampal project proceeds, Orion-Khulna will follow soon after.

Another reason for Americans to be concerned about this international issue is one of the largest U.S. corporations, and a serial environmental polluter and tax evader, General Electric (GE), is slated to receive U.S. Ex-Im financing for its involvement in the construction of the Orion-Khulna coal plant. GE is no stranger to controversy. GE’s poor environmental track record includes polluting the Hudson River with toxic waste water from 1947 to 1977 and supplying the nuclear reactors that faltered and led to the Fukushima nuclear plant explosion in 2011. GE, one of the long-running top beneficiaries of Ex-Im—the second largest recipient of Ex-Im financing after Boeing, is contracted to supply the turbine generators for the Orion-Khulna coal plant. Since acquiring the French power company Alstom, GE has expressed a renewed interest in coal throughout the world, including in Southeast Asia.

Now, present day, here is why the new Freedom of Information Act (FOIA) documents matter: the heavily redacted FOIA documents we obtained reveal further evidence to support the claim that U.S. Ex-Im Bank is considering financing for the Orion-Khulna project and that GE is involved. 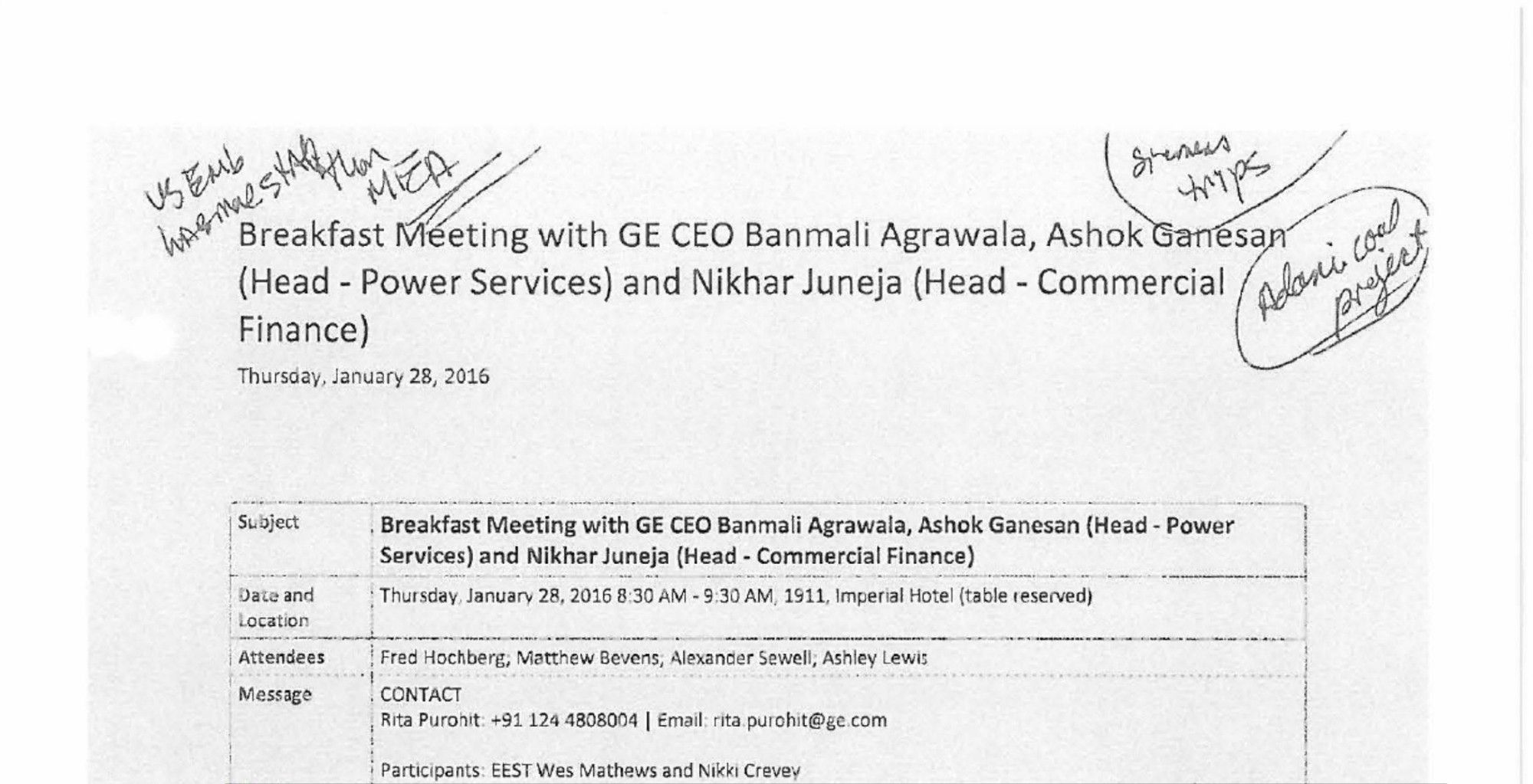 They show that Ex-Im Bank was in talks as late as February 2016 with Bangladeshi government officials and GE about coal projects, which most likely include the Orion-Khulna coal plant. The FOIA documents show that during Ex-Im Bank Chairman Hochberg’s February visit to Bangladesh, he met with high-ranking officials from Bangladesh’s power ministry and energy sector, including the energy advisor and directors from GE. GE’s alleged involvement in the Orion-Khulna project and expressed interest in building more coal projects in Southeast Asia suggest that Hochberg very likely discussed financing the Orion coal projects in these meetings.

In addition, a note that merely said “Adani coal project,” was scribbled on a document from the meeting between Fred Hochberg and GE officials. Adani Group is an Indian conglomerate made up of various subsidiary companies, including Adani Mining, which operates in Australia, Indonesia and other coal-rich countries. This leads to troubling speculation that Australian coal from the controversial Adani-owned Carmichael coal mine and the Abbott Point coal export terminal, which poses grave threats to the Great Barrier Reef, could supply the coal for Orion’s coal projects in Bangladesh.

India has indeed recently said they plan on increasing their coal exports to Bangladesh. This statement further supports the theory that the coal used for the Orion coal plants will come from Adani’s problematic Australia coal projects. As it happens, Ex-Im Bank is also considering financing Adani’s Carmichael coal mine project. Although pure speculation, if Adani’s coal projects in Australia ended up supplying coal for the Orion projects in Bangladesh, the U.S government would be entangled in climate disaster and social and environmental destruction across multiple levels.

Given the recent actions the U.S. has taken to address climate change, it’s very troubling that the U.S. government is still considering financing coal projects at all. Supporting new coal development greatly undermines President Obama’s much-touted climate legacy, including his commitment under the Climate Action Plan to restrict financing coal plants overseas and the recent formal U.S. commitment to the Paris agreement, which aspires to limit global temperature rise to no more than 1.5 degrees Celsius and thus rules out any question of U.S. investment in coal. This also raises questions about what other fossil fuel projects Ex-Im is considering financing.

Despite the schemes of Big Business and bad political actors, people around the world are successfully challenging the coal equation. Ex-Im Bank’s response regarding the Orion-Dhaka project came as a result of pressure from activists and civil society groups in Bangladesh and the U.S., who sent more than 156,000 petition signatures to Ex-Im Bank in late June. The petition asked Ex-Im Bank to publicly reject financing for Orion’s coal projects. A strong grassroots movement in Bangladesh is fighting to protect the Sundarbans from coal development. There have been two marches over the past several years attended by hundreds of thousands of people in Bangladesh. 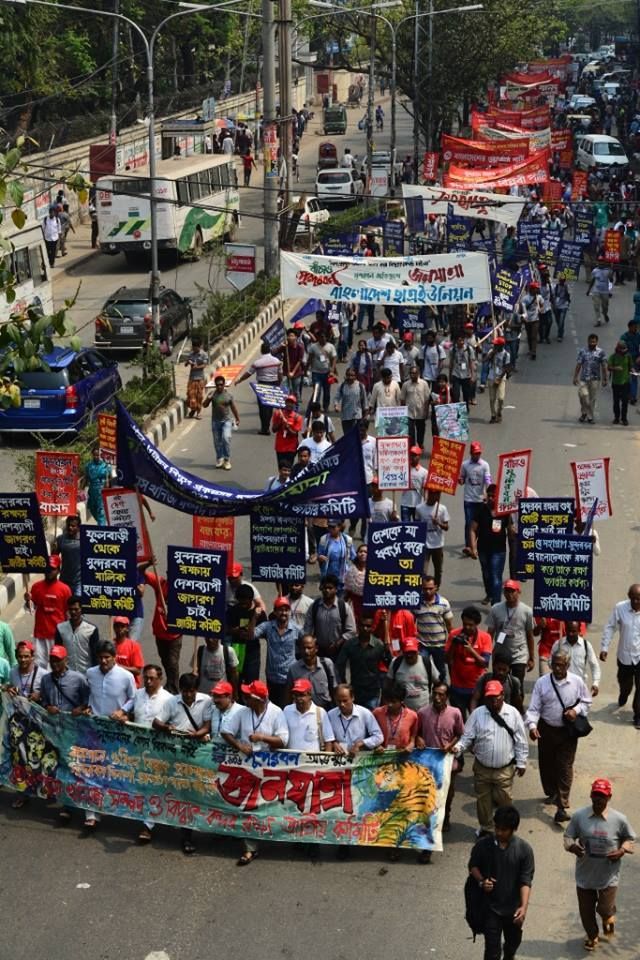 Most recently, a student was arrested for posting a comment on Facebook criticizing the Bangladeshi government’s support for the Rampal coal plant. The people have spoken: New coal development is toxic to our environment and human health, and we refuse to accept the status quo anymore.

The fight to protect the Sundarbans is not only gaining momentum in Bangladesh, it has become an international issue. This past year Save the Sundarbans protests have been held in Paris, Washington DC, Atlanta and New York. 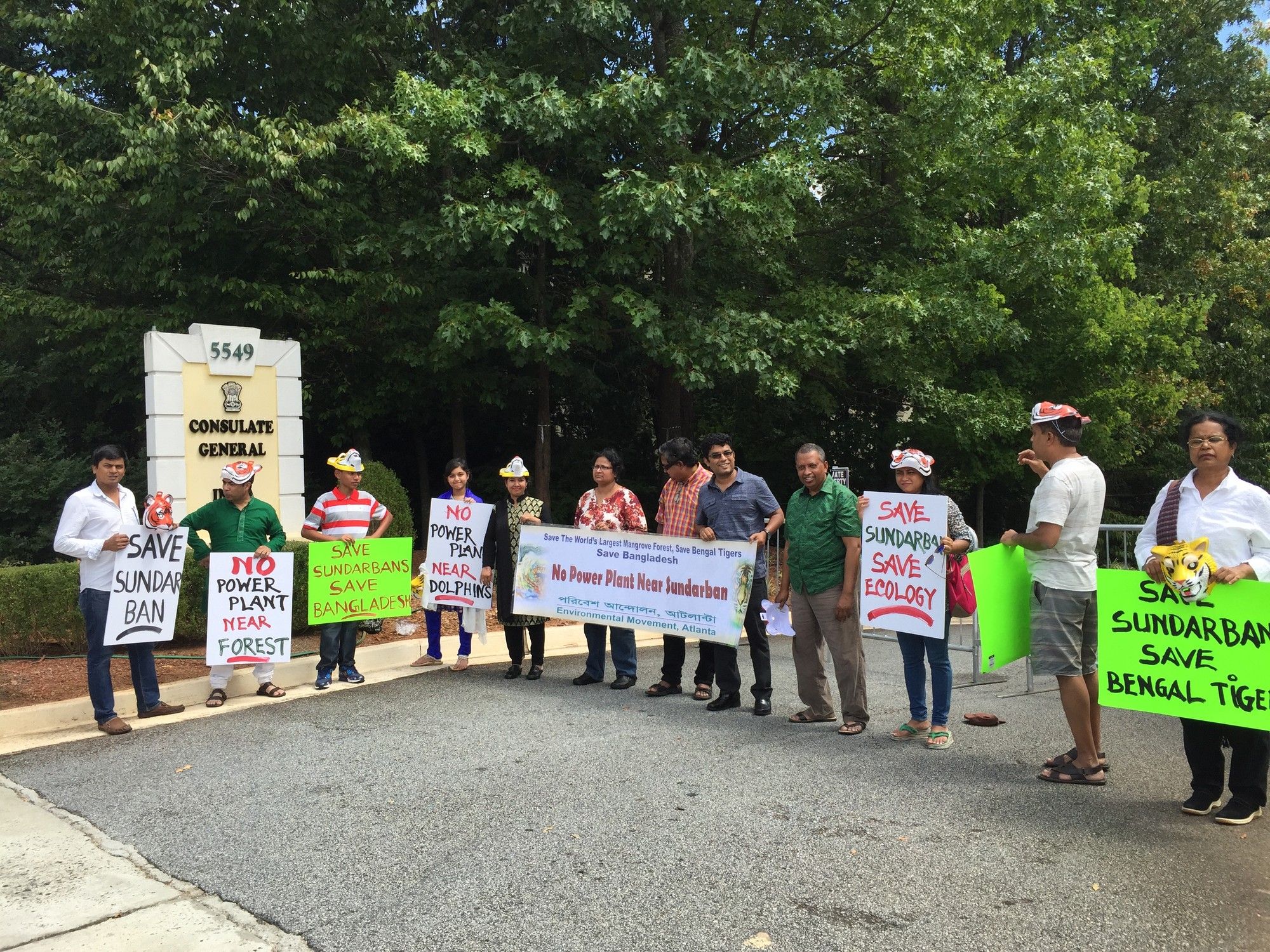 Atlanta chapter of Bangladeshi environmental group holding a Save the Sundarbans protest at the Indian Consulate in Atlanta, Georgia, Sept. 2016.Mohammad Nasir Uddin 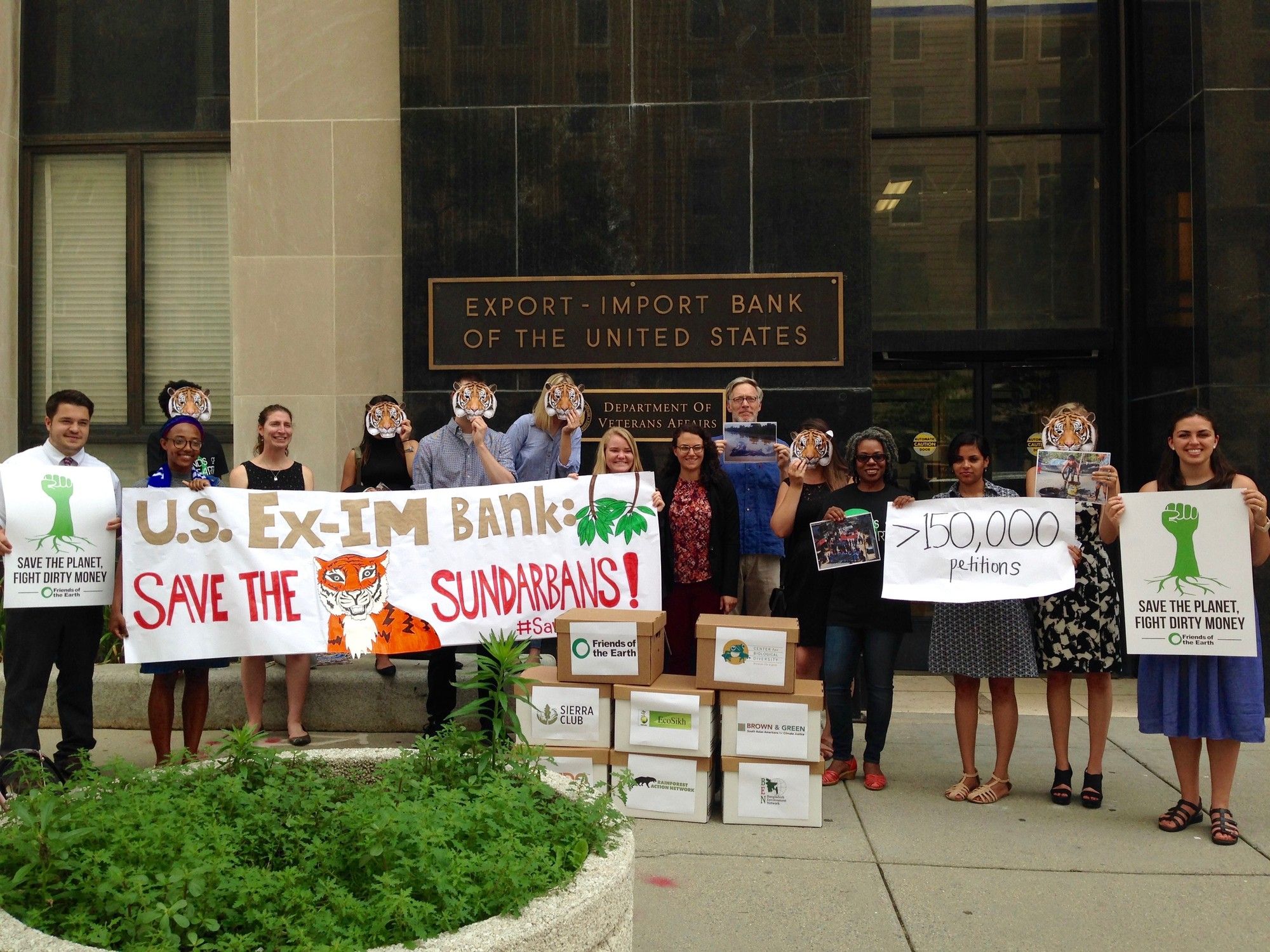 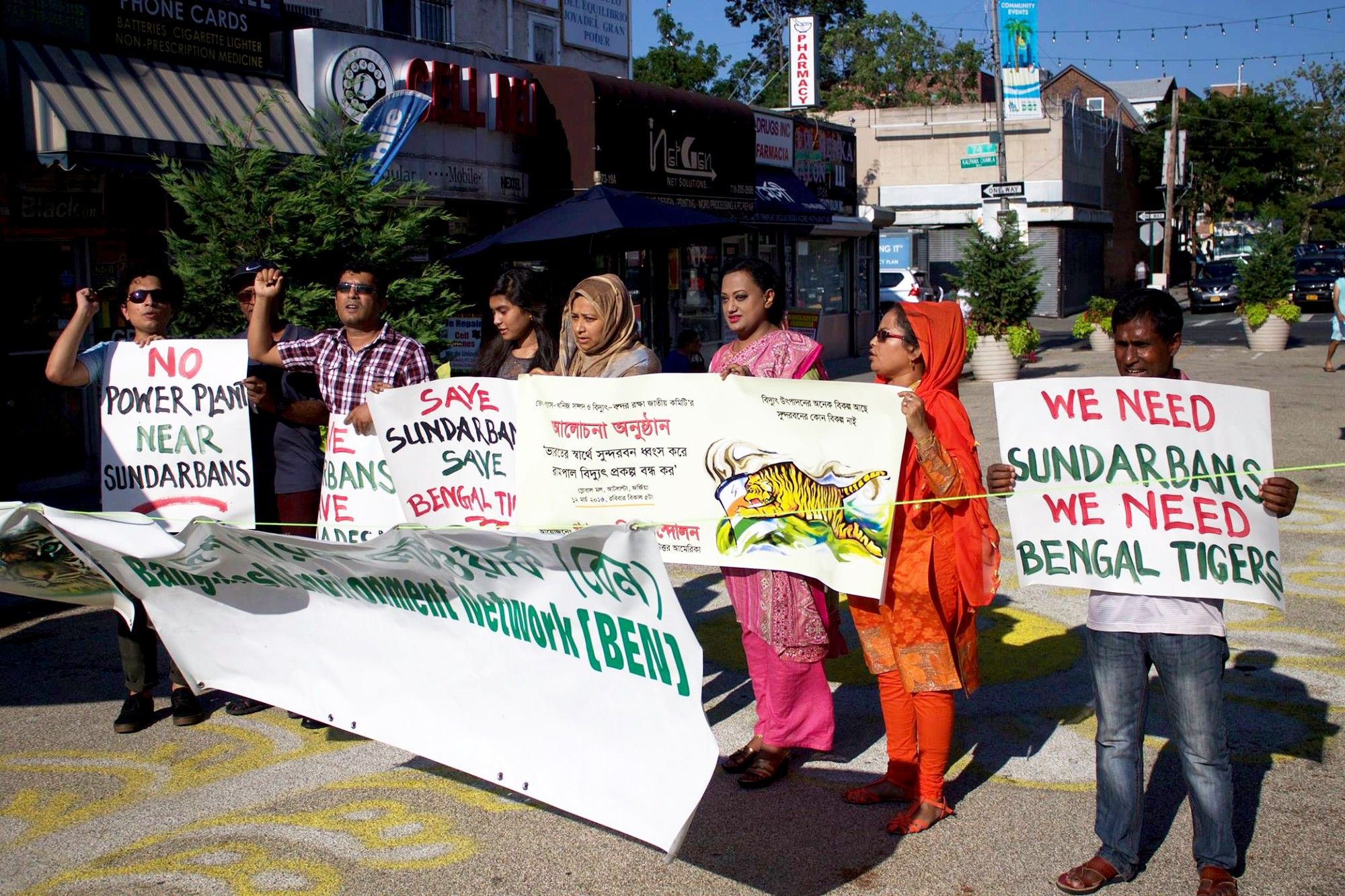 This growing movement came full circle today, when environmental groups and local Bangladeshi and Indian-American activists held a Save the Sundarbans protest in New York City while President Obama and Bangladesh’s Prime Minister Sheikh Hasina attended a UN General Assembly meeting. Protesters called for the Sundarbans to be protected and for an end to harmful coal projects in Bangladesh.

To honor the U.S.’s commitment to fight climate change and preserve a livable planet for future generations and for the sake of the people and wildlife who call the Sundarbans home in Bangladesh, U.S. Ex-Im Bank must publicly reject financing for the Orion-Khulna coal plant, once and for all.